First of all I would like to thank DUNU for sending me the Titan 1 for review. After having previously reviewed their Dunu I 3C-S, I was a little surprised to have been contacted by them. The Titan 1 can be purchased from AmazonUK for £90 and AmazonUSA for $135. 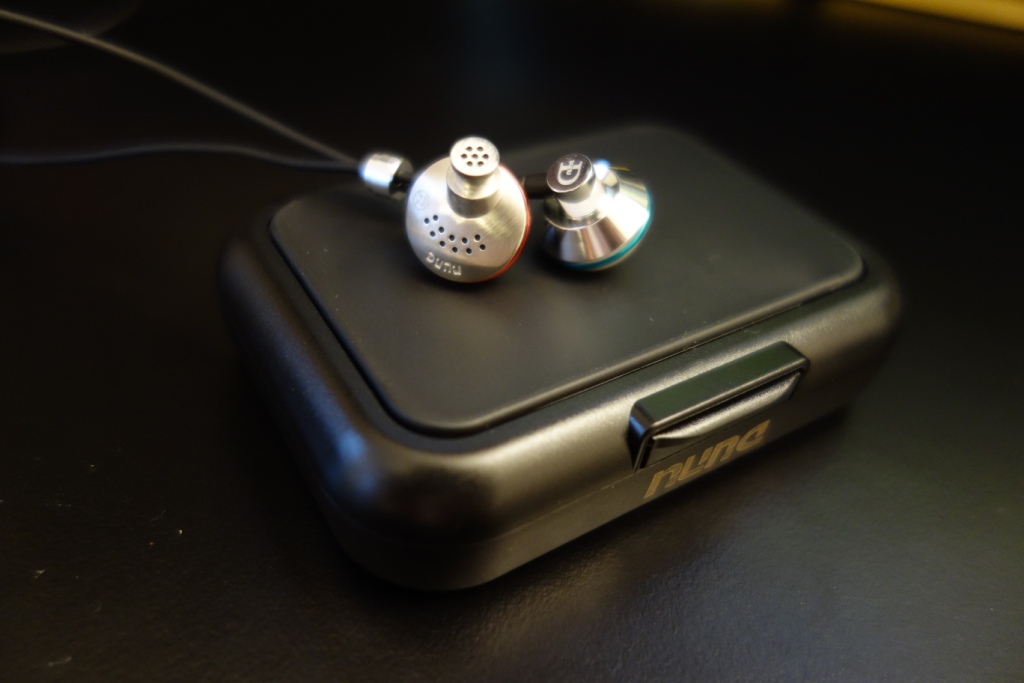 Here’s my video review of the Titan 1:

Now let’s get to the written review! 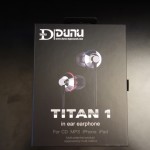 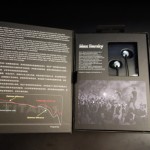 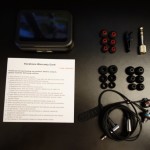 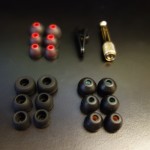 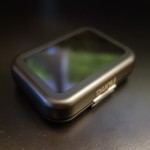 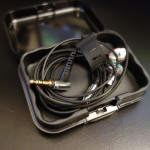 The contents are vast and really are perfect. The only thing I would have liked to see on-top would have been some foam tips and a soft carrying pouch. The contents for the price however are sensational and it’s nice to see a manufacturer catering for different sized ears with a nice selection of tips.
The carrying case is quite interesting – as on one side it has a glossy look, where you could even use it as a mirror of sorts to check your earphone placement. On the other side of the case, it has a rubber material which prevents it from sliding – a nice touch to have!
The case itself is also secured by a locking mechanism, meaning you can safely place your earphones in here and not worry about them falling out of their case.

Overall I was extremely impressed by the amount of tips included and quite liked the hard carrying case that DUNU included.

The build quality is very good, albeit not perfect.
There are three things that concern me on the Titan 1s – the thin strain relief found by the earphone’s housing is quite thin. This especially isn’t aided by the fact that the housing is also quite heavy, due to it being made out of metal. 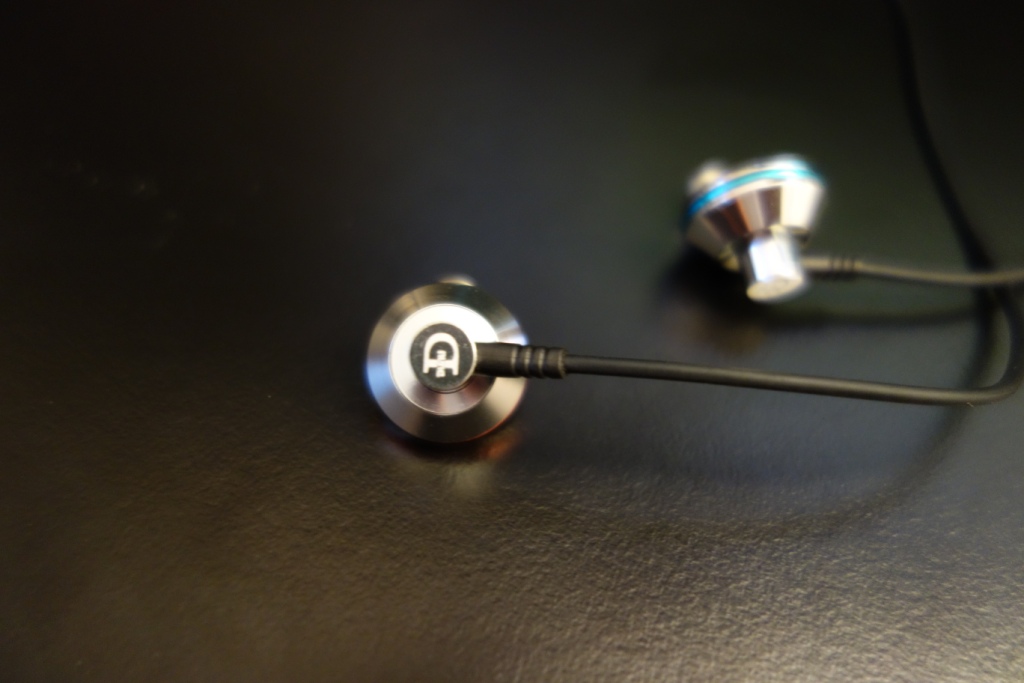 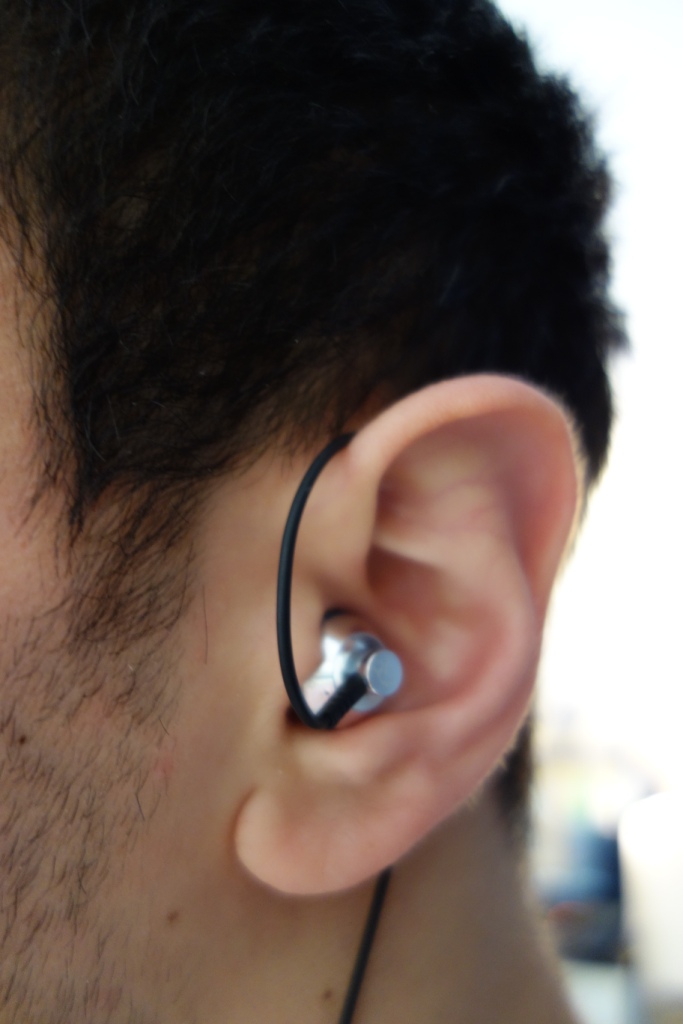 The final point, which leads on from the cable noise, is the cable itself. At first glance I really liked the fact that the cable is sleeved whilst also being rubberised by the Y split. However, after having used them on a daily basis, I found that the wire got tangled far too easily. This comes from the way the cable is made and I found the similar problems with the Monoprice 8320s, which had a similar-esk cable design. 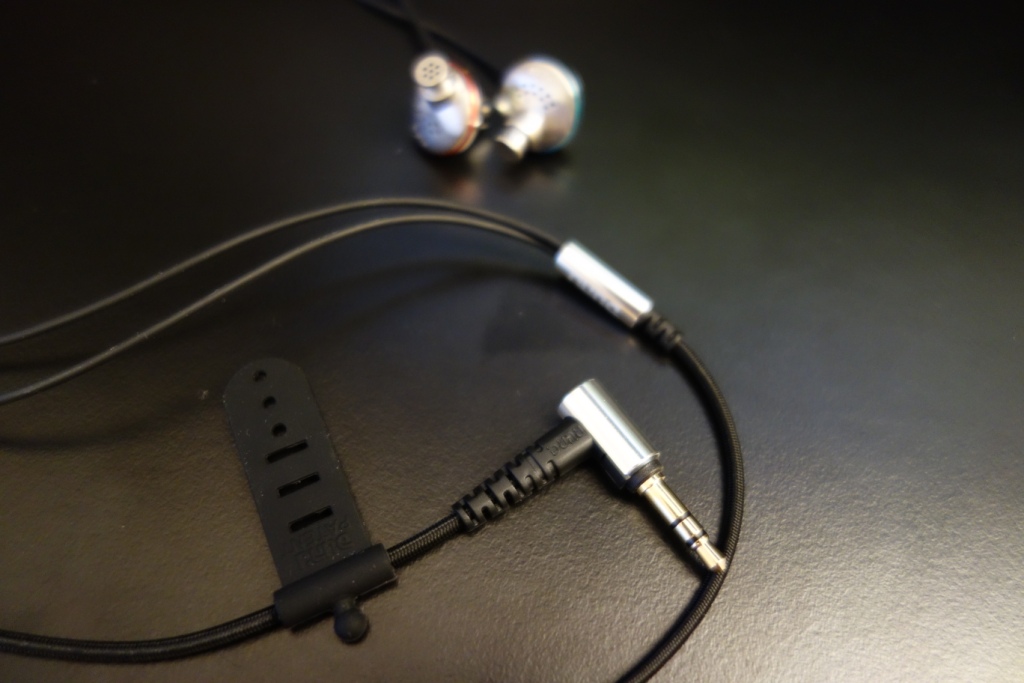 Other than these three points, I found the build quality to be excellent. The earphones are terminated by a right-angled gold-plated 3.5mm jack. Along the cable there’s an included soft cable management piece, which without the use of scissors to cut it, cannot be removed. Moving down the cable, the Y split is a very nice looking splitter with the “Titan 1” and “DUNU” logos written on it – the splitter piece is also very nice. These are small things, but its these small things that make the build quality of the earphone. 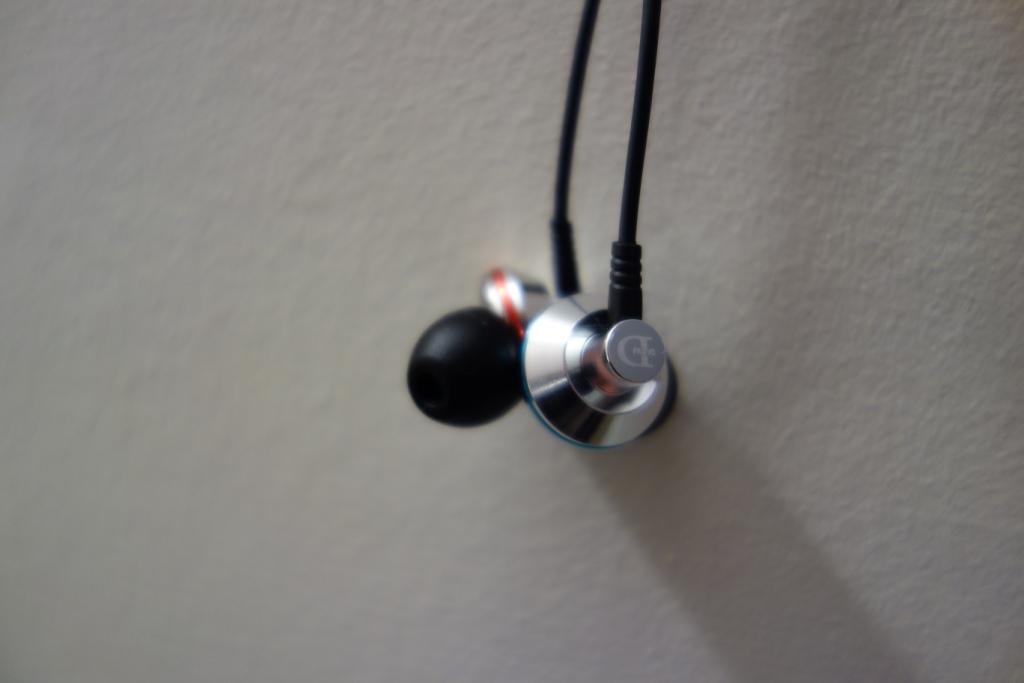 The earphones themselves look really nice, in fact they remind me of some old Sony MDR-EX 85s I used to own, which were one of the first in-ears I ever bought, back in 2008!
The design and build of the earphones is extremely solid, to the point I could see someone in the military using them and still working. They have a full-metal body which means that they can survive quite a lot of pounding. This however means that they’re quite heavy on the ears, especially when worn straight down, and also get quite cold during the night!
What I love most about the construction about the earphones is the fact that they have a blue and red ring about the earphones, to demonstrate the left and right side indicators. This is something that I’ve previously seen in the Monster in-ear range. I really like this type of design as it is easy to see which earphone is meant to be in your left and right ear respectively. Again this is something small to note, but it all plays a part. 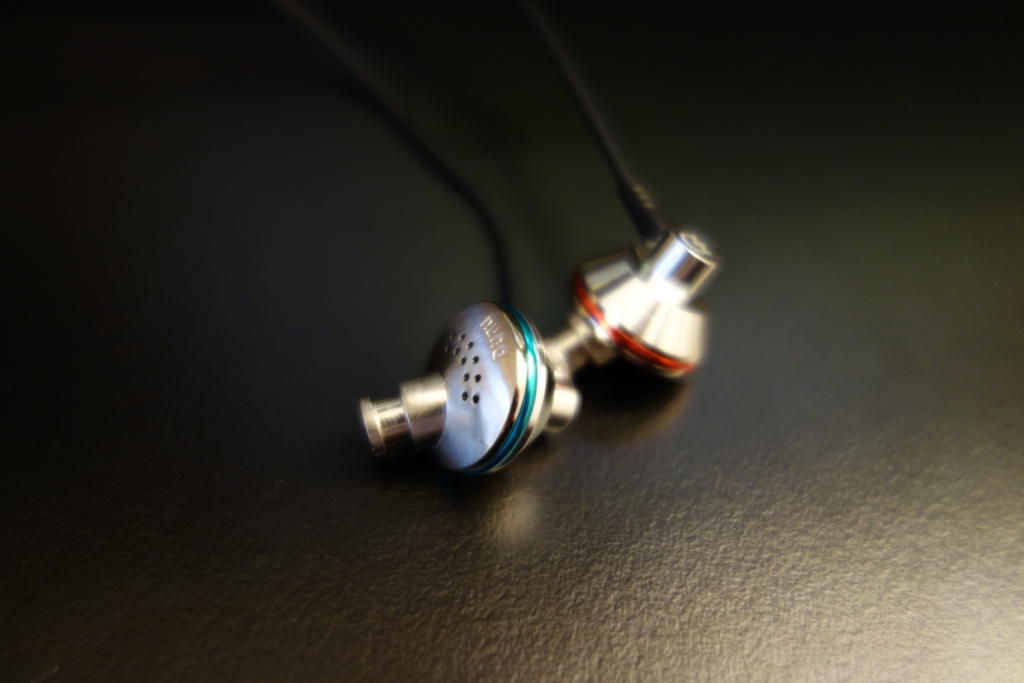 Overall the build quality was extremely good, there were a few small points which could have been improved but I thought that DUNU did an excellent job here.

Looks:
The looks, as previously stated reminded me of an old pair of Sony’s – is that a bad thing? Quite the opposite, I really like the older design and look of these Titan 1s – they were and still are an extremely popular design. 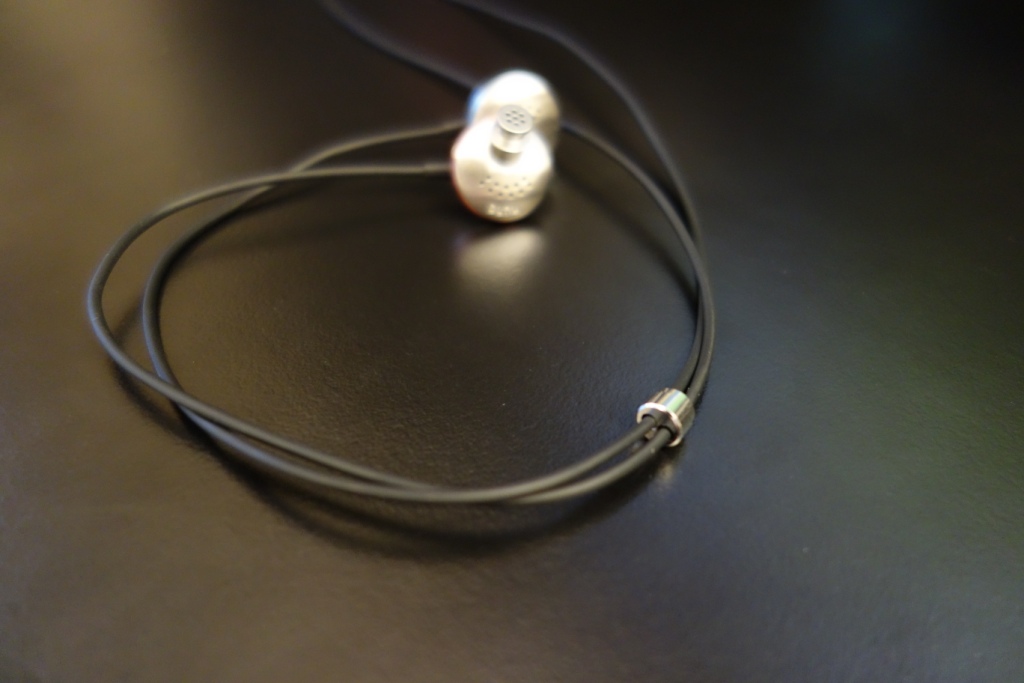 I personally really like the look of the earphones, it somewhat reminds me of an old fighter jet’s design, or even a classic old car. A simple, raw design that does what it says on the tin.
As previously stated, I really do like the design and looks of the red/blue ring, which indicate the side of the earphones.

Isolation:
The isolation of the earphones aren’t great for an in-ear, and this mainly comes down to their design and the fact that they have ports located on the inside of the housing. This means that there is a little bit of sound leakage whilst listening to the earphones and a lack of isolation that comes with it. 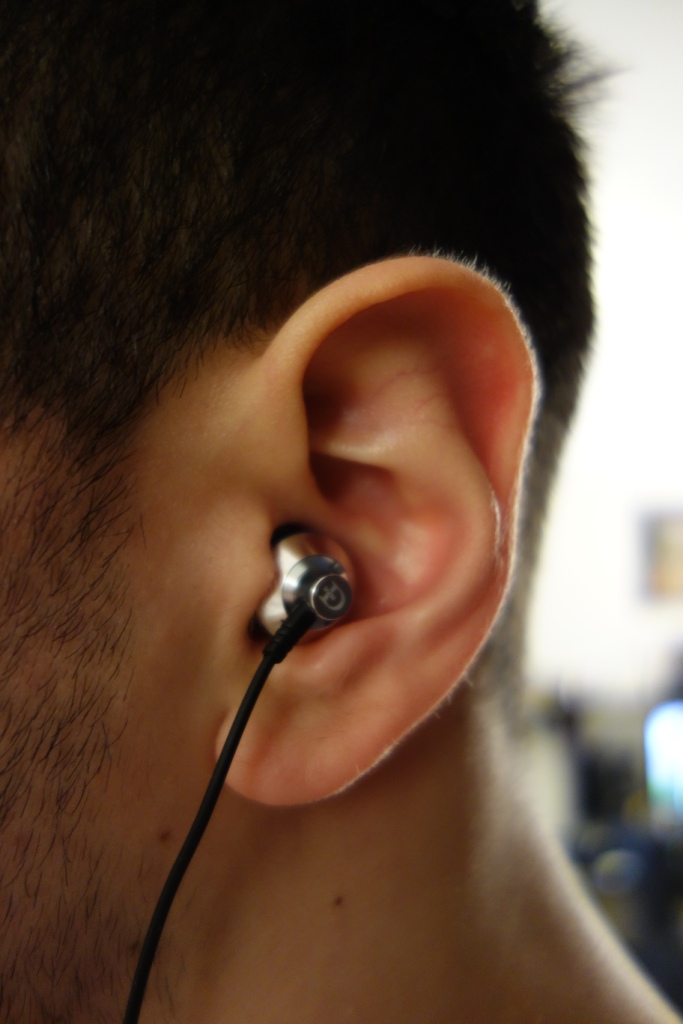 Comfort:
The earphones were comfortable to an extent, however due to the microphonics problem, I had to wear them over-the-ear in order to really wear them without discomfort to my ear drums.
As stated previously in the review, the earphone’s housing is made out of metal and therefore they are heavy earphones. This means it does cause slight problem when it comes to comfort, as over time or during a jogging session they will fall out. This was an inherent problem with my Sony EX85s and it’s no different with the physically heavier, Titan 1s. 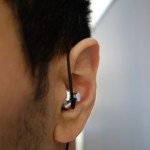 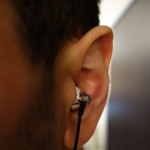 The sound quality is something I was really looking for and right from the offset I was impressed. However with a little burn-in the earphones really opened up and I was really impressed with their sound, so much so that I was jaw dropped at their given price-point.
The lows, mids and highs were extremely good, so much so that they rank in the top earphones I’ve heard and reviewed to date. I even compared them to the likes of the Phonak Audéo PFE232s and the Sennheiser IE800s, earphones that at base price cost near 4-6x as much. The Titan 1s, for their price-point are pretty unbeatable. I tried comparing them to earphones that I felt were a fair fight, such as the Fischer Audio Consonance and the Steelseries Flux In-Ear Pro, where both didn’t stand a chance. 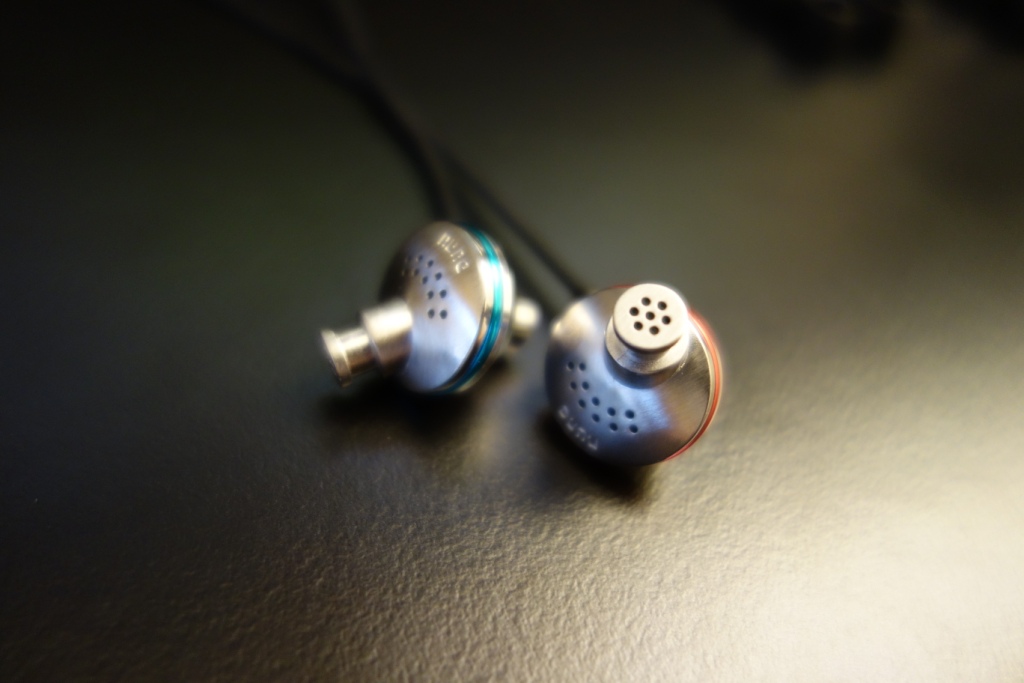 Lows:
The lows are extremely well done, the Titan 1s extend well whilst having a good mid-bass slam.
I felt the sub-bass could have been slightly improved, but on the whole they were really well presented and extended to a decent amount.
The mid-bass did have a nice slam and more so didn’t really feel that it leaked into the mids much, which was nice to hear for a change.

Mids/highs:
The mids were by far the most impressive to me – despite the mid-bass slam, the mids weren’t all that affected. I didn’t feel that the mids were recessed nor pushed back by anyway, where they shined through and produced an absolutely amazing response. The mids were definitely my favourite part of the sound signature, as they had a slightly cold decay (which would be down to the choice of material used in their housing) and this created a somewhat cold/neutral sounding earphone.
The highs were also excellent, although they did roll off slightly at the higher end. The highs did have an excellent sparkle and coupled with the “cold” sound that the earphones gave, it brought some life to their overall sound signature. I thought the high frequency extension could have been slightly better, but at the given price it’s punching well above its weight.

Soundstage:
The soundstage was extremely impressive, and this mainly came down to the design of the earphones. In a quiet area the earphones had a fantastic open sound to them which sounded near perfect to my ears. I felt that it could have been slightly improved in its depth and slightly in its width, but on the whole the Titan 1s delivered a fantastic soundstage, which produced an excellent overall listening experience. 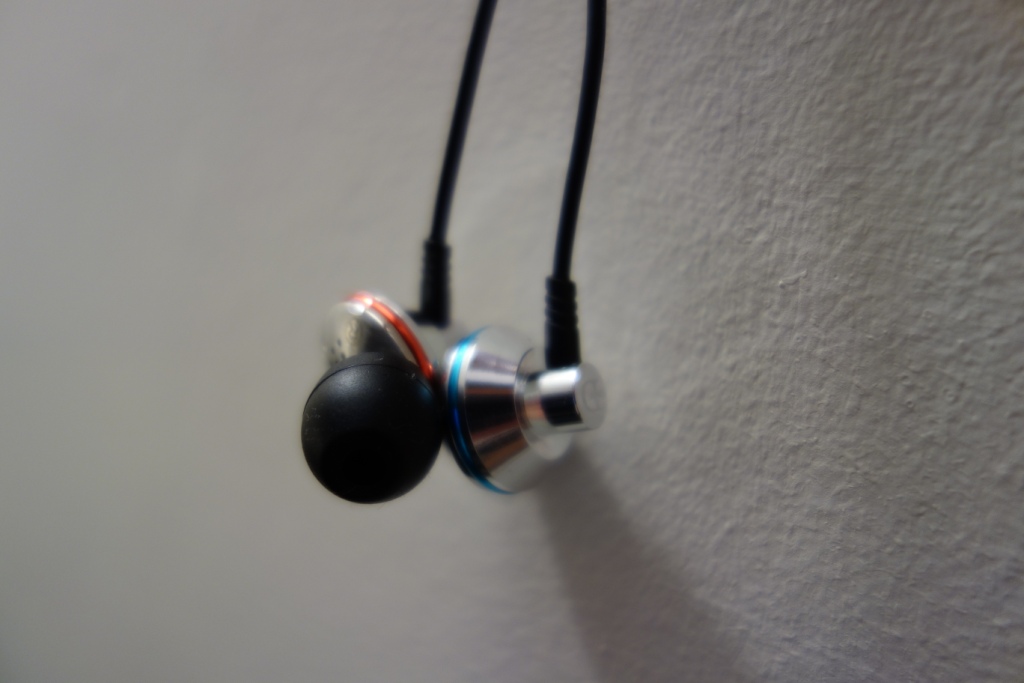 Overall these earphones not only deliver in terms of sound quality but also as an overall package. DUNU have done a fantastic job with the Titan 1 and it’s impressive to see such a good sound come out of an affordable earphone. At £90 I can’t think of any earphone that really comes close to it.
The Titan 1 has to be in your top to-buy list for earphones that are under the £250 mark, let alone £90 – I think these compete at such a high level and punch well above their weight that it makes the recommendation for these earphones extremely easy! Top mark to DUNU and I can’t give them anything less than a full 10/10 review, which is something that rarely happens!