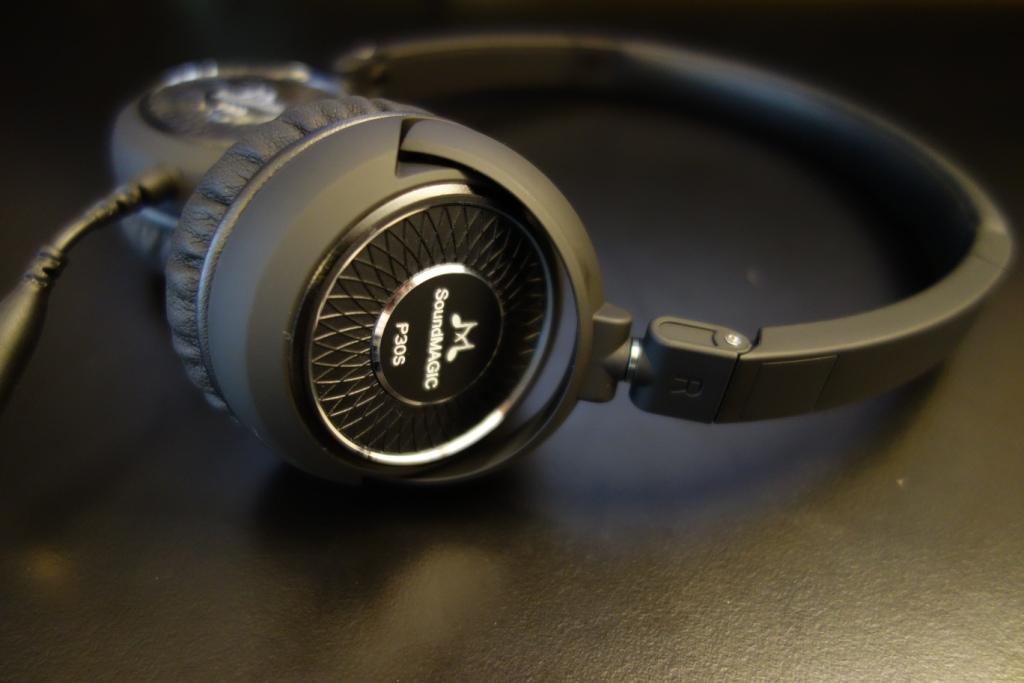 First of all I would like to thank Mark from KS Distribution for sending me these SoundMAGIC headphones for review.
They can be bought from a variety of sources including:
–AmazonUK for £70
–The non-mic version on AmazonUSA for $50

More information on the SoundMAGIC P21S can be found on their website.

Before getting into this written review, here’s my video review:

The packaging is minimalistic, but the contents are far from it.
In the package you receive the headphones alongside a 3.5mm adapter for the PC, two detachable cables, one of which has a microphone and a hard carrying pouch. It’s nice to see these accessories included, especially the PC adapter which came as a surprise. Despite knowing it’s a headphone with mic capabilities, it’s very rare to receive a headphone, that’s not marketed as a headset, to come with such an adapter.
The pouch itself is really well made and is perfect for the headphones which are designed to be portable and taken on-the-go. Unlike the SoundMAGIC P21S’ soft carrying pouch, this one is hard and can take quite a lot of knocks. The style of the pouch somewhat reminded me of the Fischer Audio DBA-02 MKII earphones. 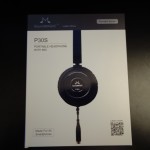 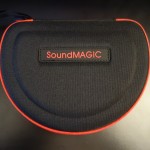 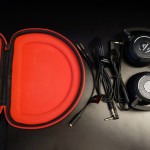 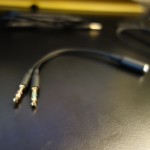 Overall I was extremely impressed with the package contents. At the given price, I would have liked the additional soft carrying pouch to have been included, but that’s just me nit-picking.

The build quality is very good, however once thing that got me by surprise was the headphone jack connection – by that I mean the way a cable is connected to the headphone’s drivers. There is an odd wire that dangles – which of course isn’t a big problem, as you’ll always have a wire connected to it, however I can’t quite understand the logic behind it. Is it to increase longevity? I’m not quite sure myself – either way it’s present and is part of the build quality of the headphone. 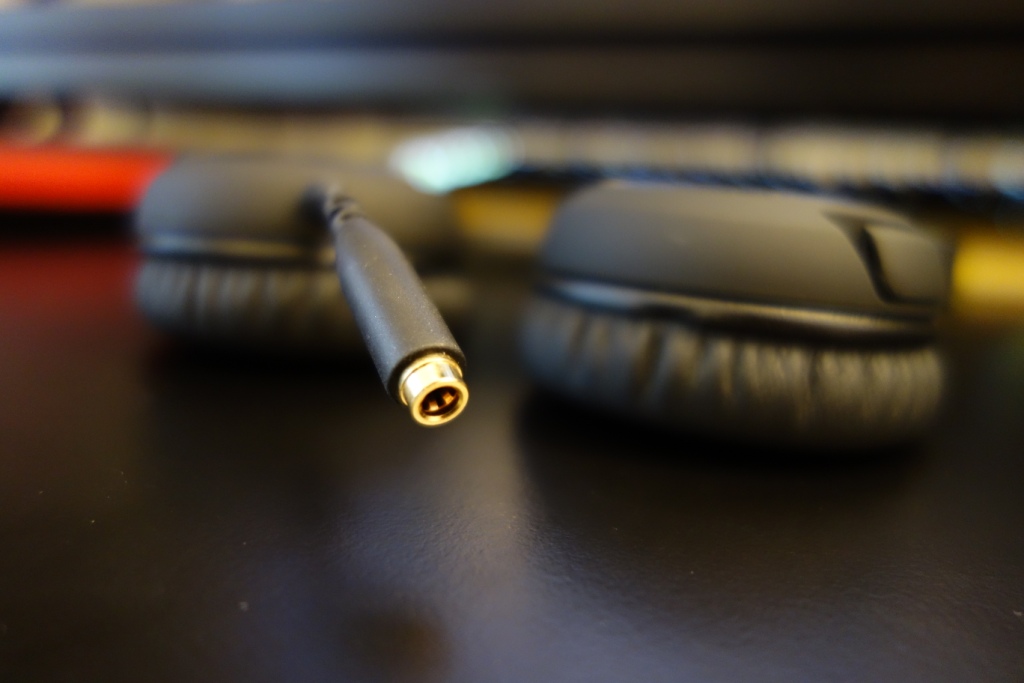 I should also note that this does cause slight microphonics – and this is purely based on this little wire hanging out the headphones – which is a shame as without it I’m pretty sure there wouldn’t have been any cable noise present. The cable noise is very minimal, but still worth pointing out.

Other than the aforementioned points, the build quality is absolutely fantastic.
Starting from the jack (on the cable that comes with a microphone) – I’ve always had the inherent problem of having to deal with “Made for iPhone” headphones, where they won’t work with my PC or some older Android devices. This has to do with the “poles” found on the 3.5mm jacks. In a nutshell Apple, much like a lot of their products work in a different way than the rest of the industry – due to that, headphones are either made for one or the other, rarely for both.
In this respect however the P30S, like the P21S has a clever A/B switch which allows you to invert the poles thereby completely eliminating the problem. This does mean you have a slightly larger than normal 3.5mm jack, however this is a very small price to pay for such a clever and well integrated design found in the jack. 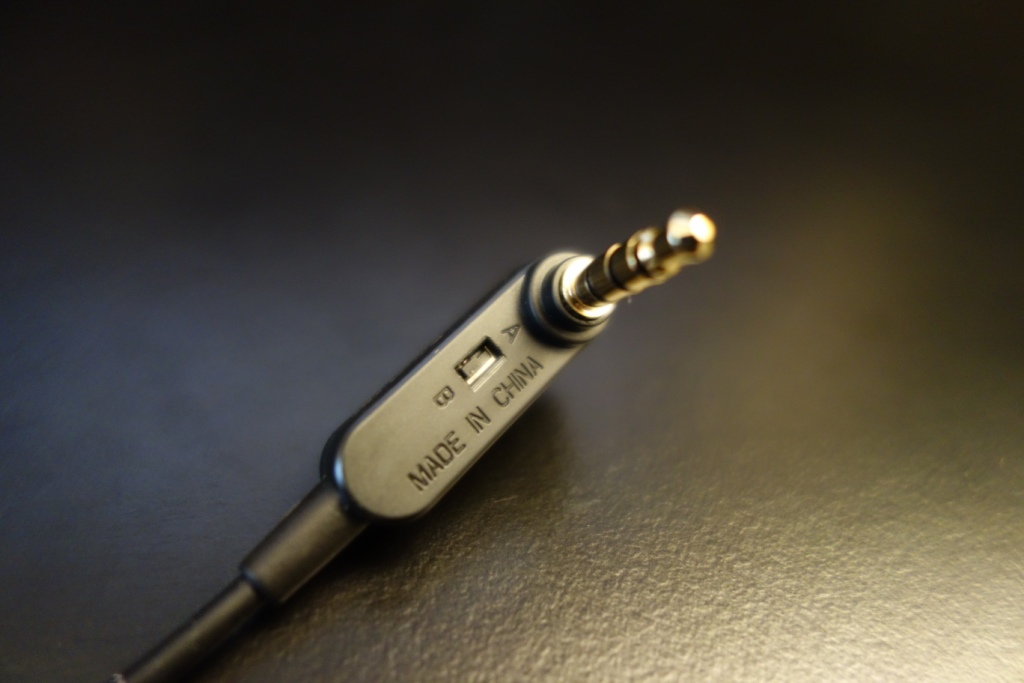 I can’t believe other manufacturers haven’t been adopting this for years now, and finally I’ve come across a headphone that solves it, and this headphone only costs £50 – sensational. So starting from the gold plated right-angled 3.5mm jack, the build quality gives off an excellent impression.

As we move down the mic-enabled cable, there is a one-button remote which allows you to control your music and/or calls by the touch of a button. Due to it having a mic, it can be used on a smartphone; better still it can be also used with a PC, via the included adapter SoundMAGIC have thought to include in the package, allowing you to turn this headphone into a headset – again absolutely brilliant! 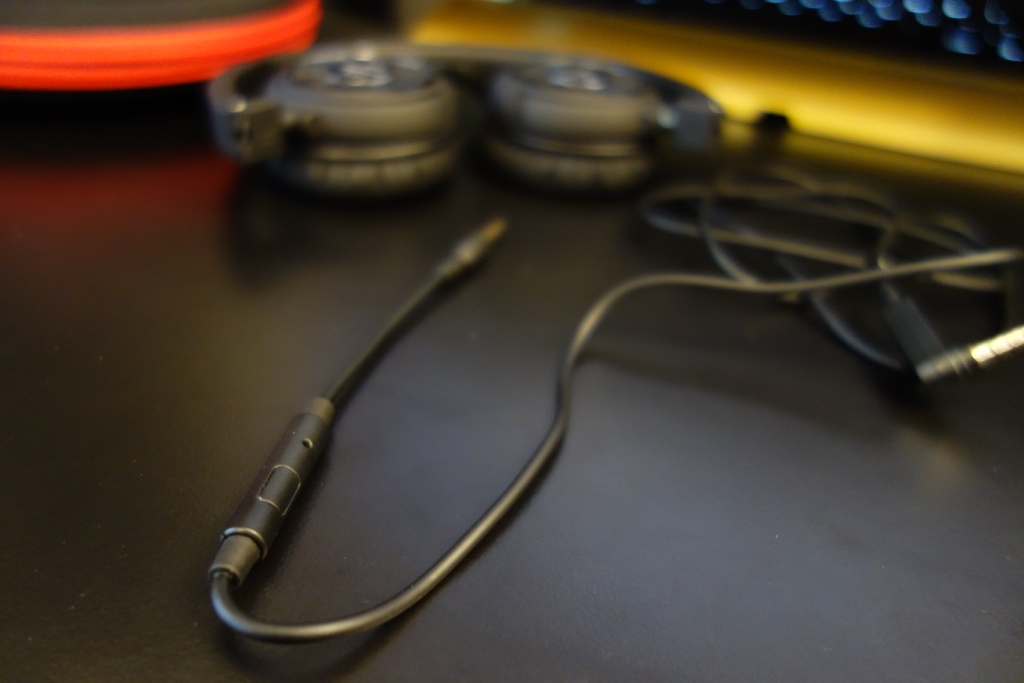 The other cable is a bog-standard 3.5mm connection, which to be honest is there to be used as an additional extra – as I can’t see why someone would use it over the mic-enabled, excellent jack-designed cable. The non-mic cable doesn’t have this intelligent jack design and is terminated by a right-angled gold plated 3.5mm jack. 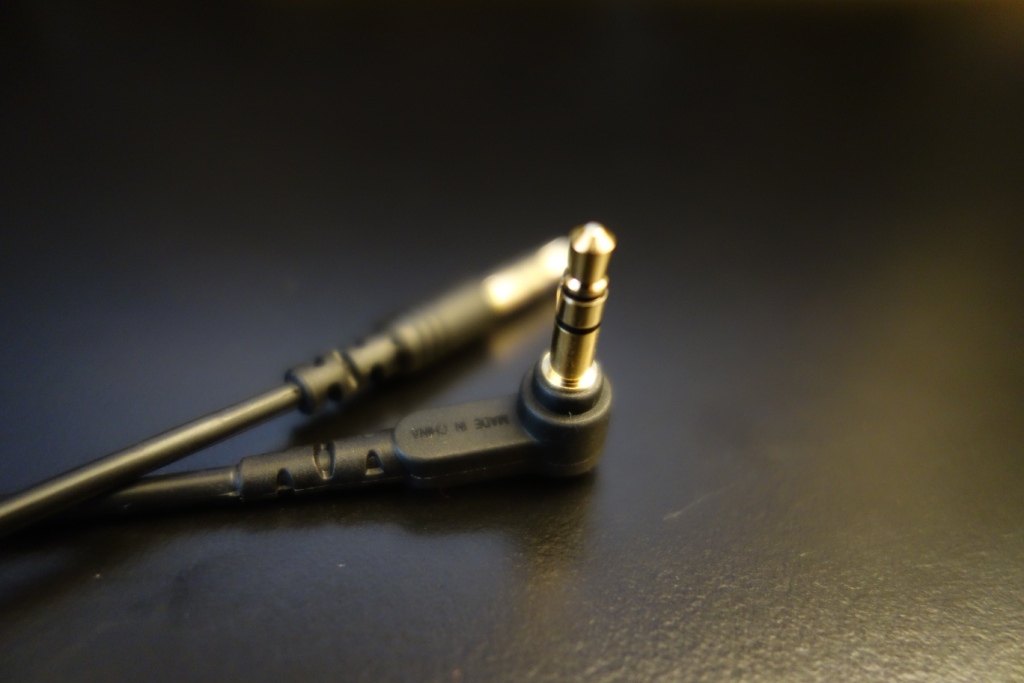 The headphone itself is also well built – starting from the pads, they’re soft and are very comfortable (more on this below). 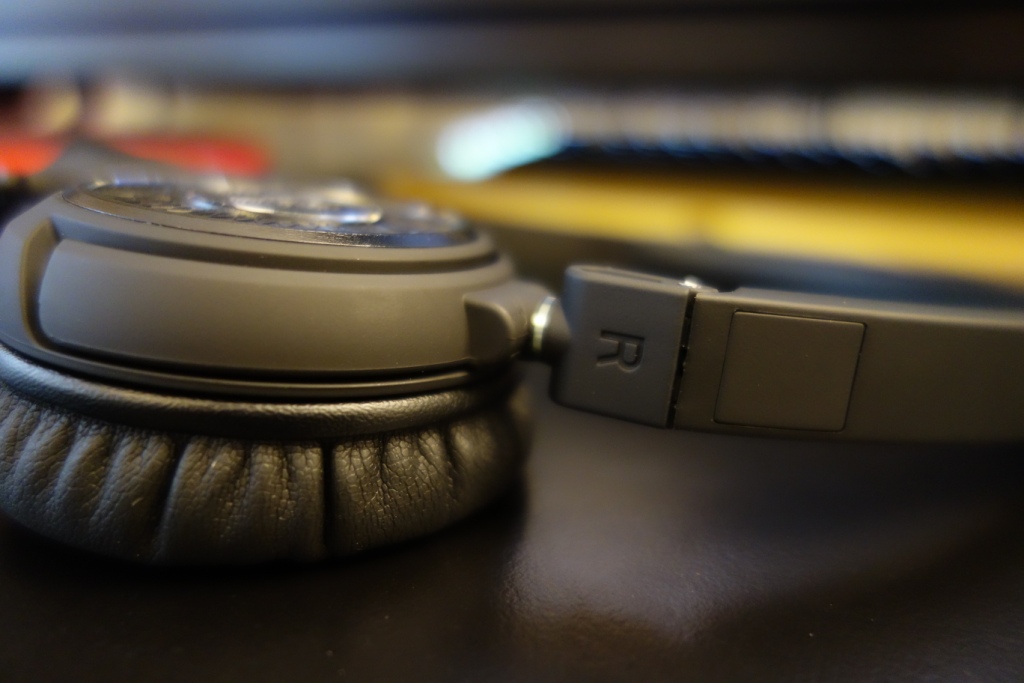 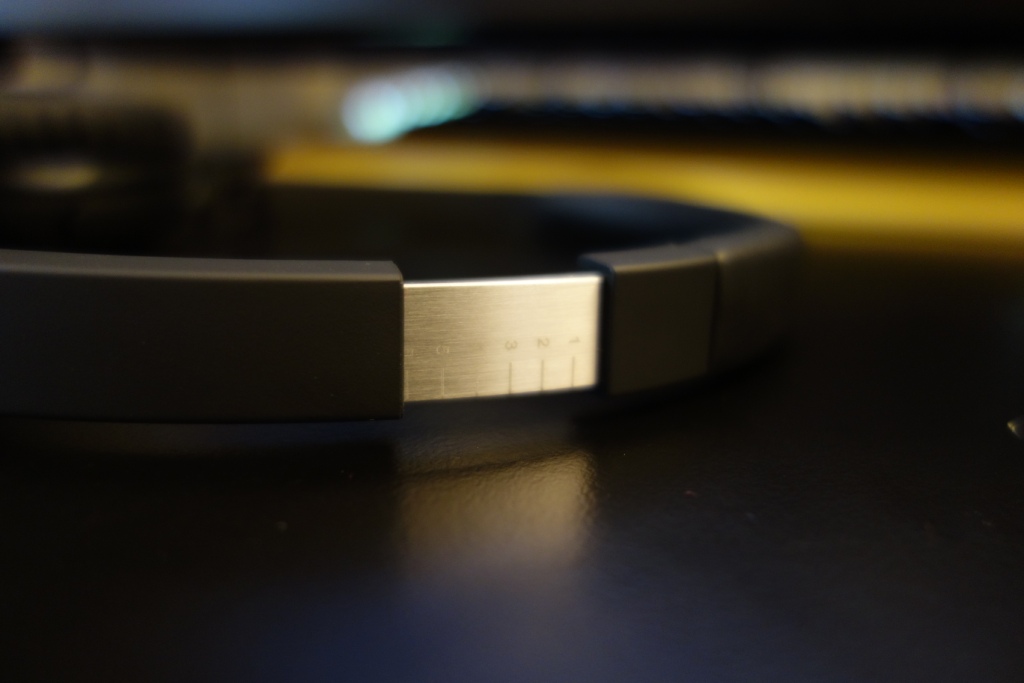 At the top of the headband there’s an extremely minimal amount of padding, which is a shame, as you’ll be able to read in the comfort section – as I found it to be a little on the thin side. I would have liked to see more padding here. I know this is a portable headphone, but still would have liked to see a bit more, at least to the levels of the P21S to say the least. 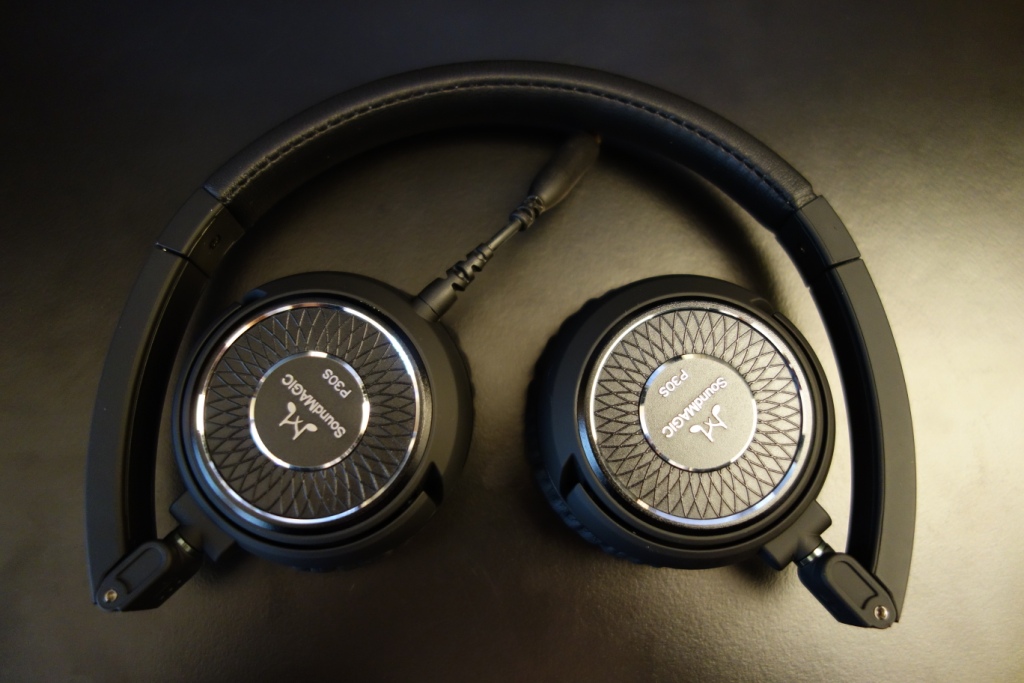 To round off the build quality section, it goes without saying that these headphones are truly portable headphones due to their rotating, pivot-able and foldable headphone design. This means the headphones can be folded and be taken with you on-the-go. It doesn’t fully fold (via the top of the headband), but they’re able to be taken in the provided hard carrying case and put in a bag. 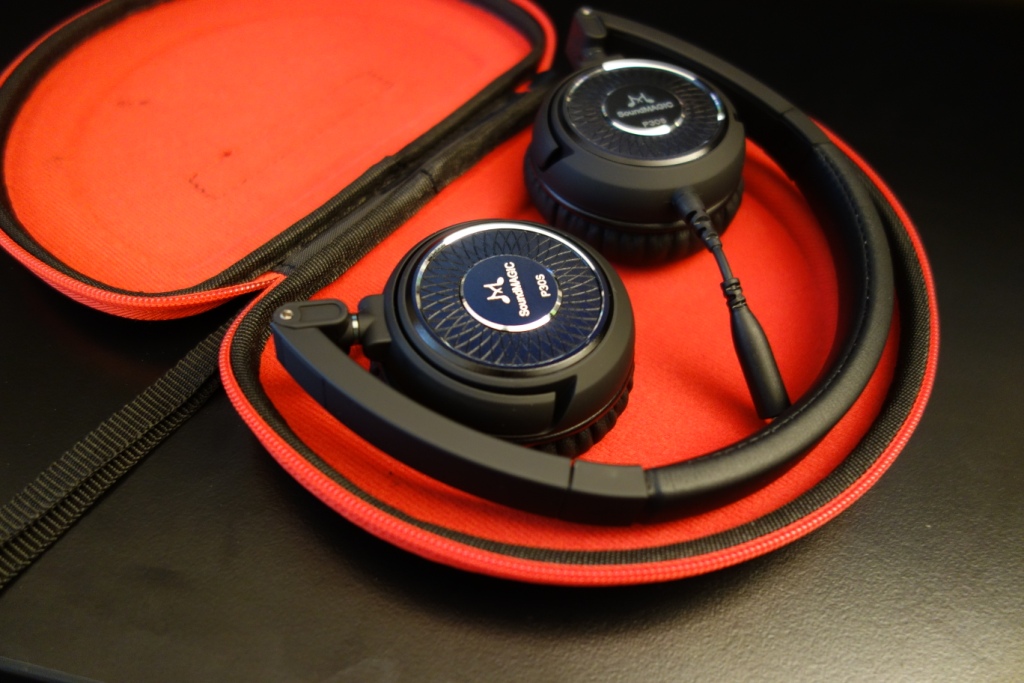 Overall the build quality is almost perfect, but would have been flawless if it wasn’t for the odd cable connection design, and thus slight microphonics.

Looks:
The looks of the headphones are simple and actually remind me of a Grado-esk headphone. Grado are known for making rock-looking and sounding headphones – in this respect the P30Ss do give off this same look, as they have a nice metal finish to them on the driver cups.
To me the headphones look nice, from their small form factor to their Grado headphone look. However, the looks aren’t complemented by the dangling non-removable small cable that is present on the left-hand driver. 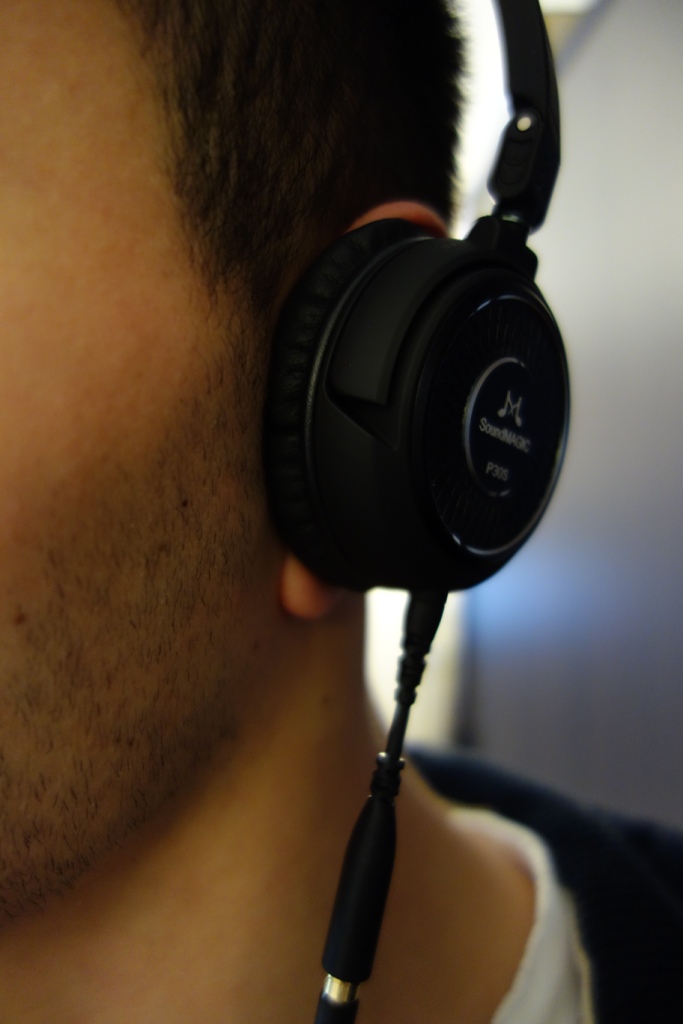 Isolation:
As these are on-ear headphones, it’s to be expected that their isolation isn’t the best in the world. These do however isolate quite well, given their design – where I found them to not leak much music and not to be that negatively influences by external sounds. 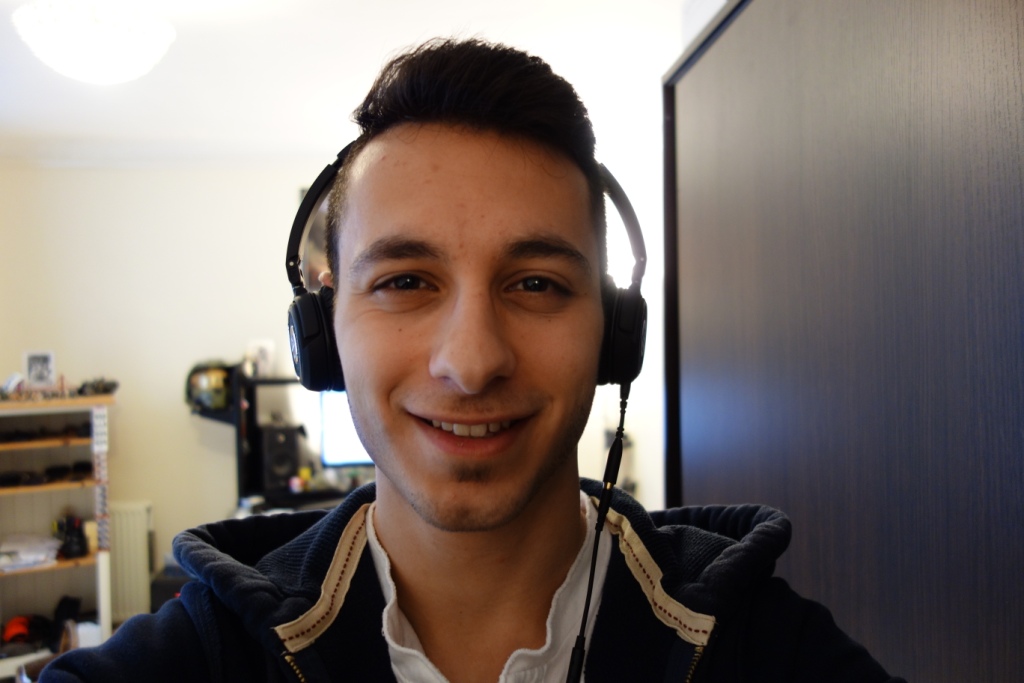 Comfort:
The comfort was very good, albeit not as good as the P21S for me. This came down to the headband lacking quite any real padding. As previously mentioned I understand that this is a portable headphone, but there’s almost no padding on the headphone, meaning when these are worn, you can feel the top of the headband sink into your head over longer listening periods.
This is also not aided by the fact that these headphones are weighted down by the driver design, which has metal on it. 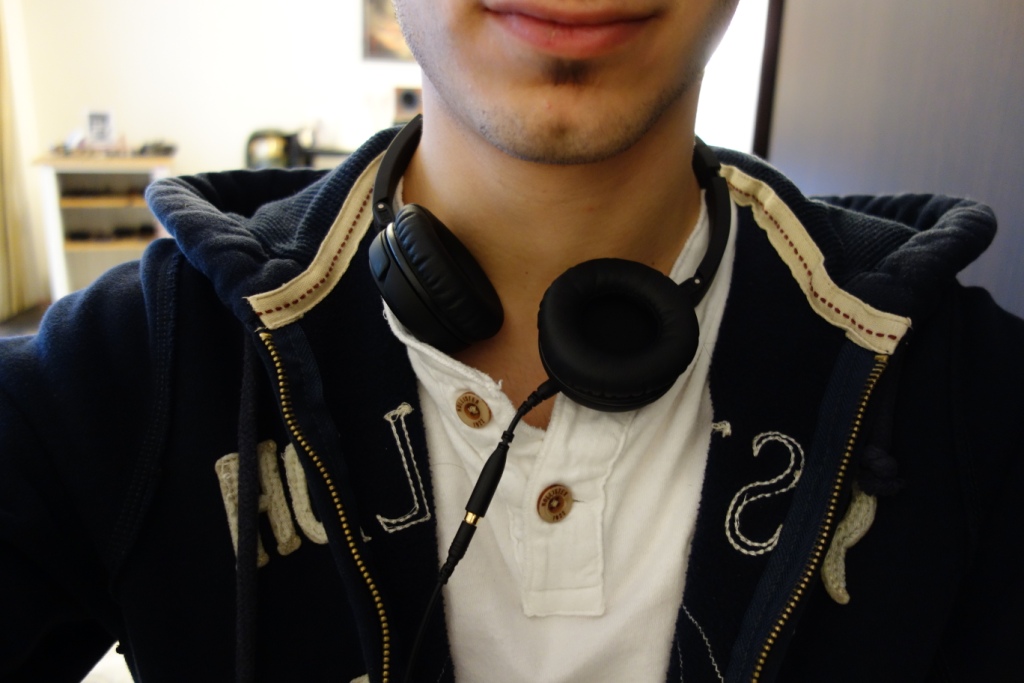 This is me nit-picking, especially after having tried one of the most comfortable on-ear headphones the P21Ss I am heavily scrutinising these more expensive set of SoundMAGIC headphones. Overall the headphones are comfortable and aren’t a problem when being worn for short to medium periods of time. 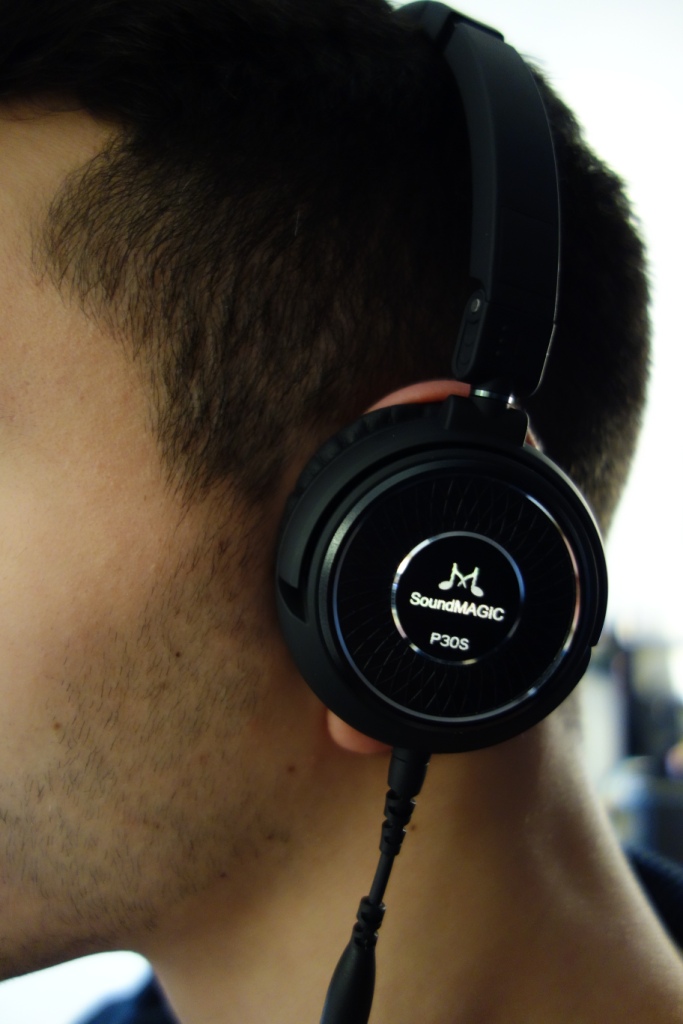 When I reviewed the P21S I was completely blown away from its price to performance ratio – with the P30S however, I was less impressed, albeit still finding these headphones doing very well for their respective market. I felt that the P30S was a little more focused on the low-end and therefore sacrificed a little of its mids and highs because of this. I would have liked a more controlled and better extended (in both the lows and highs) version of the P21S. That would have been, to me, an ideal step up in price.
Due to its £70 price tag, I feel that it should be doing a little better, whereas the P21S can almost be forgiven for having rolled off/not exciting highs. Furthermore, I felt that the unique open-sounding soundstage I found on the P21S wasn’t really present on the P30Ss, which sounded a bit more closed and condensed – something that really didn’t help its lack of high frequency sparkle.

Lows:
The low-end was definitely the strongest point of the headphones, where they had a quite prominent and overshadowing mid-bass response. The sub-bass, like the P21S was present, but didn’t really extend all that much. It was really nice to see sub-bass present, as most on-ear headphone and even over-the-ear headphones have non-existent sub-bass.
The mid-bass of the P30S was good, but just like the P20S I felt lacked a bit of control and was a little bloated – in this respect the P30S had a greater emphasis in its mid-bass slam, thereby making the mids a little less enjoyable.
Overall, I felt the P30S had an emphasis on the mid-bass, and here I feel it could have been toned down a little. Despite being an ex-basshead and someone that still thoroughly enjoys a pounding mid-bass response, I would have preferred something a little less bass heavy.

Mids/highs:
The mids were unfortunately overshadowed by the mid-bass of the headphones. I felt that if the mid-bass was slightly toned down, then it would have given a better experience in the mid frequency range. The mids were therefore slightly dipped and thereby making the headphones sound a little V-Shaped.
The highs were almost identical to the P21S, however due to the soundstage being a little more closed-sounding, it meant that the highs were less spacious and sounded more confined. The highs therefore didn’t really have much of a sparkle and were rolled off a little. 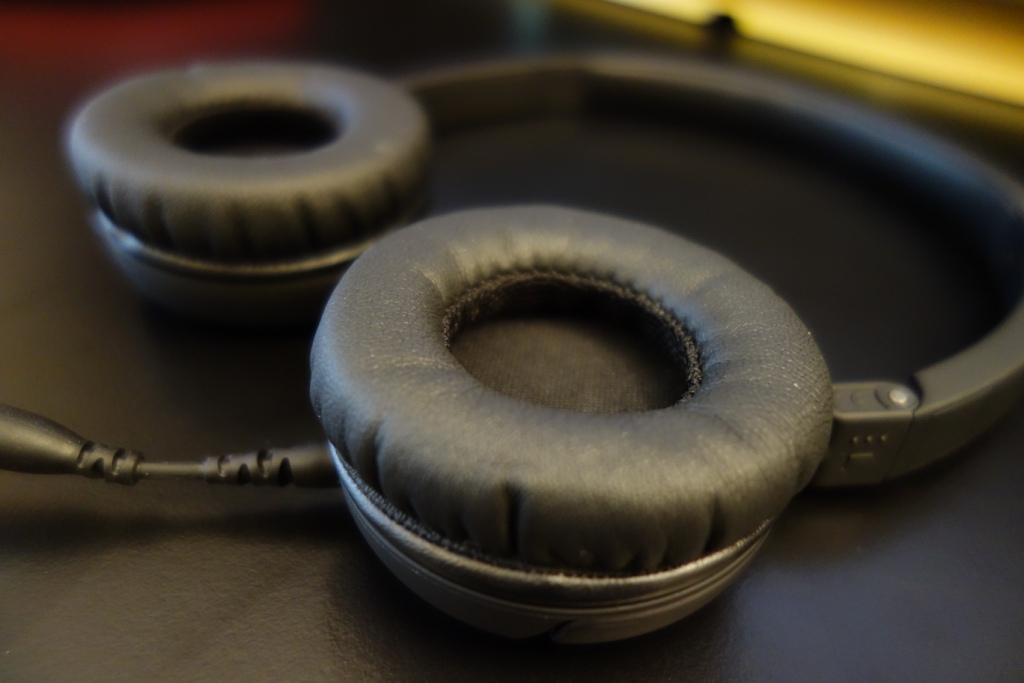 Overall the P30S is a great sounding headphone, despite this review coming somewhat negative in parts, it’s because I’m reviewing it at their listed £70 and heavily comparing to the P21S that I had previously reviewed. At £70 I wanted just a little more than what was being offered. If the headphones were £50 – then I would have seen it as being a slightly different sound signature over the P21S, but in this respect, these have a less open/lush sound and are £20 more expensive over their younger brothers the P21S.
In conclusion, I would put my money on the P21S, rather than the P30S, for both its lightweight design and overall sound quality.
Don’t get me wrong the P30S are still a great buy, but not as good as what the SoundMGAIC P21S offers. 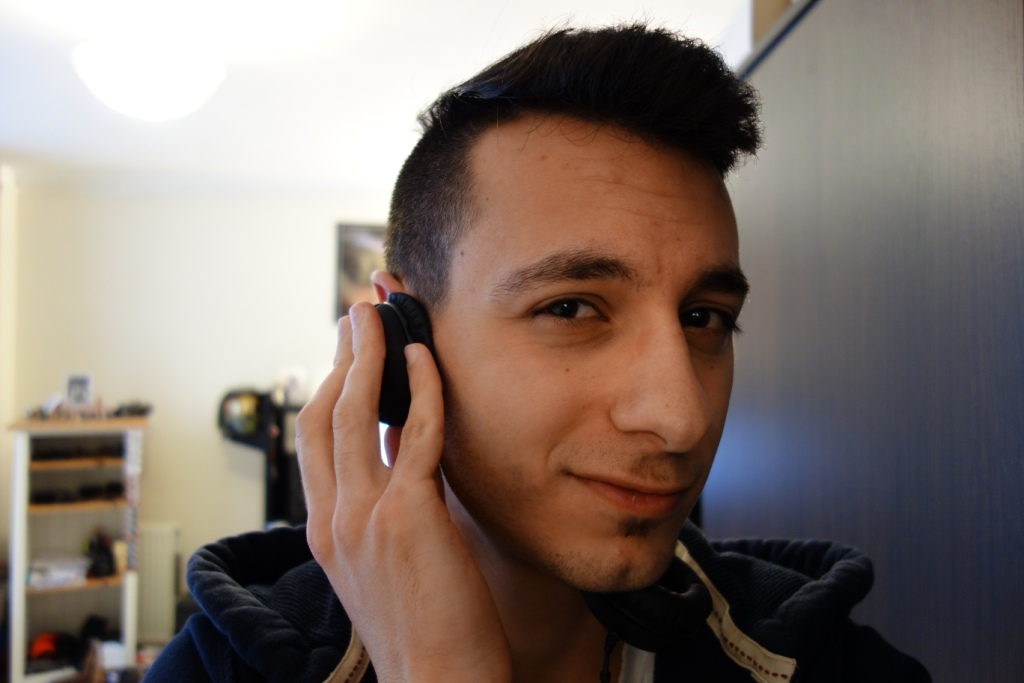 I should also mention that these headphones can also be worn by DJs as due to their good design, it allows you to easily have one ear covered whilst the other is sitting around your neck or top of your head!