First of all I would like to thank Sergey for sending me these out to review.
You can find out more information about the Consonance V2 and purchase it on Fischer’s website. These can be found on AmazonUSA. 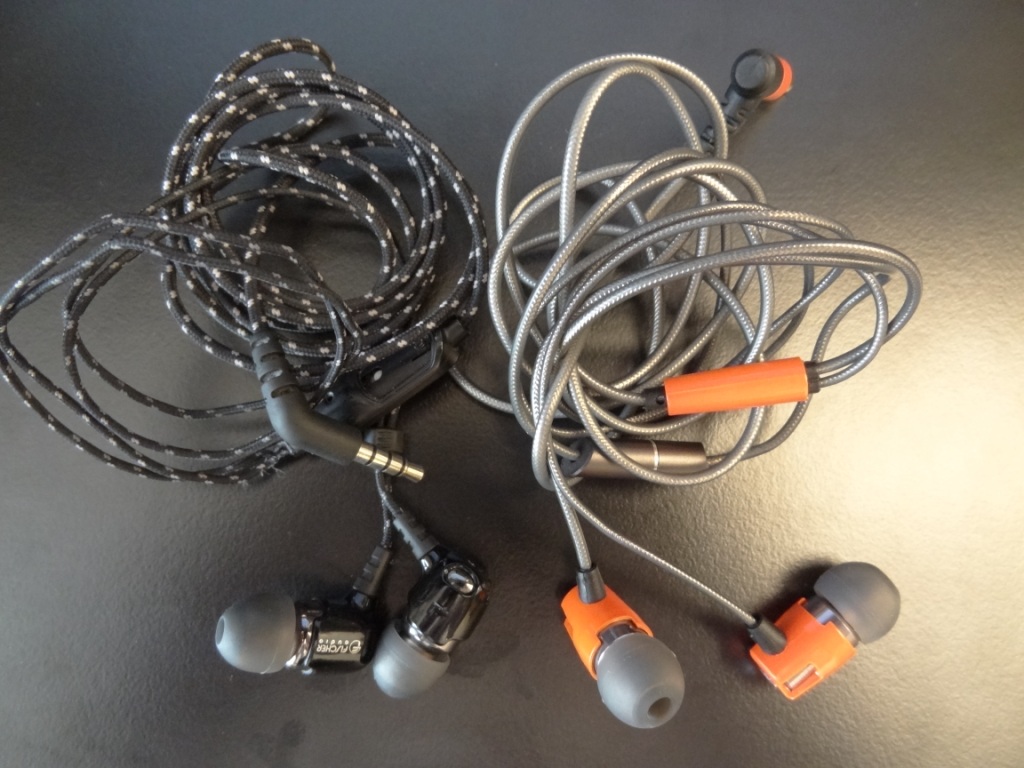 I had previously reviewed the original FA Consonance, and when I saw the V2 announced I was very much intrigued to see how it sounded and performed. The biggest flaw of the original Consonance was its wire quality – which meant that there was an issue with longevity. With that said, I really do love the Consonance and thus why they made the IEM awards 2013. At their price range, the FA Consonance is and still is to my ears the best buy in its price category. I should note that I’ve used the original Consonance almost every other day playing football in the park, and they’ve still held up to quite a lot of abuse.

Packaging:
The packaging that is provided with the FA Consonance V2 is updated and for the better. It looks like a better product from the outside now and something that you could see on the shelves of high-street stores. 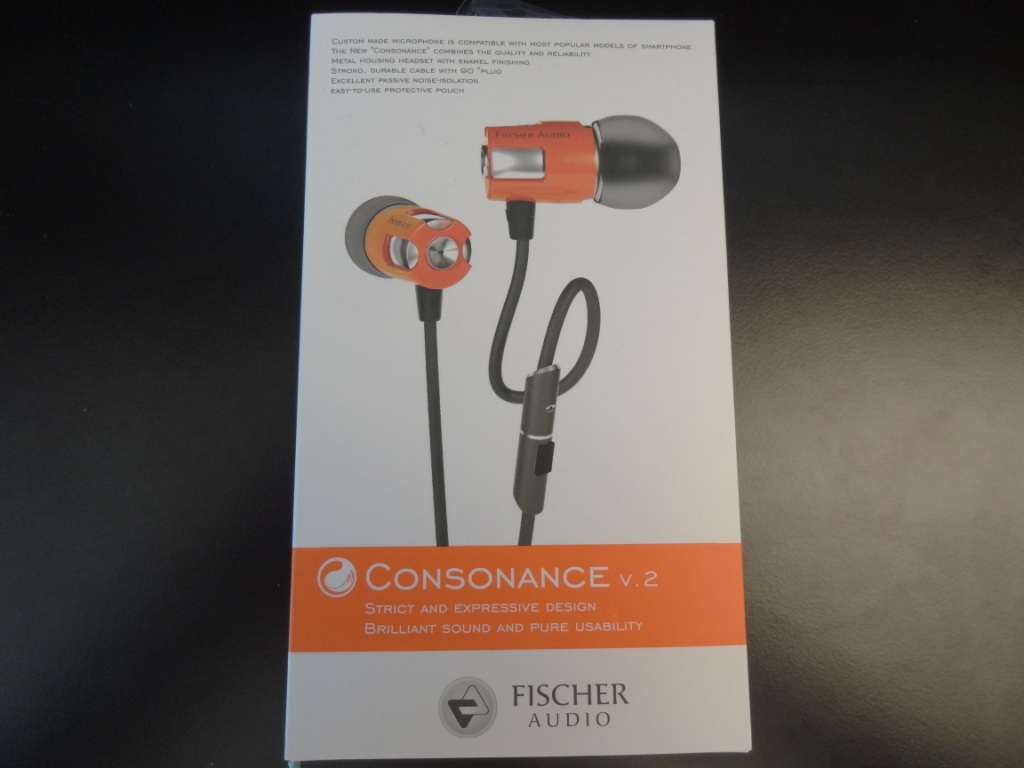 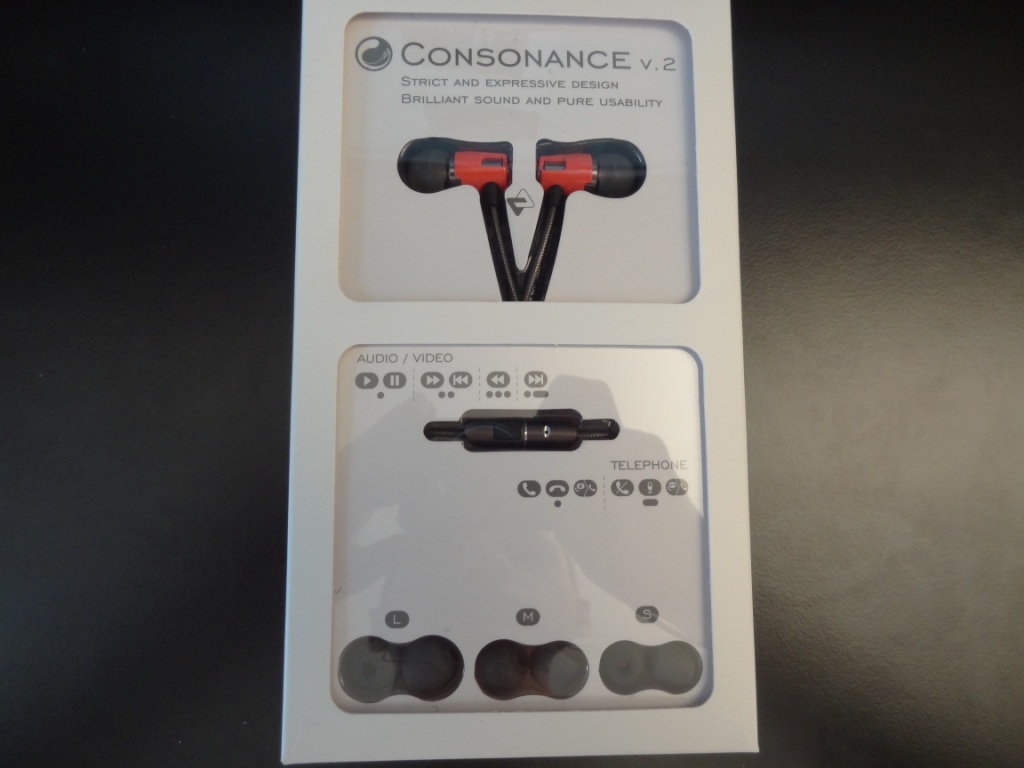 Accessories:
The contents of the package are decent, although not perfect. In the package you get the following:
-Earphones
-S, 2x M, L silicone tips
-3.5mm conductor adapter for older devices
-Soft carrying pouch 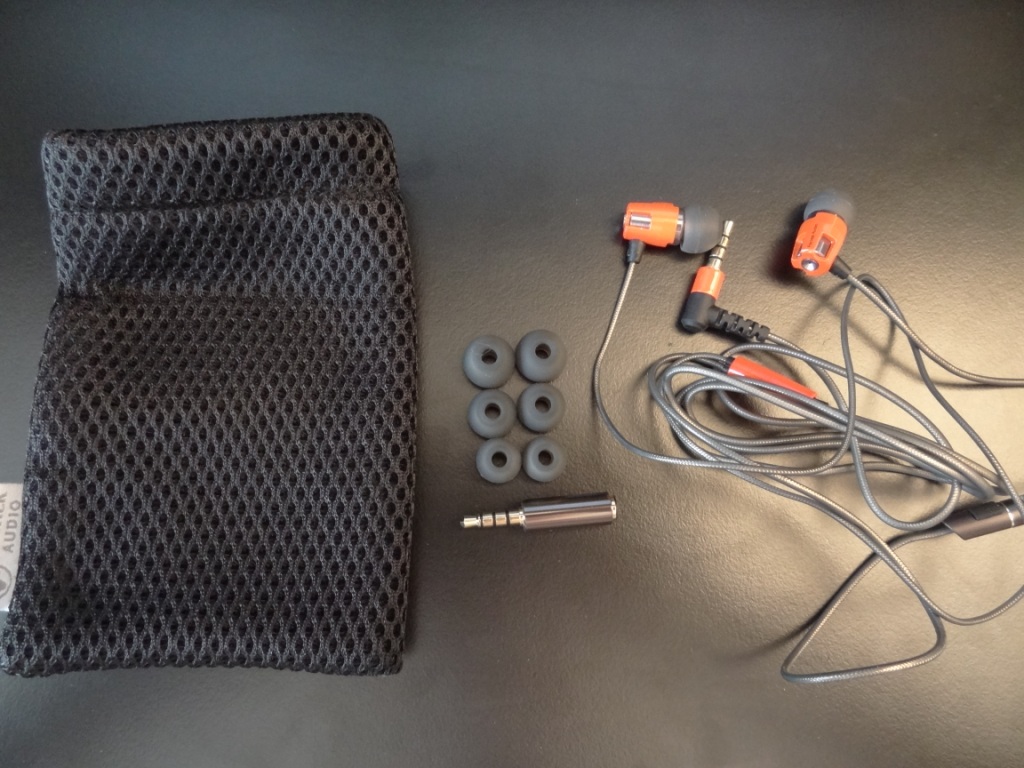 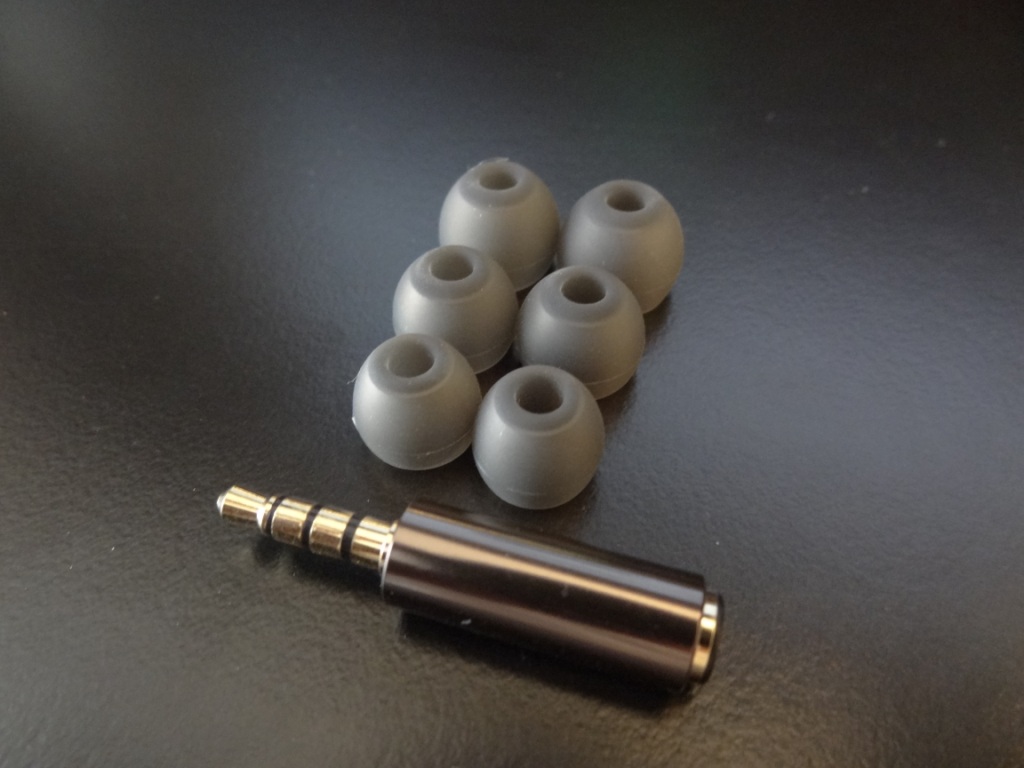 As you can see the accessories aren’t amazing, but I love the fact that Fischer Audio thought about the backward compatibility of these in-line mic enabled earphones with older devices.
This comes from the jack on newer devices being different from older devices. Essentially it means when you plug in these 4-conductor earphones in an old device or not-made for mic source, the sound will be at 50% and distorted. 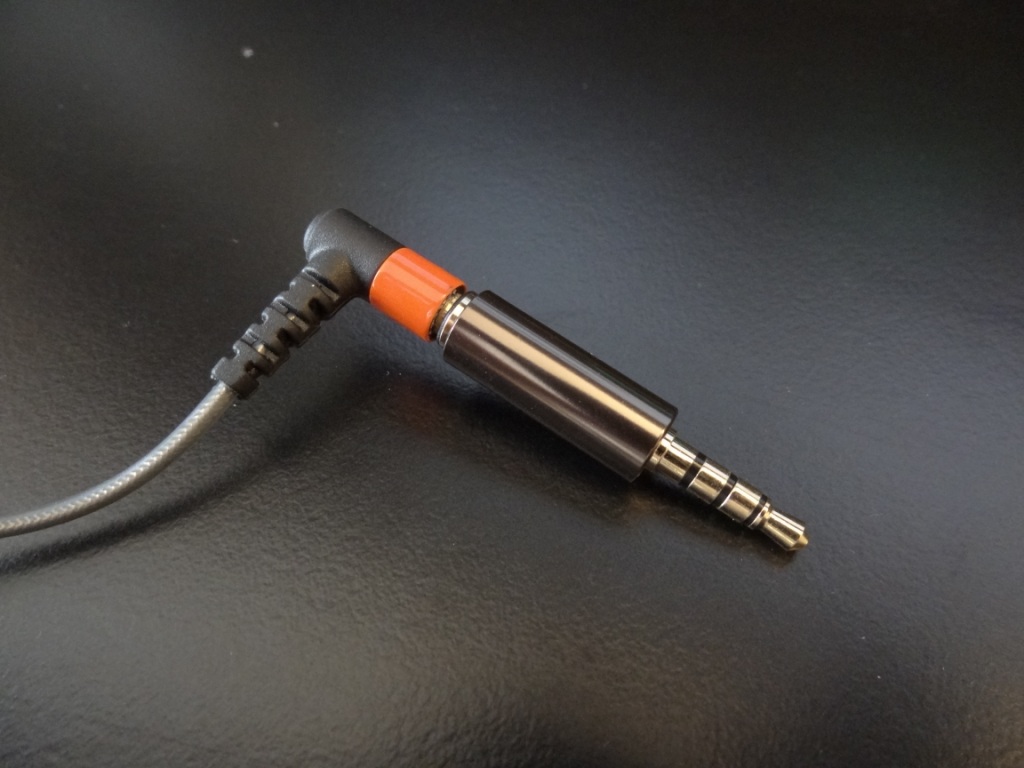 To put into perspective: When I plug the Consonance V2 in a Samsung Galaxy S1, the sound isn’t full until I hold down the mic button and thus get the full range from the S1 – this is where the adapter comes in and helps with you not having you needing to press down the mic button at all times. With the Galaxy S3 on the other hand, I have no problems with the Consonance V2. As I said it is for older devices or have a different layout with their input 3.5mm jacks (like my Denon AVR-X500 AV receiver, which has the same problem as my Galaxy S1 with the Consonance V2).
So, top mark to Fischer Audio – I’ve not seen it on any full-size headphone let alone earphone; yet it is a fundamental aspect of any operations for any audio equipment.

I would have liked to see more tips included, especially some foam tips.

Overall first impressions:
Overall I was impressed by the initial package it comes in and furthermore the thought process of including the adapter with the earphones. Overall, a great initial impression. 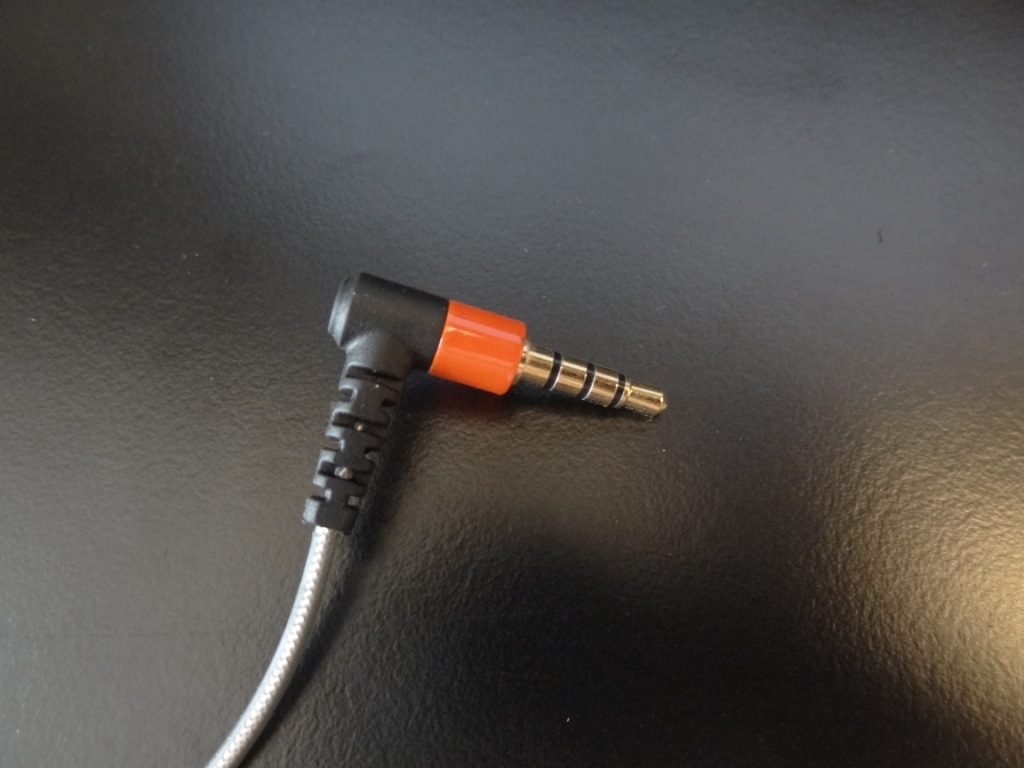 Starting fromt he jack, it is a right-angled 3.5mm gold plated jack. The jack itself also looks very good with the rest of the earphone (as the earphones can be found in 3 different colours: White, Black and Orange – my version being Orange) – the jack is thus coloured in Orange to fit the theme of the rest of the earphone. Then moving up the wire, we have well made and protected splitter – that yet again is also themed with the colour of the earphones.
As we move closer to the earphones themselves, on the right hand side, we have a microphone and a single button remote. The button controls play/pause and for Android when held down launches Google Voice. The mic works brilliantly and sounds good on the receiving end. 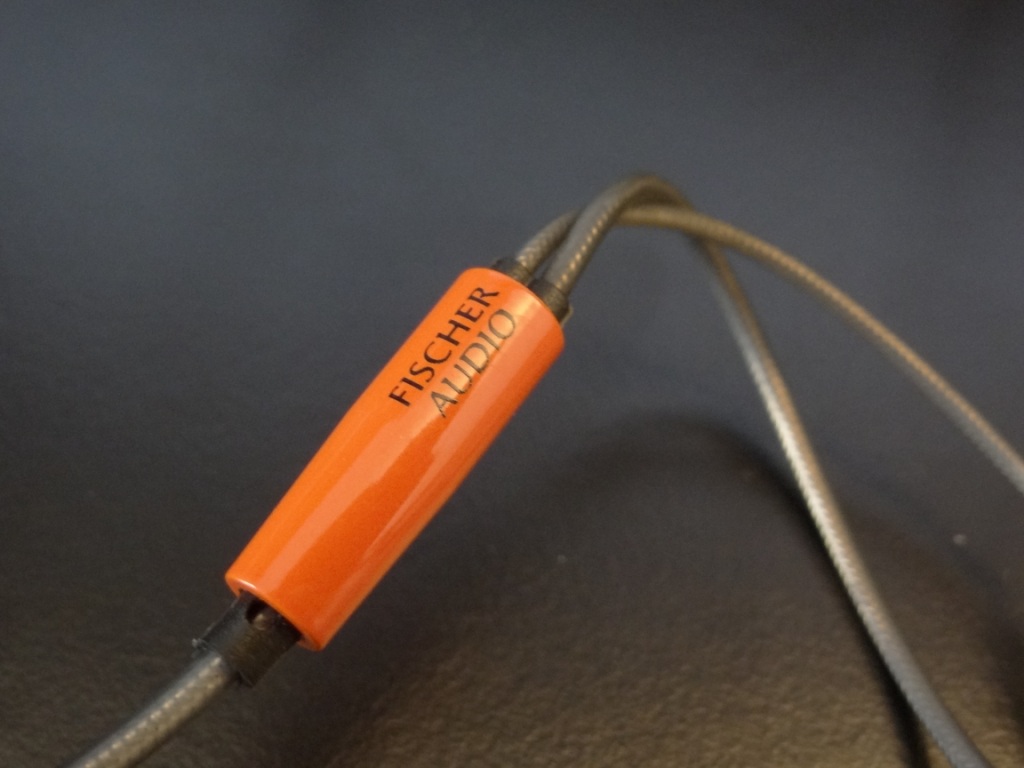 Now as mentioned earlier the wire is what was of concern to me and in the V2 model, I really love the wire that’s been provided. The wire itself feels durable and more so doesn’t get tangled, which is a problem that I found with the older version of the Consonance. The wire also has little microphonics, despite it still being present it is much better than it was before. When worn over the ear, just like the older version, the microphonics are completely eliminated. I can’t quite stress how much of an improvement the wire is for the earphones. It really makes a lot of difference for day-to-day usage. 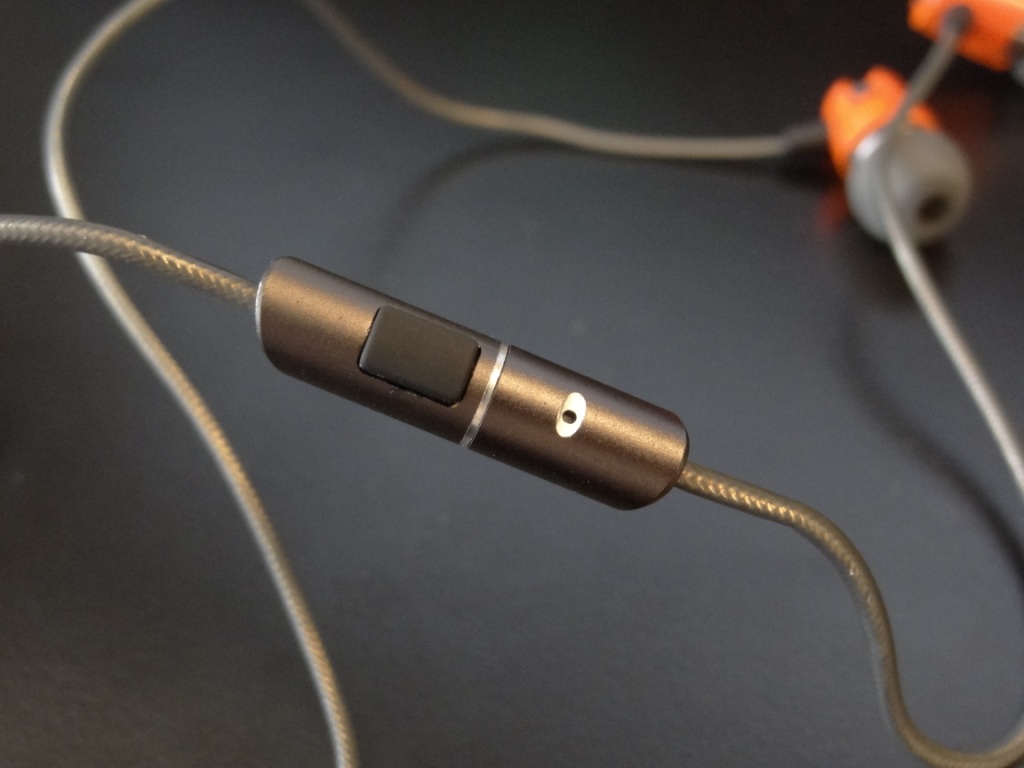 The earphones themselves are also very well made, with a solid strain relief that allows the wire entering the earphones to be well protected. The earphones themselves have a metal enclosure with a plastic frame on the outside. This means that the earphones are very tough, however that does come at a price; the earphones are heavier than their old brothers. This isn’t something that is too concerning as it isn’t heavy enough to fall out of your ears, but it does mean that it isn’t as light in your ears, thus you do feel it in your ears and unlike the older Consonance isn’t as comfortable to wear with the wire straight down. You can’t have everything I guess so there must be some give and take. 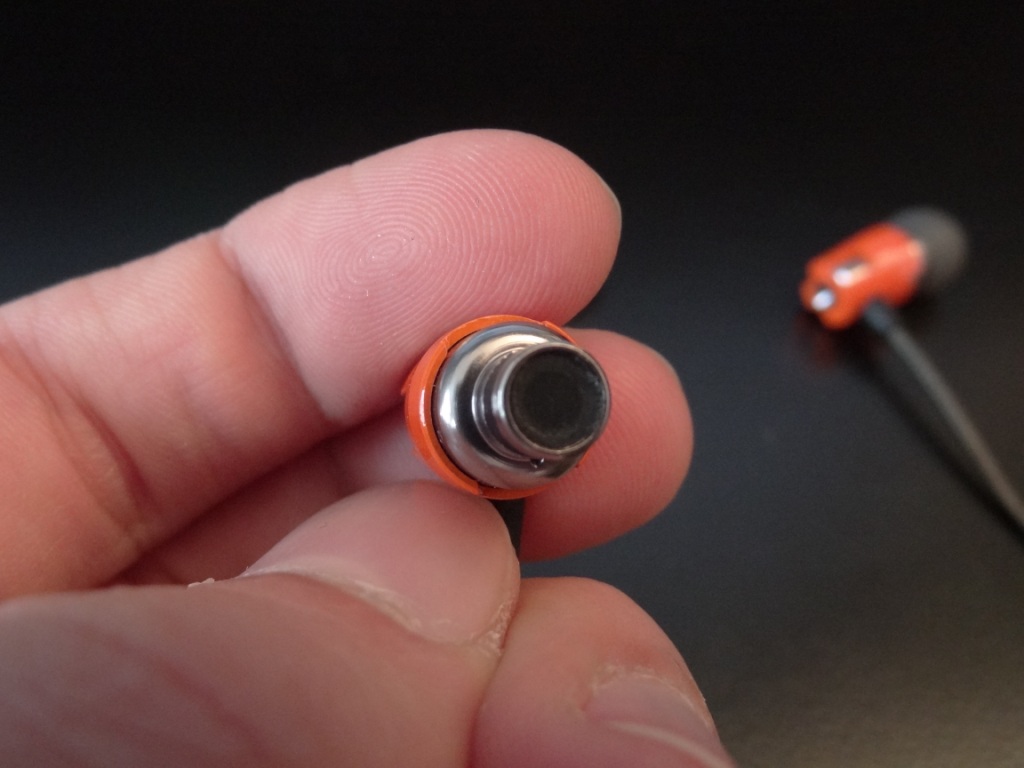 Finally, one thing I noted about the build quality is the left and right indicators on the earphones are a little hard to see. They are written on the black strain relief, in black. This means in the dark it is almost impossible to see – your best indication of which is left and right is to see where the microphone is (right side). it is something that can be ignored due to the microphone, but I would have liked a better indication of the left and right side, either by a right and left indicator written on the earphones themselves or the current writing in orange (or the selected theme colour).

Overall the build quality is a huge improvement on the old version – I really like what Fischer Audio have done and give them top marks. It isn’t quite perfect but it is almost there.

Look:
The looks to me is a huge improvement as well – the looks are very nice and can be seen as fashionable, especially with its striking orange colour.
As said in the build quality section it is nice to see the theme colour throughout the earphone – from top to bottom you can see the orange theme and it’s nice to see. I also should state that the wire really does look cool and gives it a high-end earphone look, that can be found on certain earphones. 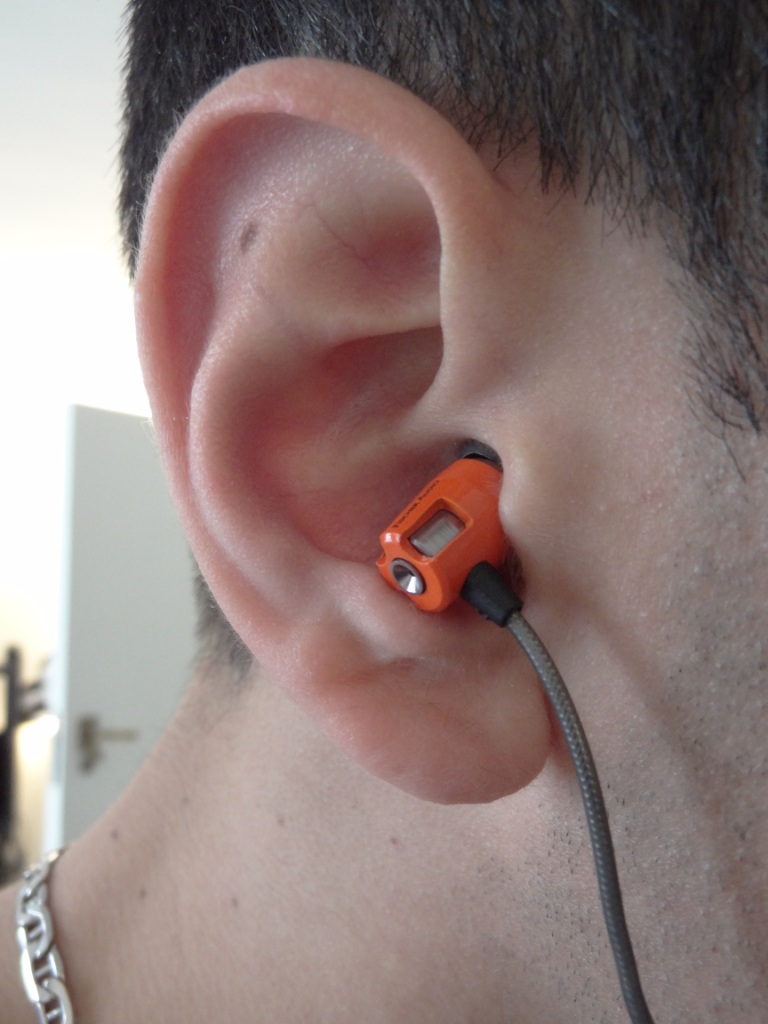 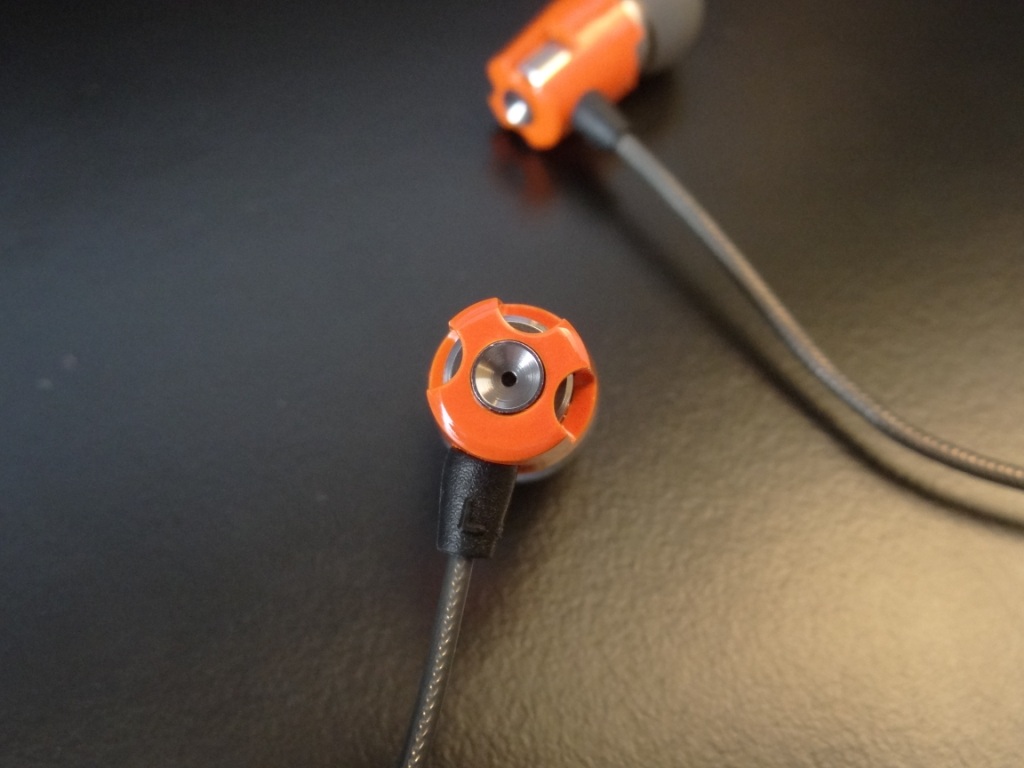 Finally the comfort:
The earphones are quite comfortable, but as noted before they are heavier than the old consonance and thus means that they aren’t as comfortable as the older version of the Consonance. I do find that the comfort levels are absolutely fine, but they could be better if the earphones were lighter. In other words they are above average and actually quite pleasant to wear for long periods of time, but sometimes when I’m playing football with them on, I find them slipping out of my ear due to their weight, whereas with the older consonance that wouldn’t ever happen. 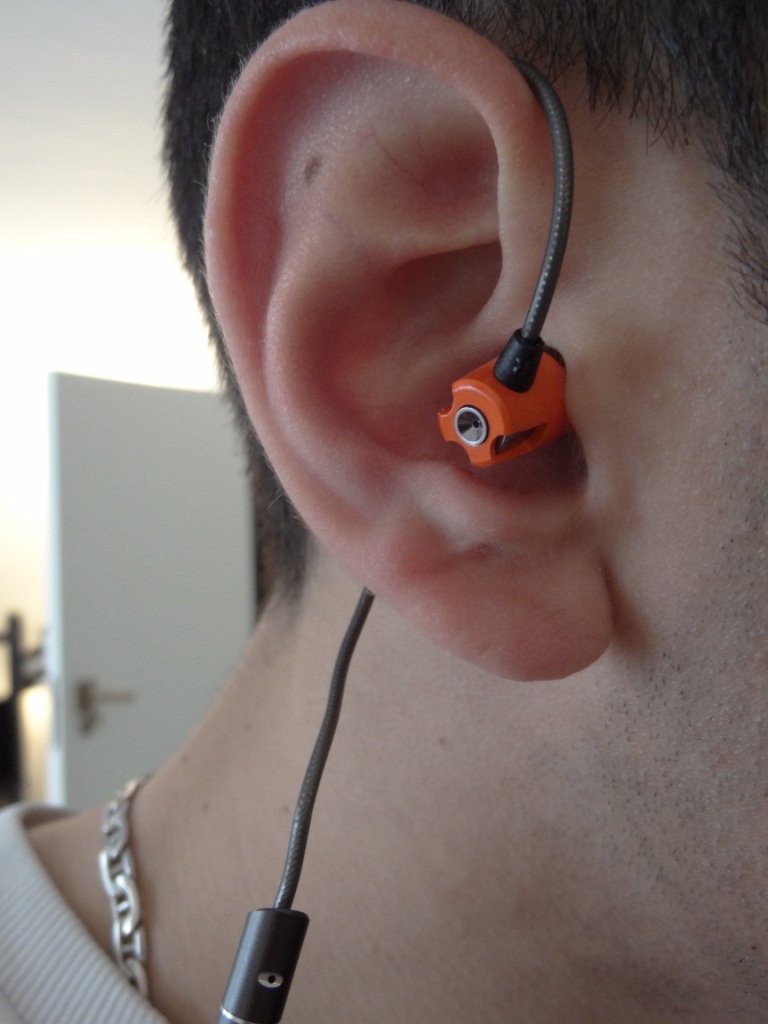 The sound quality is something I was worried about, as with the new construction of the housing and the new revision, I thought the sound would be greatly effected, which would make me not like them as much as the older version. There is a difference in the sound quality of the new revision and the older one, and unfortunately I have to say I prefer the older version quite a bit more, mainly due to its mids and highs being just that little more prominent. What I found about the V2 was that it sounded a little muffled and “restricted” – I had to also increase the volume more than I did on the older volume, which could suggest there is a more demanding driver inside now. 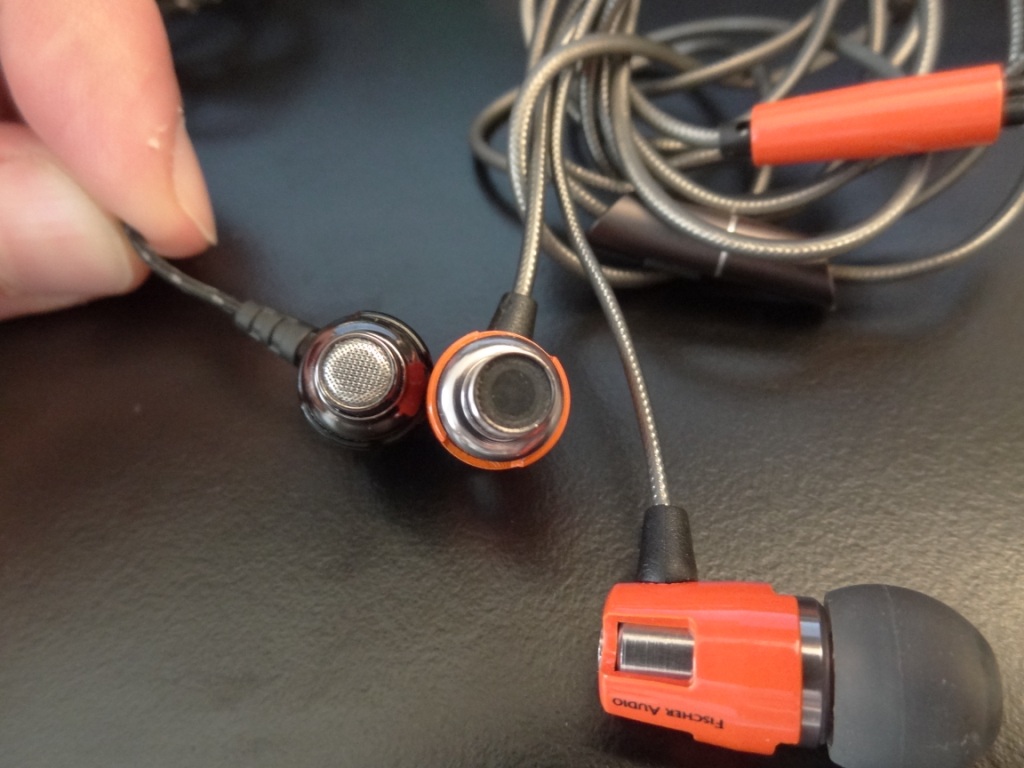 Lows:
The lows are very similar to the first version of the Consonance, but this time I felt that there was that little bit more emphasis on the mid-bass than there was before. The sub-bass is identical, where it doesn’t quite extend fully but does an amazing job, especially when pushed and EQ’ed. Thus I feel the mid-bass has become louder, and I’m not sure if that’s the best of things, as the older version had the amount and level just perfect for its price range.

Mids/highs:
The mids and highs have both decreased in quality in my honest opinion. I feel that the mids have become even more recessed than they were before and thus made the earphones sound more V shaped than they did before. The highs are still very good, but feel as if they roll off just that little bit earlier than before. It isn’t that noticeable at first, but after A/Bing them against each other, I could definitely hear a difference.

Soundstage:
The soundstage on the other hand has improved and I think that’s linked to the metal construction of the earphones. The V2 model has better decay and positioning to it. 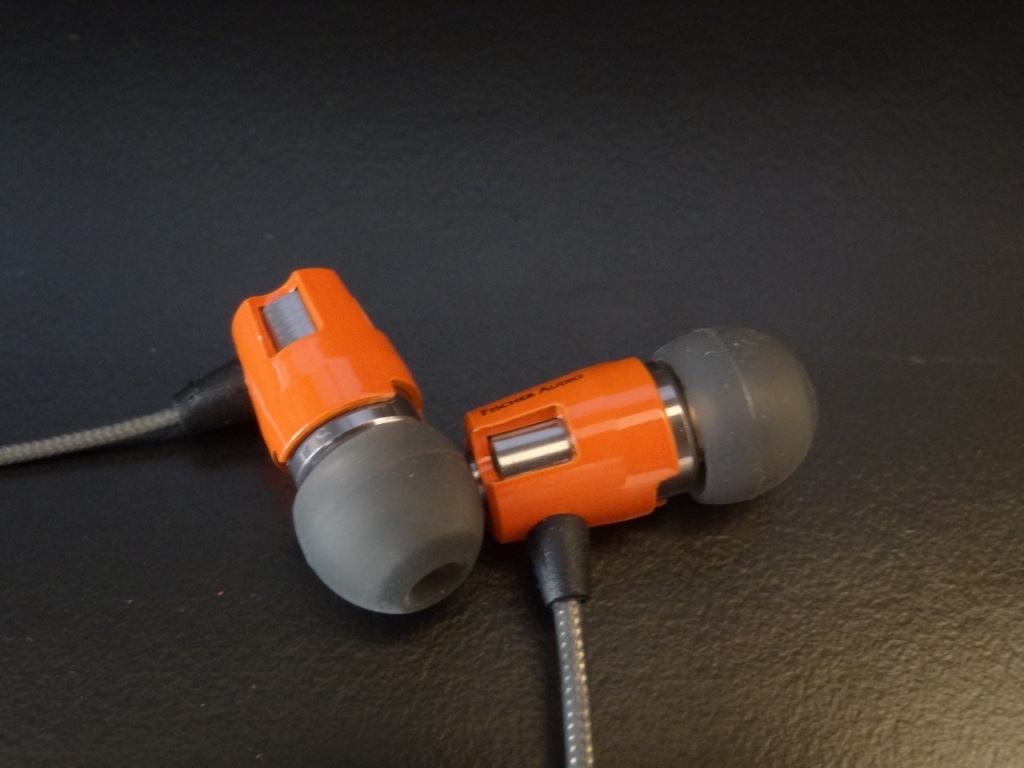 Overall, I’m yet again impressed by Fischer Audio and especially the FA Consonance, I really like what they’ve done with this model, however I was a little disappointed to find slight audio differences and unfortunately negatively effected my experiences. Despite the original model having wire annoyances, they were easy to get over. The audio on the other hand from the V2 is hard to get over as that can’t be “fixed” or “helped” – it’s what you get and you cannot changed that, even with an EQ. I thus feel that Fischer Audio did a good job improving the other aspects of the earphones, but also changed the quite-incredible sound that the previous model had. I wish they had not changed the sound characteristics and just improved the overall build quality.
With that said, when the V1 gets discontinued, the V2 will still be one of my top recommendations. They’re excellent earphones and I really do like them, just not as much sonically as the V1.