Before getting into this review, I want to say thanks to James from KeyPop.net for sending me out the keycaps to review!

I made a video review about the keycaps I received, so do check out the video out too: 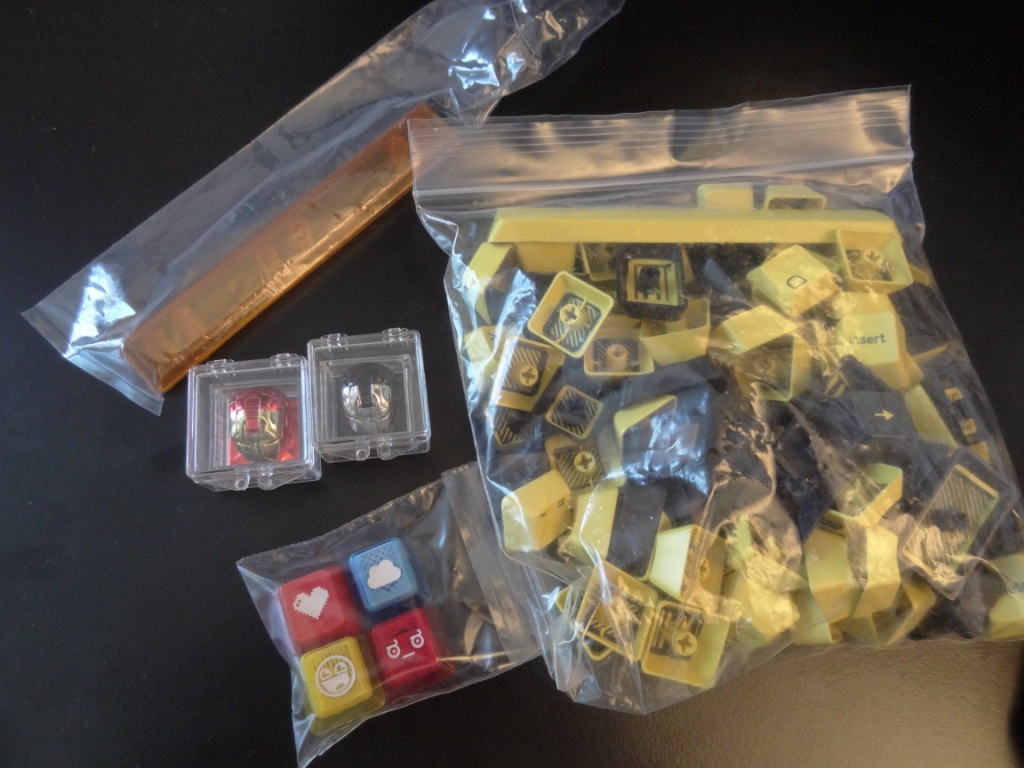 I would like to break down the review in 3 sections:
-Bumblebee set
-Iron man & War Machine
-Translucent range & 8bit heart

Starting off with the Bumblebee set
I was very much impressed by the set in its entirety – they’re extremely well made and the weight of the keys feels really nice. The touch is a little rough in comparison to the stock Logitech G710+ keys, but that’s something that I actually like, as it means that you don’t really slip as much when typing at pace. 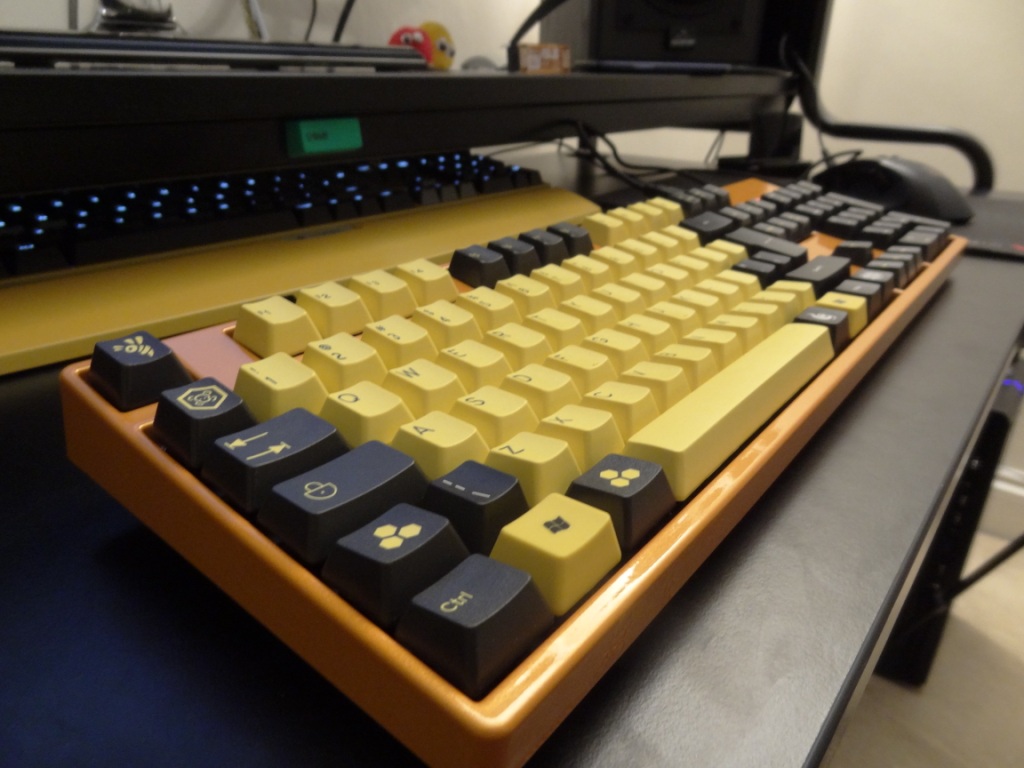 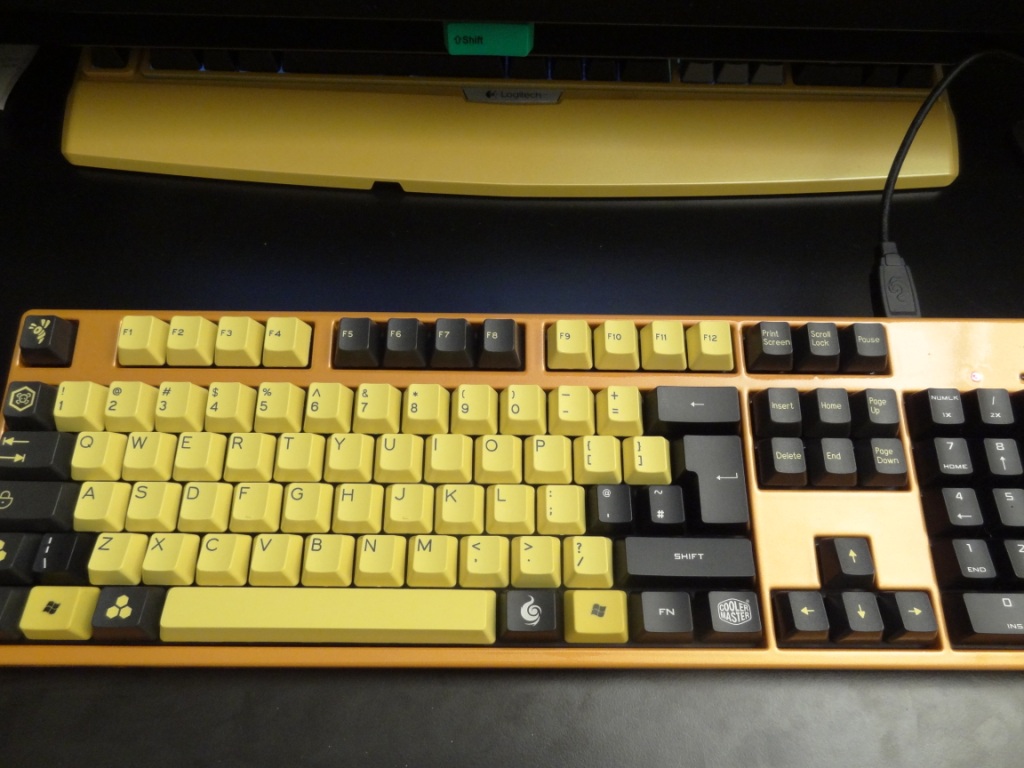 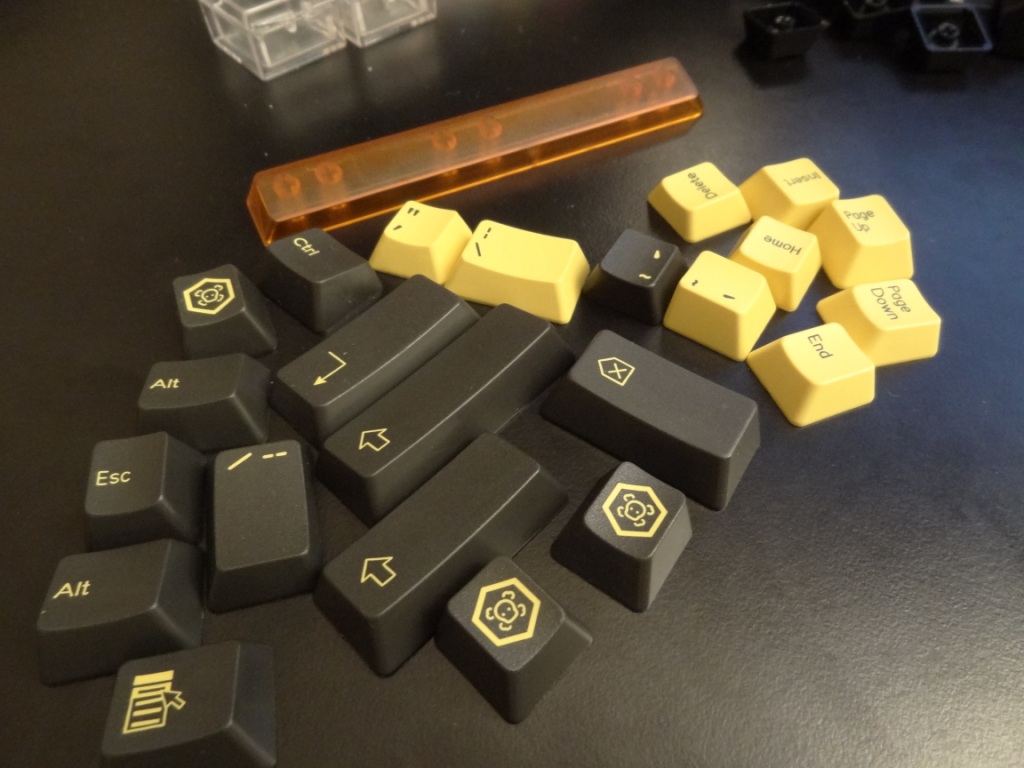 One thing I should mention about this rather expensive keyboard set, is that it doesn’t come with the number pad kit, which I can understand, with people having TKL (Ten Key Less) keyboards, thus KeyPop not wanting buyers to pay extra for the number set is understandable, but the fact that this adds cost to an already expensive set of keys, begs the question. At the price of around $100 for a full set of the bumblebee kit, it can be argued that you could buy a whole entire brand new mechanical keyboard for the same price.
Thus, these keys are appealing to a niche market – it isn’t something that everyone needs, but is something that people with money would go out and purchase, due to them wanting quality and a certain look for their keyboards. 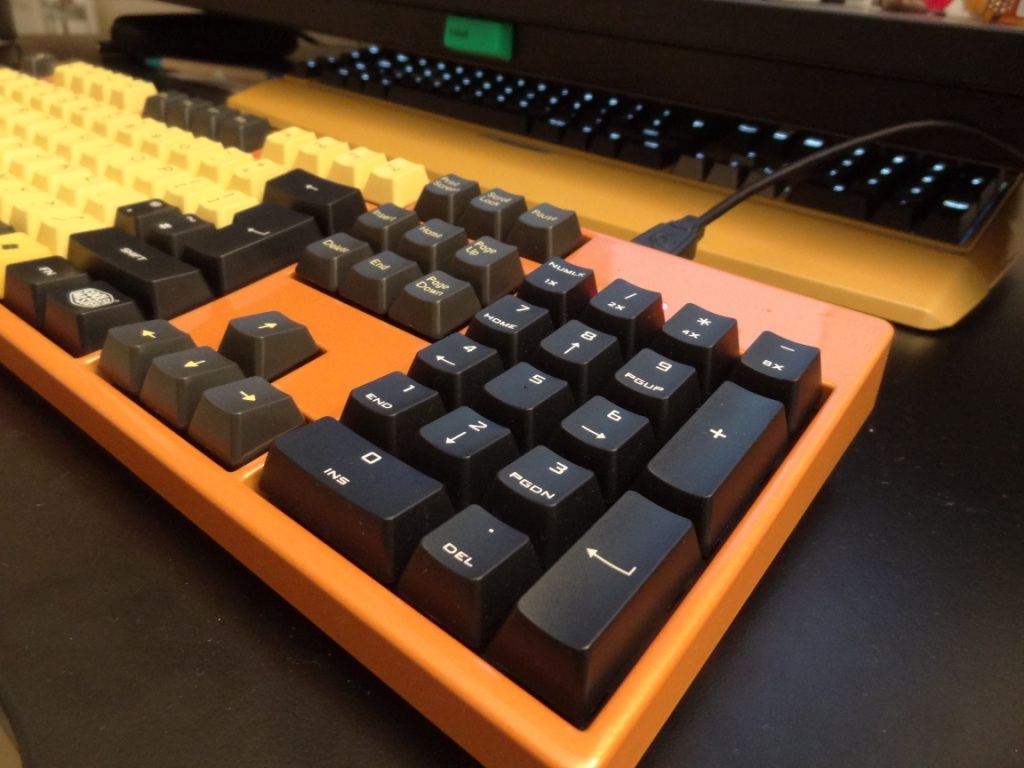 I thus can’t really complain about the price nor comment on it.
Overall, the keyboard set is really nice and I really like the touch that KeyPop have added to it, with the offset of the grey to the yellow. 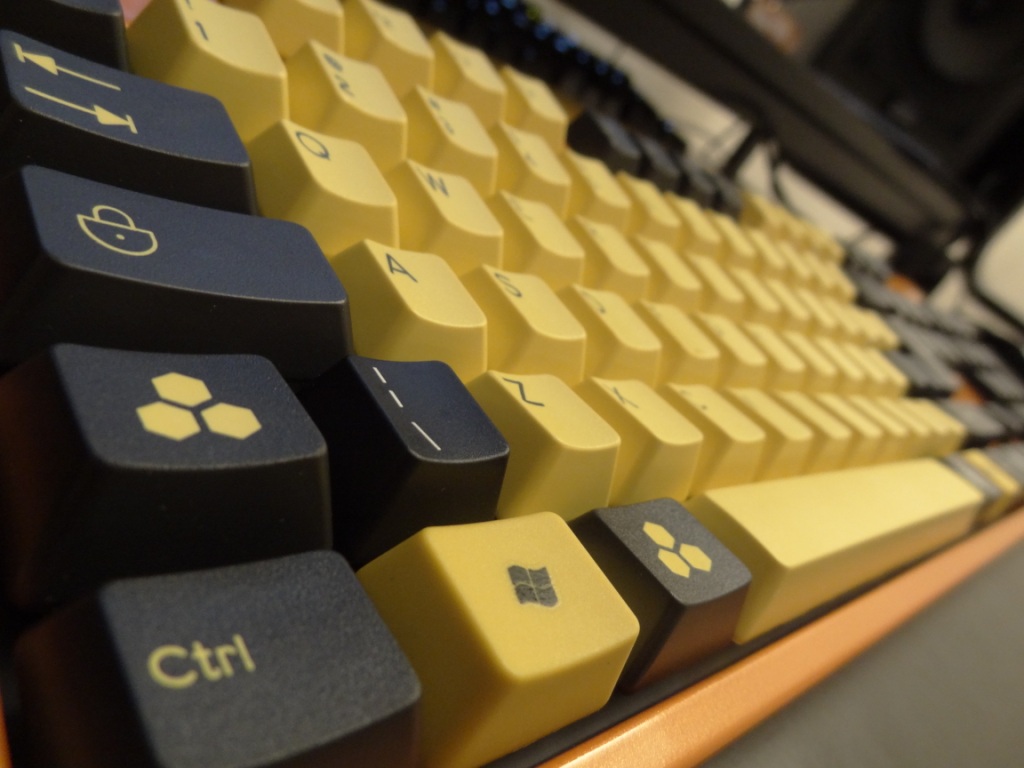 I should note that the Yellow is an off-yellow colour (you’ll be able to see from the picture above I got a windows button that’s a little darker in shade – which I prefer). It doesn’t really remind me of a bumblebee nor the car from transformers. It reminds me of a bright yellow colour that can be found on some fiat cars. It’s not quite the colour I was expecting, as the shade of yellow a bumble bee has is a little darker and has a tinge of orange within it.
Finally I should say that with a white back-light behind the keys, the keys don’t glow – thus the plastic keys are quite thick and reflect all light that shines under them.

Next the Iron Man and War Machine key caps
These two caps were truly unique and something that really were set aside from the others with their own little boxes protecting them. 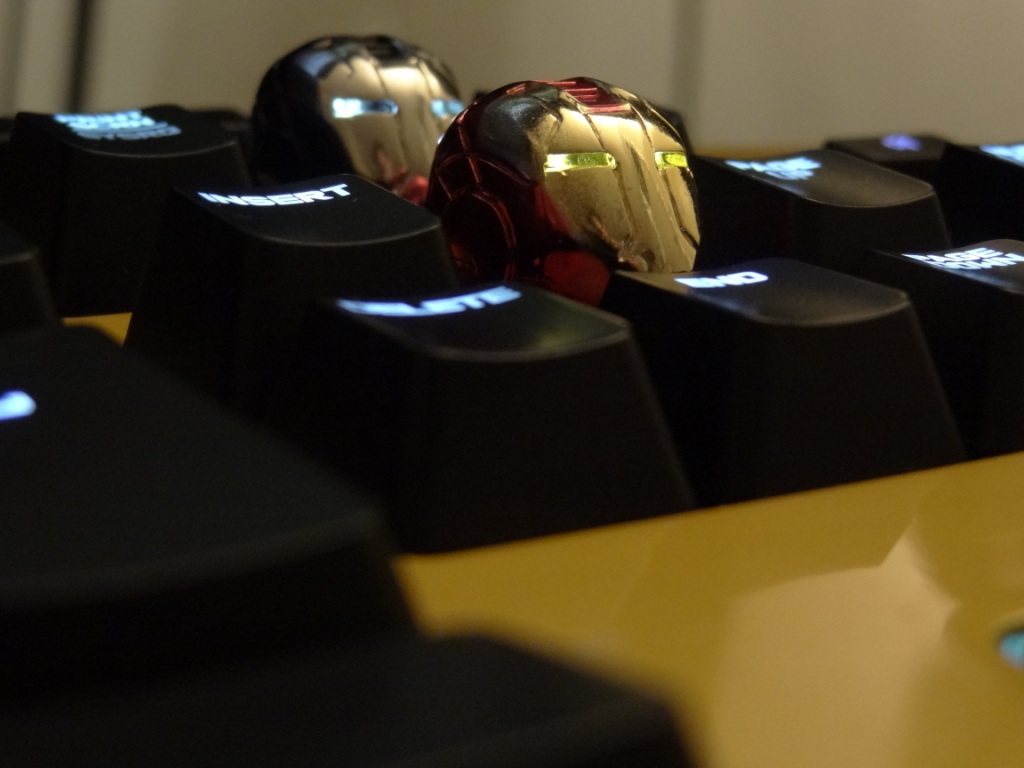 These keycaps are simply awesome. They are well weighted, as they’re made out of metal. It thus means it isn’t a key I would actively press a lot, as sometimes, due to its weight it can get dislodged from the switch – but as a touch on a mechanical keyboard, they’re beautiful.
What’s more exciting is that their eyes shine through too, via the LED back-lighting on my Logitech G710+ – I absolutely love that! 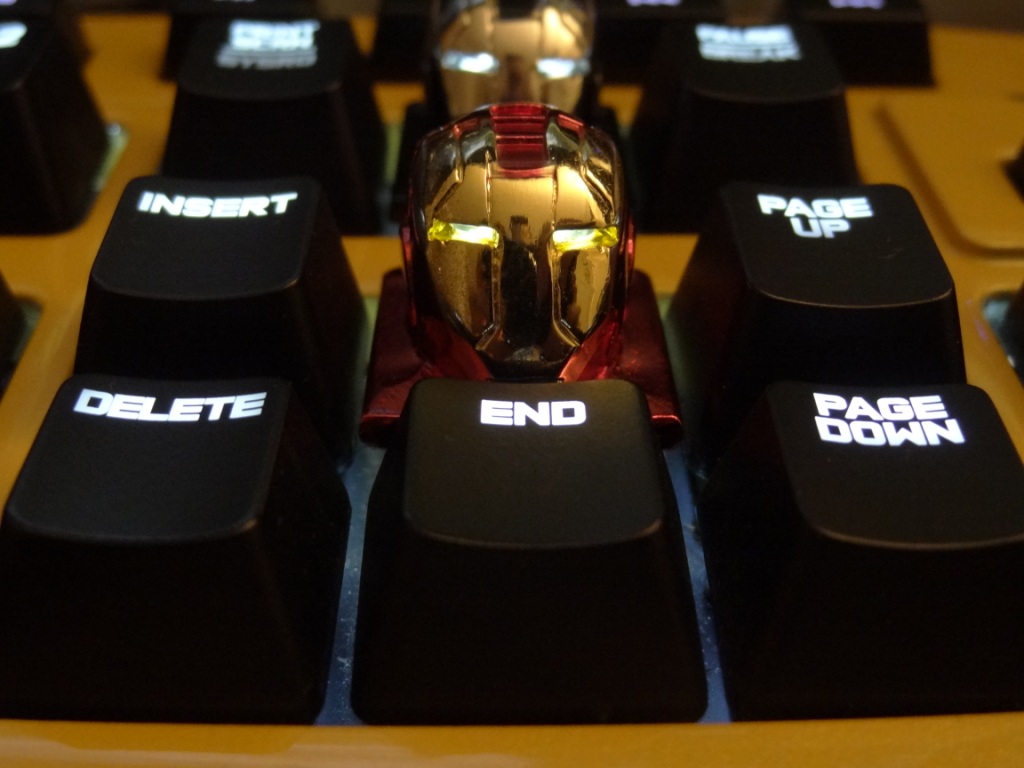 I should mention that the Gold Edition Iron Man has yellow eyes by default, with a white LED under it, due to the fact that within it it is coated in a gold colour. Thus the white LED shine off the gold and thus produces yellow eyes. 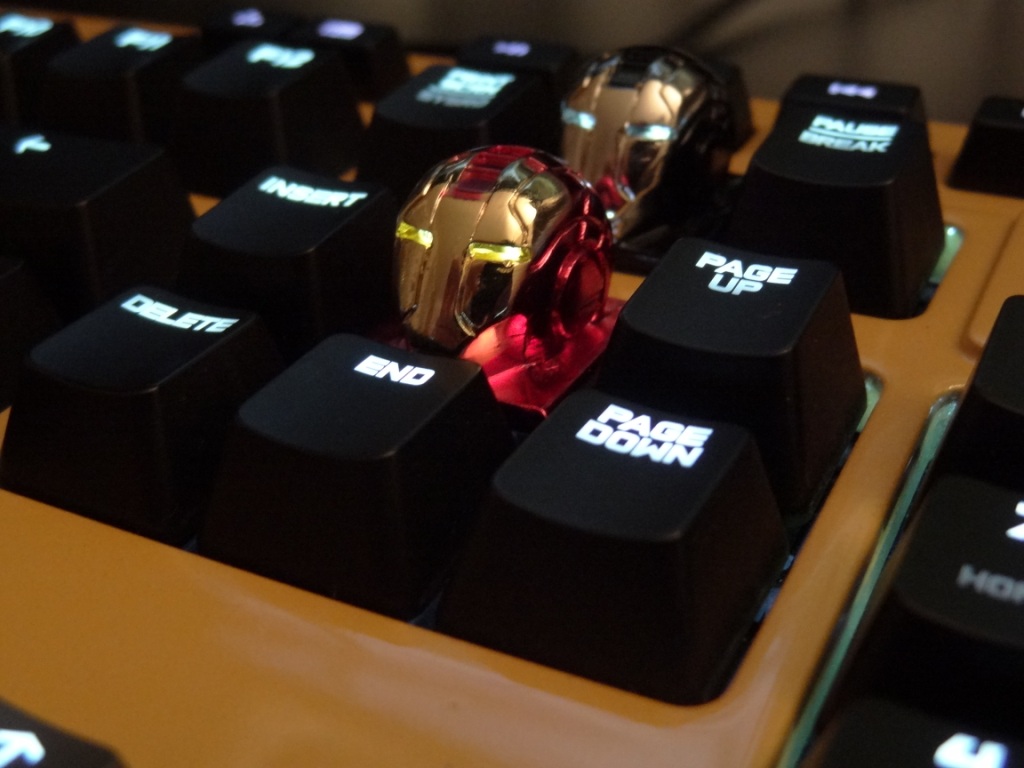 You can have quite a lot of fun with key covers, and changing the eye colour of Iron Man – by adding a blue key cover on your white LED, it causes the blue to mix with the yellow within the key cap and thus produce green!
Thus any key cover you put on, you have to bear in mind you have to mix it with yellow to see its end product. 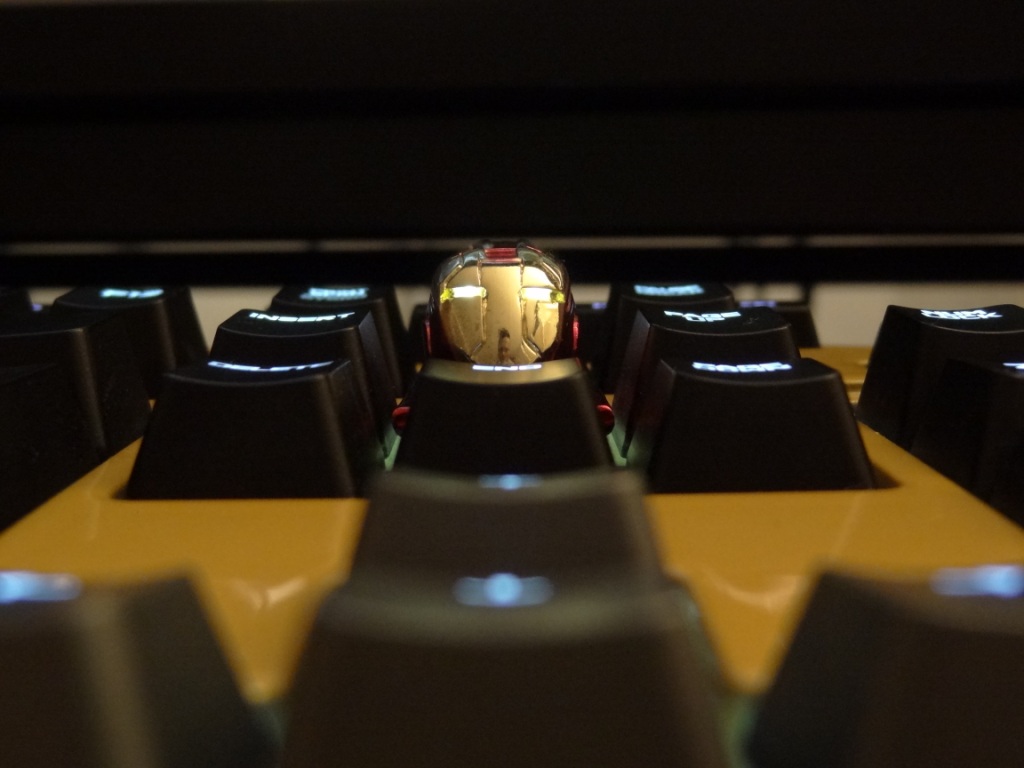 On a separate note I should mention the compatibility of these keys. Due to them having a square base – they might not fit on your keyboard – for example, on my G710+, they didn’t fit properly on the ESC switch. This was due to the keyboard having a frame around its keys. SO do bear that in mind before pulling the trigger and buying them.

Overall, the key caps are of excellent quality and I absolutely love both versions. They look and feel excellent!

Finally the Translucent range & 8bit heart
I really found these keys fun and they give me joy when I look at them. The translucent range are see-through key caps, thus when light shines under them they pretty much glow full of colour. Light does escape them however, thus with a bright white LED, you might see the bright white light when looking at them at certain angles. 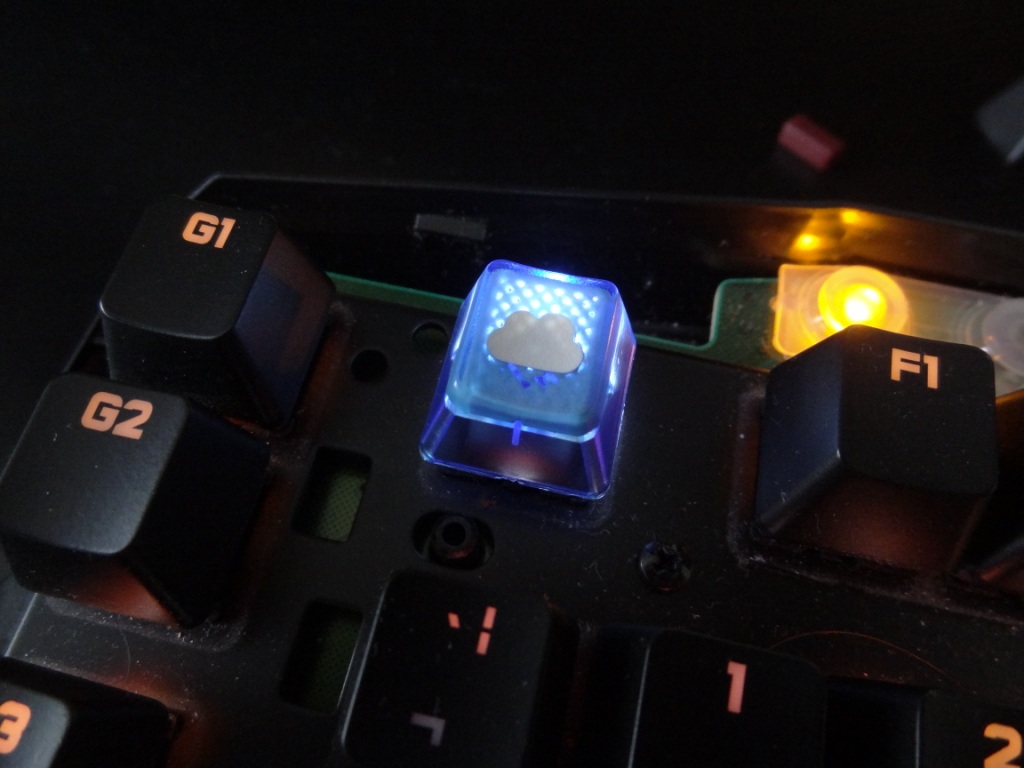 The 8bit heart keycap is like the bumblebee set, where it doesn’t shine light through it – it is again made of good quality and is slightly rougher than my G710+ keys. 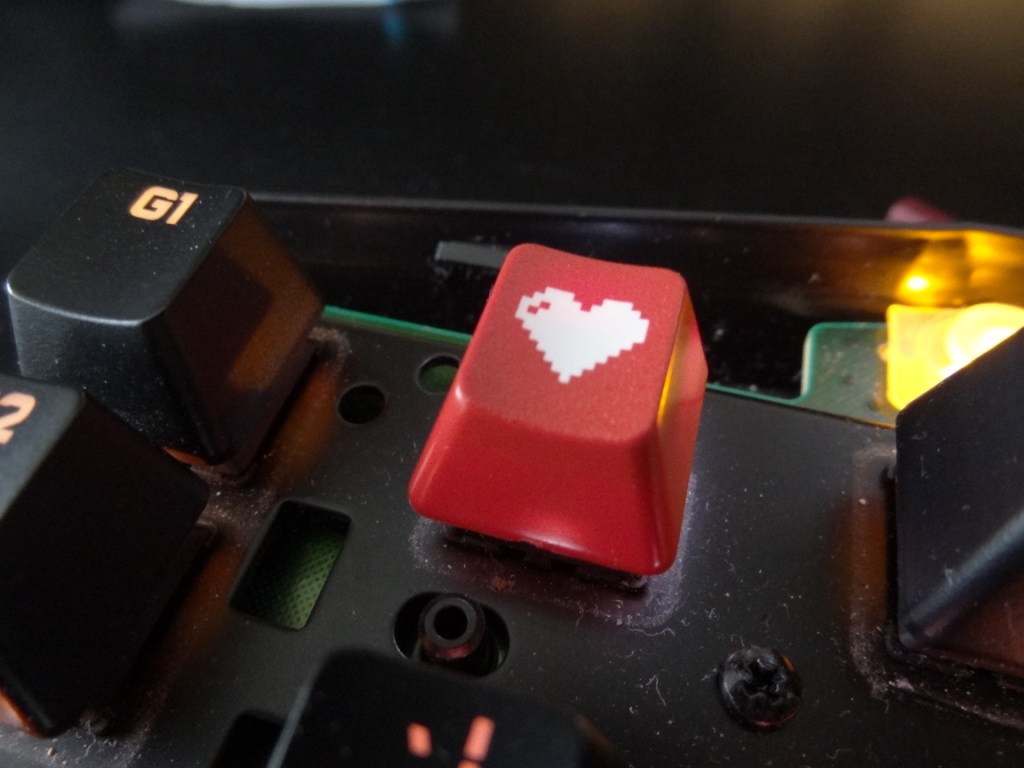 I use these keys on my QWER8 V2 MX Switch Testing Kit – they thus sit there looking pretty and I love looking at them sitting in front of me, just under my monitor. 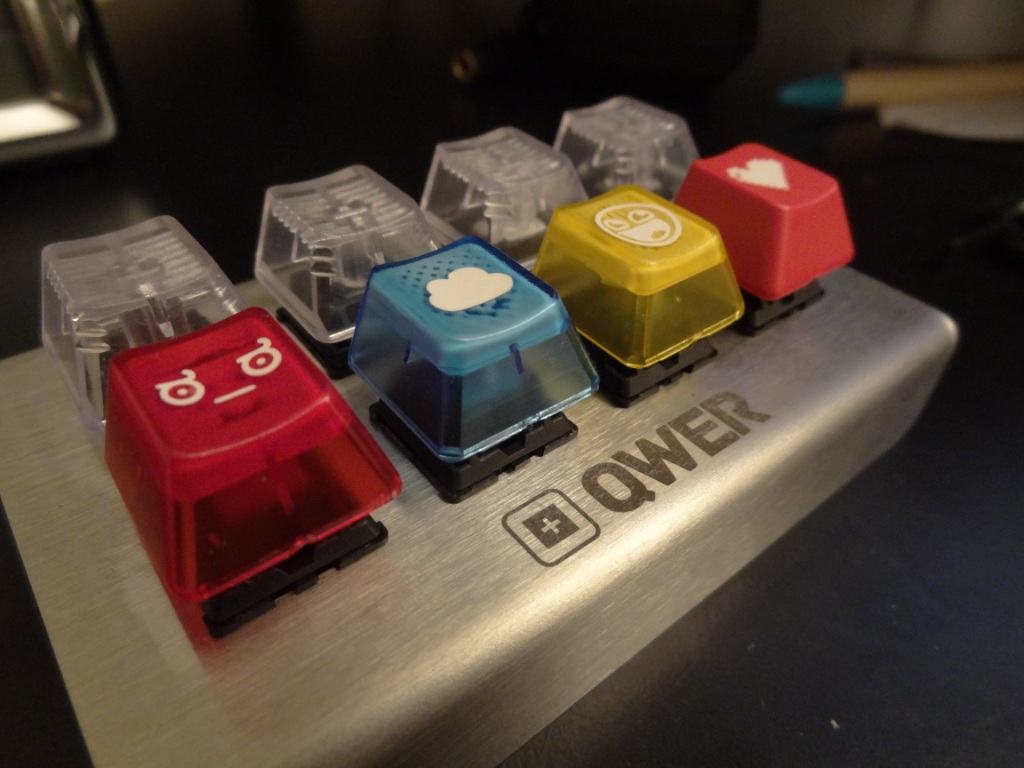 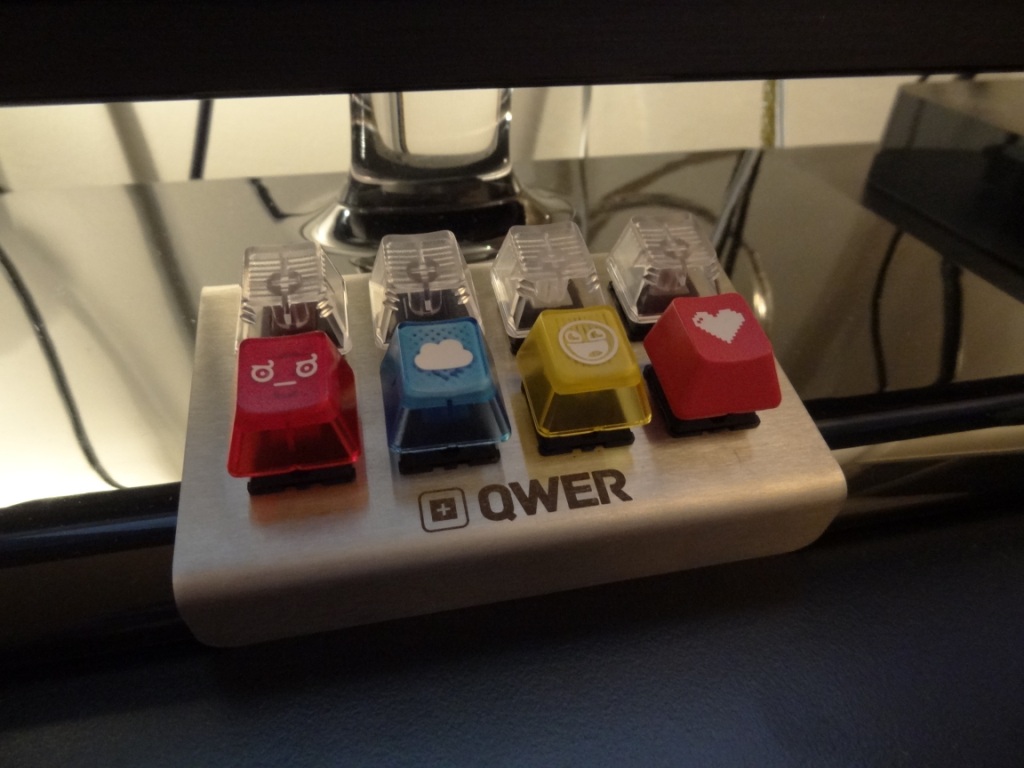 Overall thoughts and conclusion
I was impressed by the keycaps, they’re of good quality and really do reflect well on KeyPop. Despite them being slightly expensive, I still think they do appeal to a niche market to begin with, and that market is often willing to buy certain presumed “cheap to manufacture” plastic keys for quite a premium price.

Thus if you’re looking for good quality products that look and feel nice on touch, then look no further than KeyPop.net.

2 thoughts on “Review of KeyPop’s Keycaps for Mechanical Keyboards”