First of all I would like to thank Firestone-Audio for sending me the amp for review.

Written review:
As I live in the UK – the review will be based on the product costing £170.

Packaging & accessories:
The FireyeHD headphone amp is a beautiful piece of kit, that comes in a nice little package which is quite simplistic. The amp includes a USB cable to charge the amp, a 3.5mm to 3.5mm interconnect to connect it to your given source and a charging wall brick.
I should say, that despite me living in the UK, Firestone Audio sent me a EU plug – thus I wasn’t able to use the wall charger at all. I don’t know if they provide a UK wall charger, but I would presume they would do so. Other than that, the amp came with what I would have expected from an amplifier package. It would have been nice to have had a little carrying pouch included for the FireyeHD as it is designed to be a portable amp. 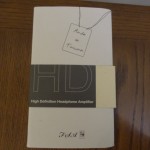 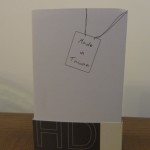 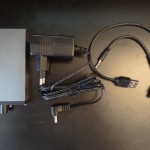 Design and looks:
The design of the amp is extremely sleek. It has a metallic finish that is solidly built and its markings and switches feel solid. It also has a little weight to it, which gives the product feel a premium feel to it. It’s size is similar to the Samsung Galaxy S 3 – but it thicker. It measures 10.5cm in length, 6cm in width and 1.5cm in thickness – thus is is portable enough to be put in someone’s pocket. I should note that the FireyeHD has a high/low gain switch, a bass on/off switch and a knob to adjust the volume at the front. At the back of the amp it has an on/off switch, a blue LED that indicates when the amp is on, a small hole that has a small red LED inside to show that the amp is charging, a DC port and finally a USB cable opening.
On downside to its design, was the input and output jacks that weren’t flush with the faceplate – meaning that inserting and getting out jacks were slightly hard at times. One has to make sure they are fully in, by pushing them well in – I especially found this problem irritating with my earphones.
Overall, I really like the design and looks of the amp – it looks the definitely looks the part. 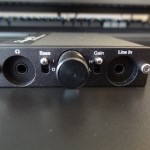 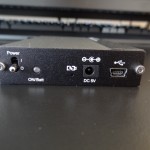 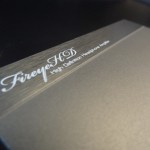 Battery life:
The battery life, for a portable amp is something I think is extremely important. The FireyeHD, really did poorly in terms of battery life. It didn’t last 8hrs on playback, as stated by Firestone. I also found that when I didn’t use the amp for over a month, it would lose charge. If found that quite disappointing and very much something that shouldn’t be an issue on a portable amp like this one.
I should say that when you switch on the amp – a little “click” sound is audible and when switched off, the sound is heard again. Thus when switching on/off the amp the amp will make a noise; a mechanical type sound, not an artificially created one. Thus when flicking the switch, you know when the amp is on, without the need of seeing the bright blue LED shinning. 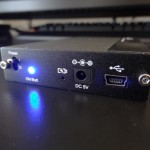 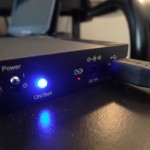 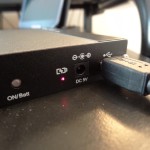 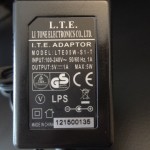 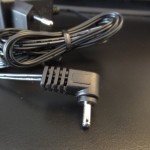 EMI (Electromagnetic interference):
EMI is when a phone transmits and receives a signal and where a listening device can be affected by it. I found that in portable amps, that are placed close to my phone it could cause EMI, meaning an unpleasant noise in your ears (usually quite loud). That said with the FireyeHD, I didn’t notice any EMI, meaning it must be well shielded by its outer metallic shell. 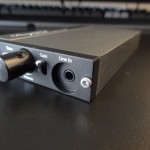 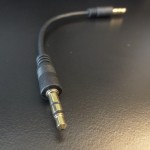 For this section, I will be comparing it to a few amps I have in front of me:
–DigiZoid ZO2
–Just Audio uHA-120
–Epiphany Acoustics EHP-02D

I used my modded Denon AH-D2000 headphones and my Audéo Phonak PFE232 earphones for listening.

It was an interesting mix to have in front of me, as I had nice variety of amps which all had different qualities and traits.
I found the FireyeHD to provide a very interesting sound. It had quite a transparent sound and a good amount of headroom when compared to the DigiZoid ZO2, which was to be expected. On the other hand I found it to sound on-par with the EHP-O2D, but fell short by just a small margin against the uHA-120. I feel that out of the amps I had in front of me, Firestone’s main rival would be the offerings by Just Audio. They both are seemingly in the £150+ price bracket, are designed to be portable and furthermore are supposed to be able to drive high impedance headphones.

As the Just Audio, was its closest rival, I thought to compare the FireyeHD with it first. Settling in at around £220 a £70 premium on the Firestone product, I expected the uHA-120 to beat the FireyeHD in several aspects and it did. The first thing I noticed was that the uHA-120 felt a little more transparent, it also sounded “flatter” and much more neutral than the FireyeHD. In fact, it was a recurring theme for the FireyeHD, even on 0 bass setting, the FireyeHD had an inherent bass response. Which I quite liked, however when reviewing a class AB amp, one would expect the amp to have a neutral frequency response. Thus the sound the FireyeHD was producing was slightly warmer than the uHA-120, meaning the sound felt more bassy to my ears. In terms of driving ability the Firestone HD had huge amounts of power. I felt that it could deliver a higher volume compared the the uHA-120, whilst on high-gain mode. Thus powering high impedance headphones shouldn’t be a problem for the FireyeHD. My D2K’s and PFE232’s were easily powered and furthermore I had a lot more headroom on the Firestone.

Overall, the FireyeHD, compared to its nearest rival did an excellent job, generally speaking – however it would come down to personal taste with its sound being aimed more towards the low end frequency range.

Moving unto the EHP-02D as a comparison, I found that the FireyeHD sounded a little less open in its mid-range. The biggest difference came from the flat response the EHP-O2D has and its clearer mids and highs. The difference between the O2D and the HD were extremely minimal, which is incredibly impressive. That said, as a standalone amplifier the uHA-120 is the best out of the lot, due to its transparent sound and versatility with the vast earphones and headphones I’ve put through it. Of course the EHP-O2D has a DAC function, however as none of the others have a DAC, I’m ignoring that functionality for this review. With this in mind, the EHP-O2D sounds very much like the Firestone FireyeHD, however the FireyeHD as said previously had more focus on the lows rather than the mids. Thus the EHP-O2D and uHA-120 sound flatter and more neutral in comparison.

Finally, unto the DigiZoid ZO2 my favourite amp on-the-go, due to its incredibly small size and capabilities. In this respect, I would prefer to focus on the bass change on the FireyeHD, rather than delve much into its amplification. With that said, I should mention that the FireyeHD provided a cleaner, more transparent and much more powerful amplification, when put up against the ZO2. That was my expectations prior to testing, simply because of my previous experiences with the ZO2 and other amps in its category, like the FiiO E11.
Looking at the bass gains that can be had with the ZO2, I was able to really focus on the audible differences betwen the two amps. It was clear the ZO2 could output a much more prominent bass frequency, when needed – however what surprised me was how the ZO2 was a slight more controlled in its bass reproduction, over the FireyeHD’s bass boost. When the switch was activated on the HD, I felt as if the bass was bumped up and with that the mid-range was slightly affected. This is something I’ve come to experience with earphones that focus mainly on mid-bass, thus losing their finesse in their mid range. With the ZO2 on the other hand the mid range was barely affected by the contour levels being increased.

In conclusion, the FireyeHD is an incredibly good amp, that I really enjoyed listening to, especially for the price of £170, it is a worthwhile investment. However I do see some fall-backs with it: I found the battery life to be relatively short in comparison to the other portable amps. For example the uHA-120 which is in the same league as the FireyeHD, went on for over 20hrs with continuous playback. The DigiZoid ZO2 goes for around the same amount of time without any charge, if not more. Thus the HD really is sub-par performance when it comes to battery life and as a portable amp, one would expect it to last a good amount of time. Furthermore, due to its sensitivity being a little bit picky with certain earphones, I feel as if the HD should be mainly paired with headphones. If someone were to pair these with headphones, they would be normally at home and with that in mind, they could get the EHP-O2D and use that as a DAC too.
Thus, if someone wants an amp on the go, I feel as if the ZO2 or uHA-120 would be the best bet out of the four amps. However if someone wants an amp (and even DAC combo) at home, then they would choose the EHP-O2D, due to its more versatile sound and more so its cheaper bang for buck.
I would like to see the FireyeHD at a cheaper price than £170 – and I think at $130, which is £82 the FireyeHD would be a much bigger success with audiophiles, as it bridges that gap between price and performance.
So what am I trying to say?
It all depends on taste for starters, with what type of amp you want – a little warmth/fun or a fully transparent and “clean” sounding amp. Once you make up your mind and happen to choose a warm signature (which is my personal preference as a listener), will be hooking it up to headphones or earphones that aren’t sensitive and finally if you live in the USA, where you can buy it for $130 you should buy the FireyeHD.
Great amp for that US price, good all-rounder nevertheless at the £170 price-tag, but has a lot of competition at that higher price bracket.