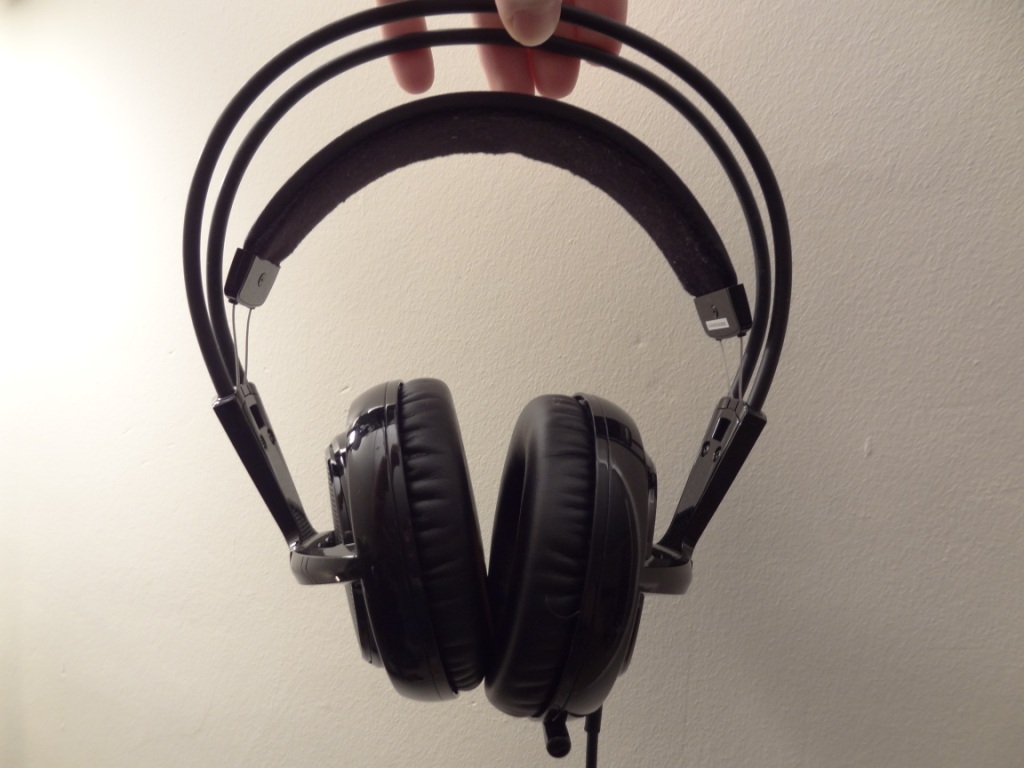 First of all I would like to thank SteelSeries for sending me their headset for review. I reviewed the headset when they initially got launched at their higher price tag of around £100. Since then they have dropped to around £80, making them very attractive. It can be found on AmazonUK & AmazonUSA.
More information about the headset and its specifications can be found on SteelSeries’ website.

I was a little sceptical at first with the headset, as I was concerned about the overall sound quality the headset would have produced. However, the Heat Orange Gaming Headset really did impress me. Before going into my written review, I had previously made a video review where I gave the headset a full 10/10 rating. Since, I’ve decided to drop it by a rating to 9/10 (more on this through the review).

Now let’s get into the written review:

The build quality of the headset is extremely good – so much so that it was hard to find any faults with it. The only thing that really came to my mind whilst I was using it, was the positioning of the mute/volume control, which is located on the wire. The reason I mention this, is because the little control pod wasn’t nearer the headset, but instead half-way between the wire. This meant that the control pod had to be placed just by the keyboard, which made it a little awkward to type at times. It can be easily overcome, by placing the wire underneath your keyboard, however I know some keyboards don’t have wire management under the keyboard, thus meaning it might be uncomfortable for the gamer to play games or listen to music, whilst using the headset.
On the subject of the control pod, I really did love the controls you had on it. Simple, yet effective. A mute button, that works flawlessly in muting your mic and a volume wheel that allows you to control the volume of the headset with ease. 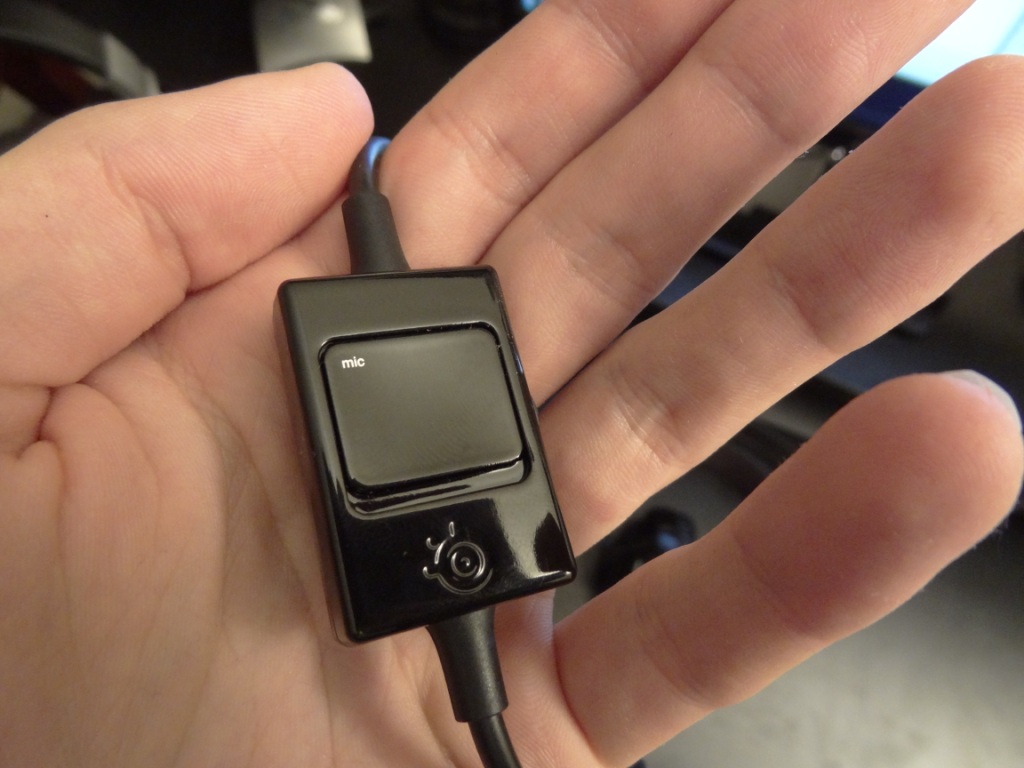 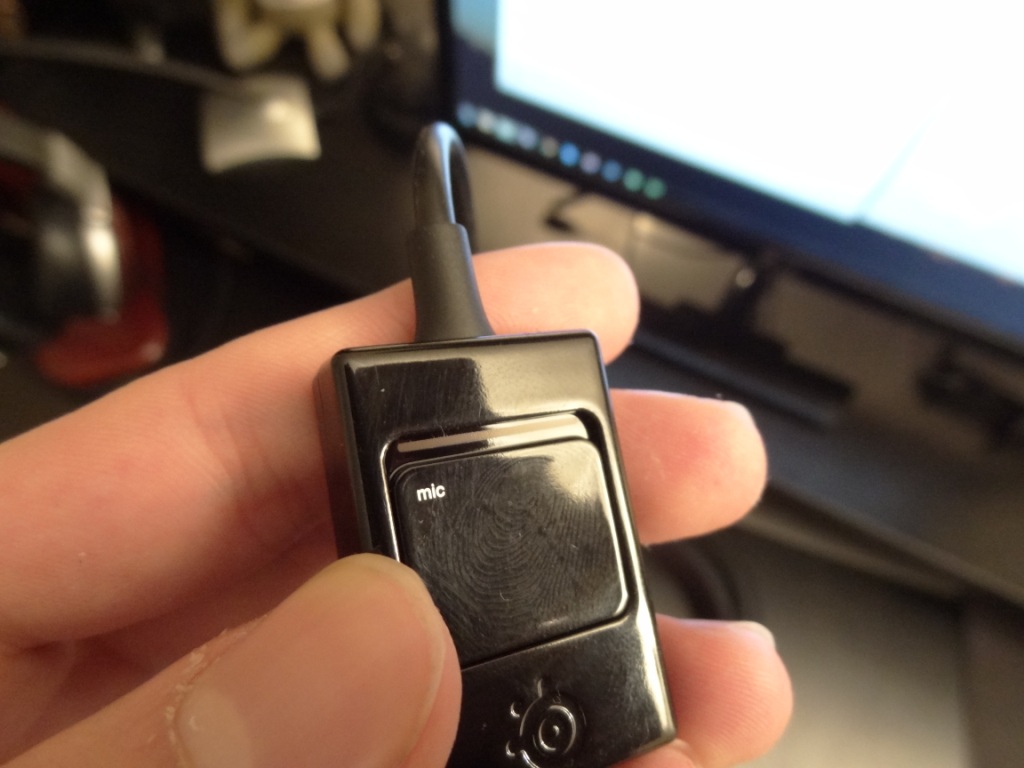 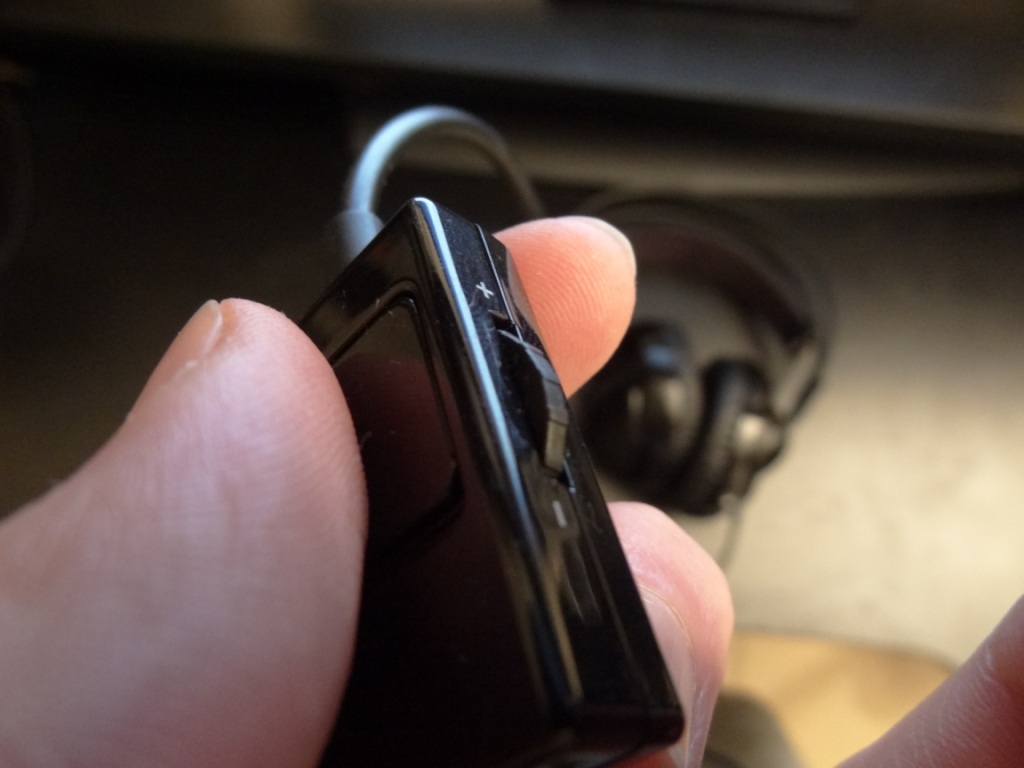 Other than that point, the headset really does excel in every domain. What I like most is the headband design, which has a suspension headband. This type of design is great as it is much more comfortable for longer periods of time. In essence it means that the headband of the headset doesn’t dig into your head. 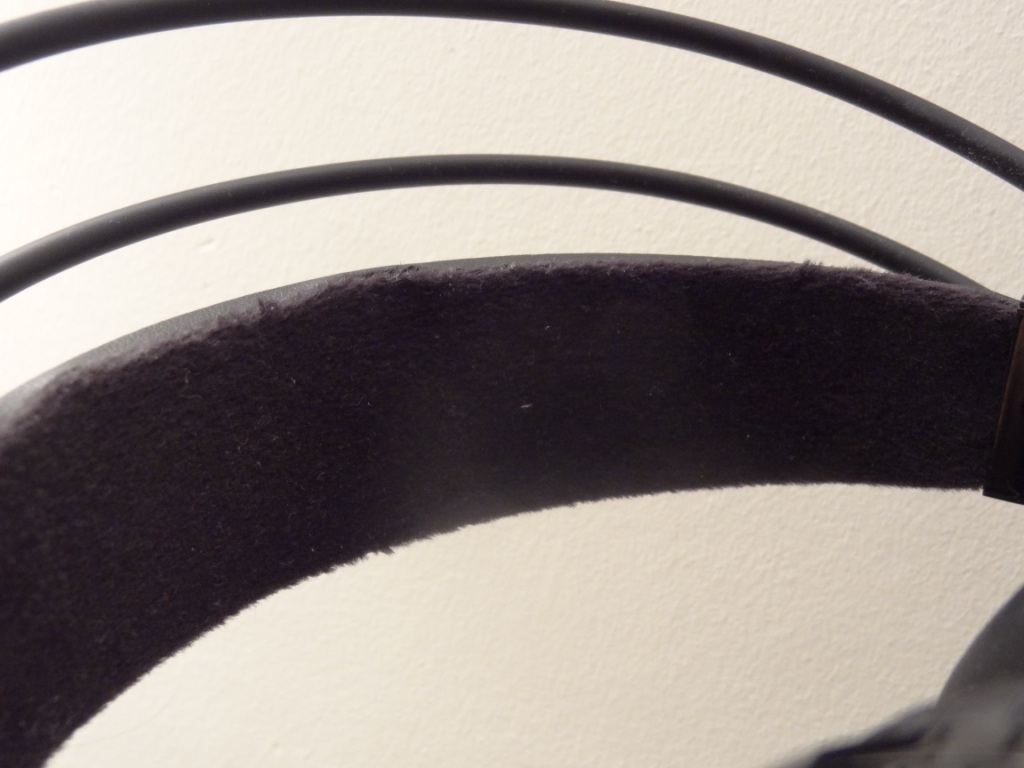 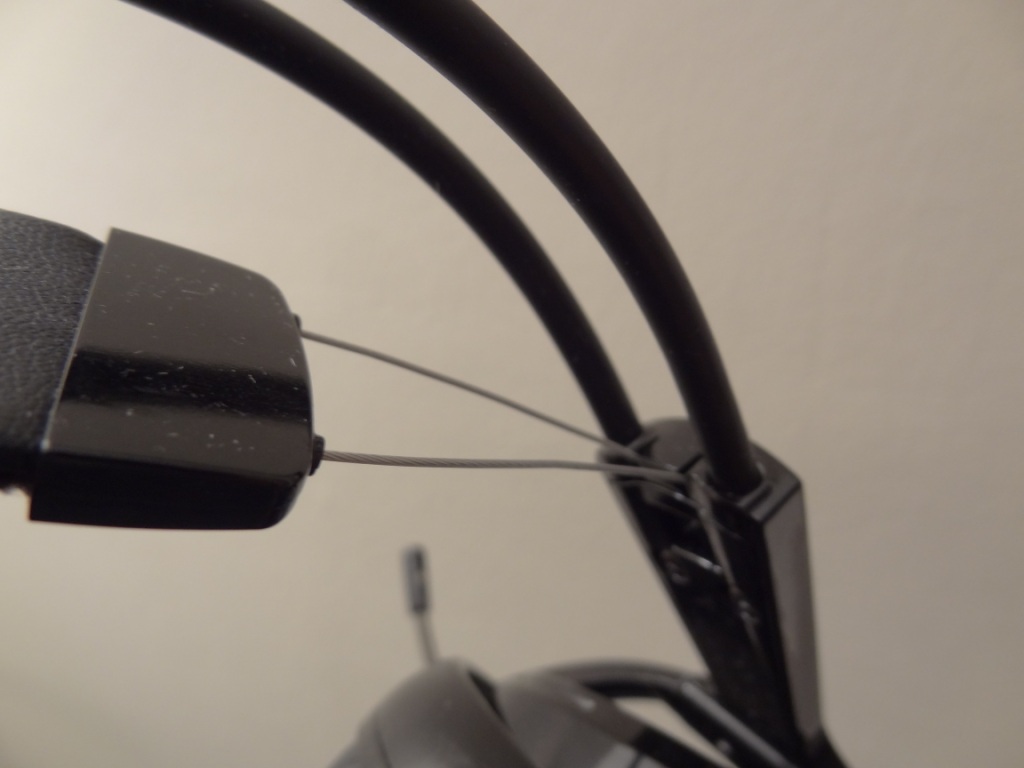 The headband itself is also made out of a soft material, which is slightly padded, again aiding comfort. The overall assembly of the headband is also very well thought out. It has a left and right indicator on the sides of the drivers, this is good as it allows you to easily distinguish right and left. With that said, the microphone is place on the left hand side and the SteelSeries name is written at the top of the headband, allowing you to easily distinguish right and left. Thus it is still a nice touch to have the left and right indicators clearly marked on the sides of the headset. 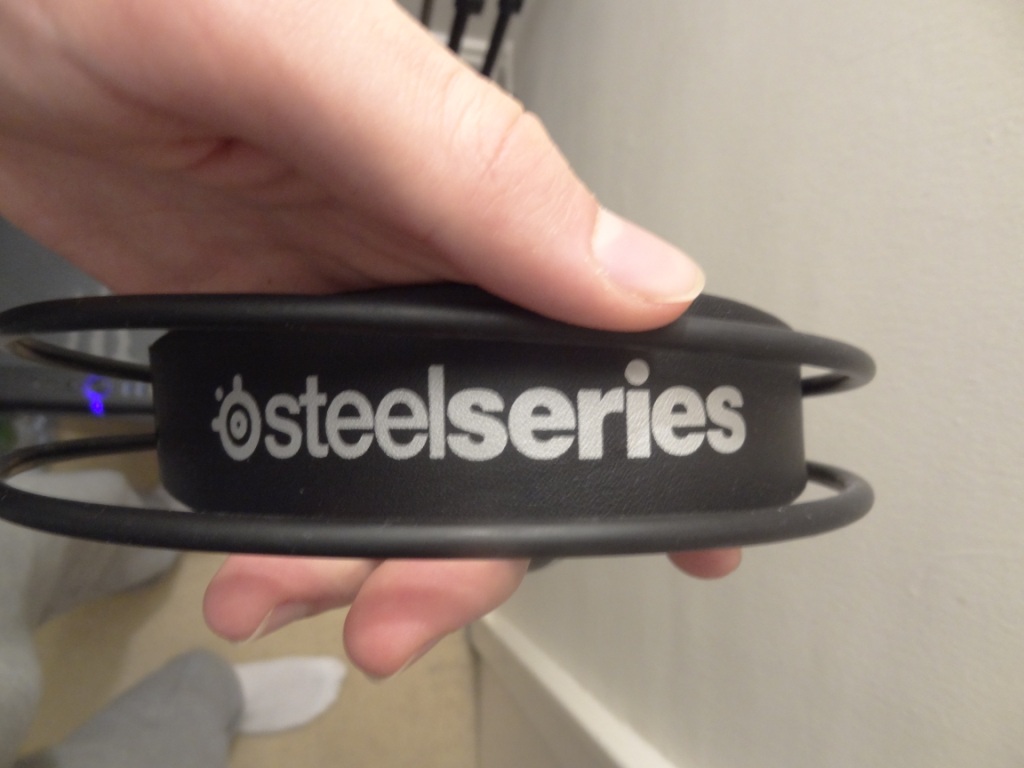 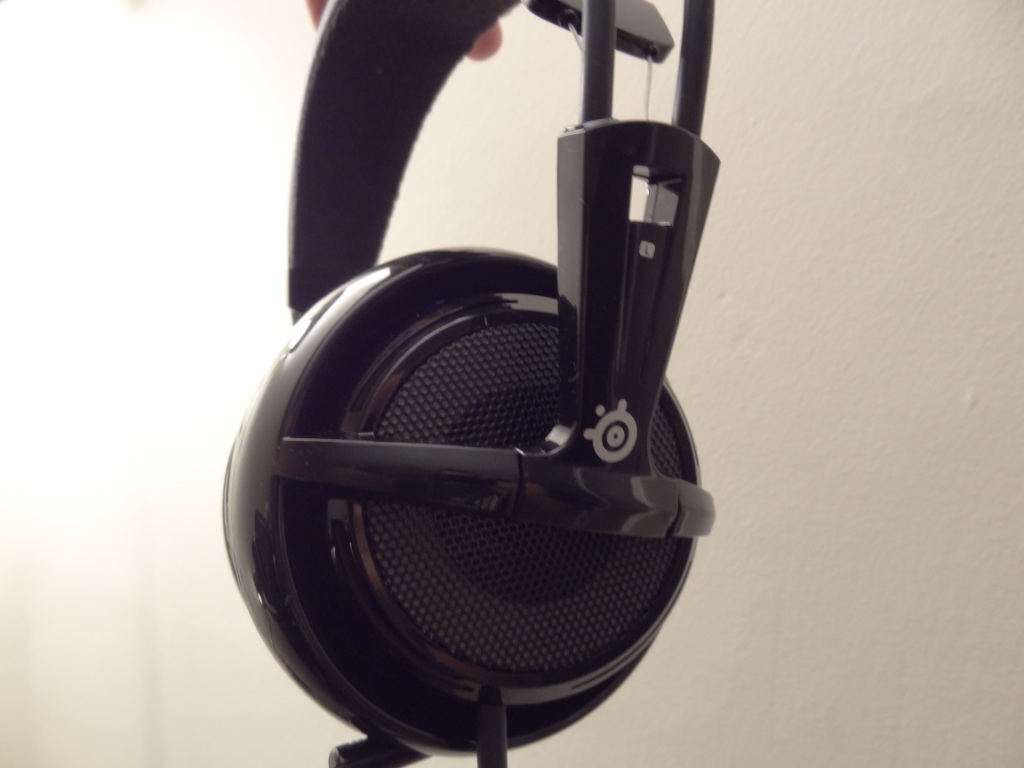 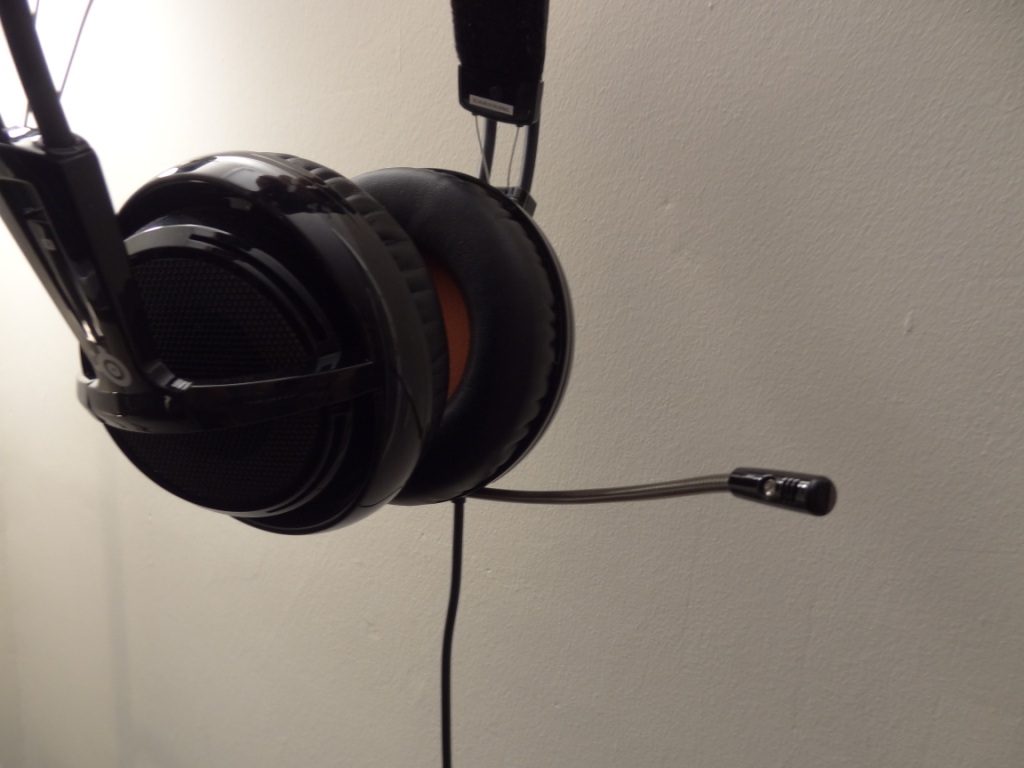 Finally, the Heat Orange model has orange LEDs that can be customised via the software. It can be modified in a variety of ways, you can change its intensity (off, low, medium, high) and pulsation (steady, slow, medium, fast, trigger). What I find really cool, although a little pointless at the same time, is the trigger functionality that you can use. This basically makes the LEDs respond to sound peaks. For example, if you were to hear an explosion the headset would suddenly light up; if you were to shoot your gun in the game then the headset would light up based on your gun fire sounds.
This is a nice touch from SteelSeries, but in the same respect something a little pointless as gamers won’t be able to see it. I guess it could be cool in competitions or something you can use to show off to your friends.
The LEDs are one of the main selling points of the headset and I must say they do look very nice. I did however notice over long periods of usage the headsets got a little warm and one could only presume it was due tot he LEDs being on constantly. 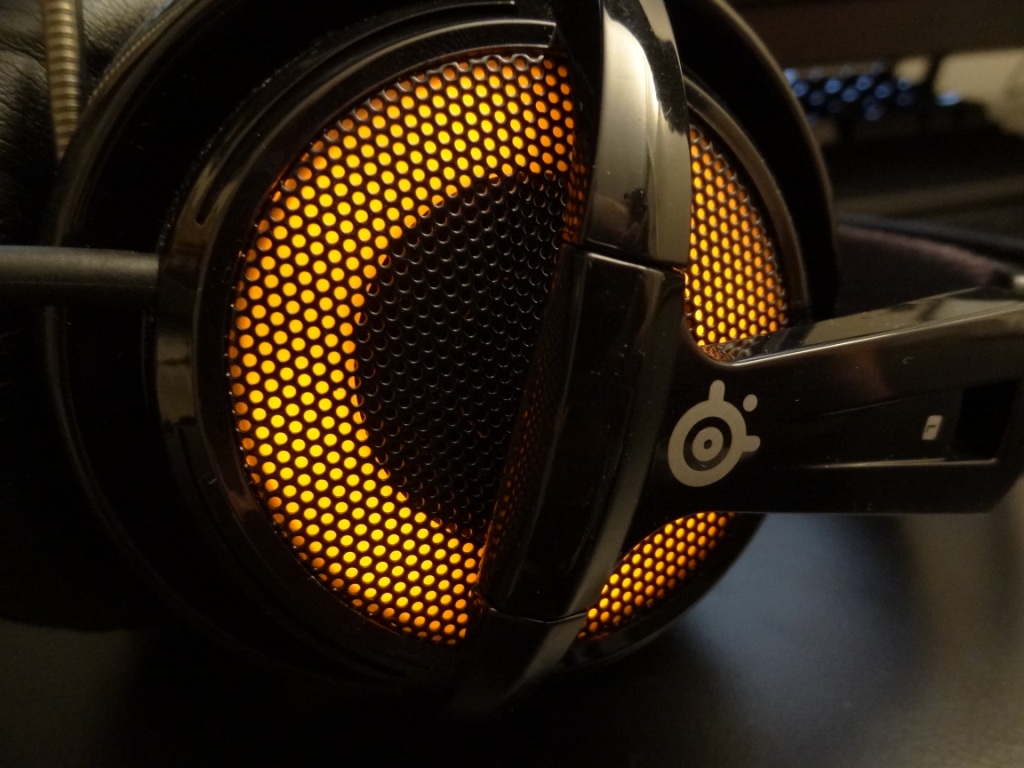 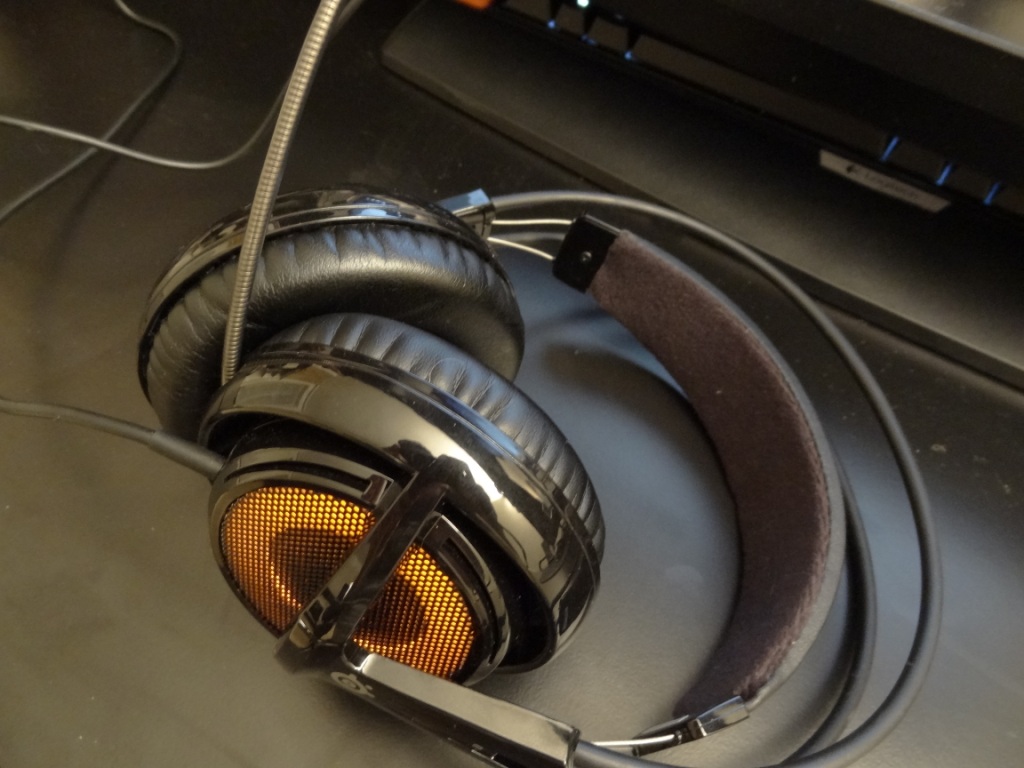 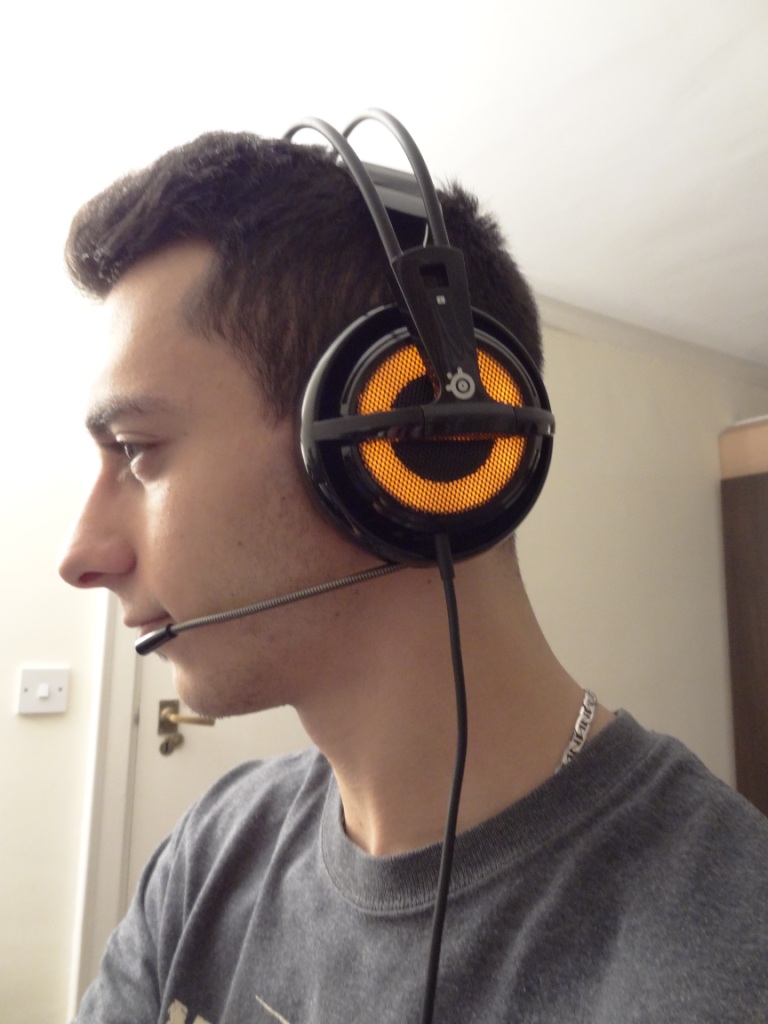 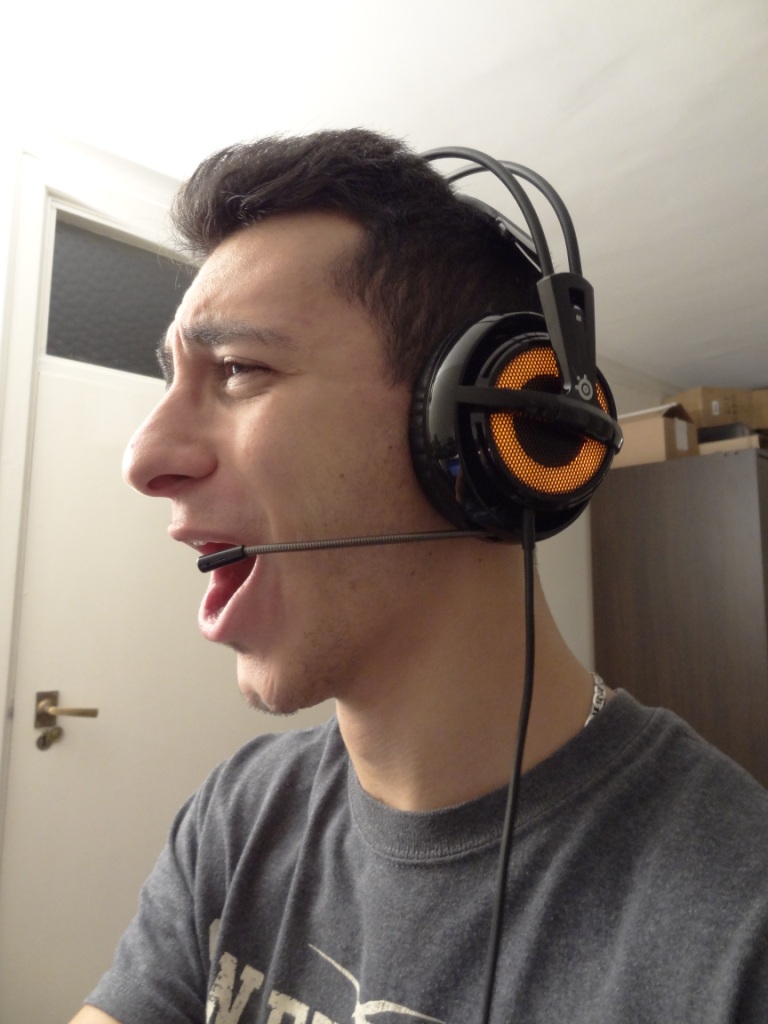 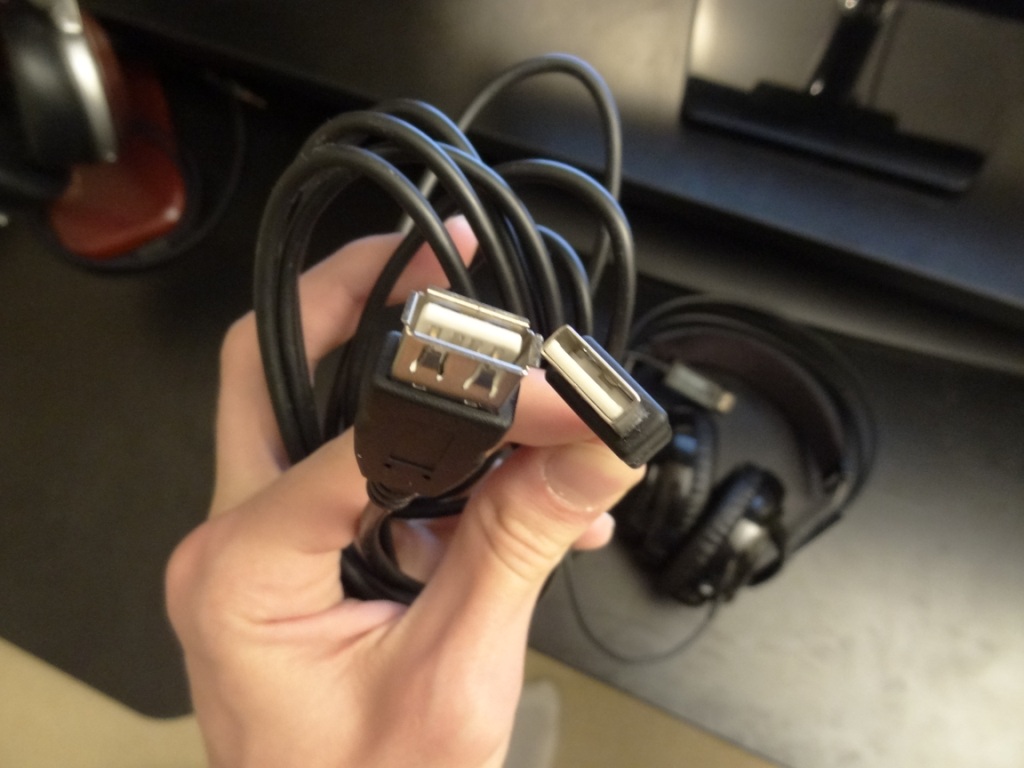 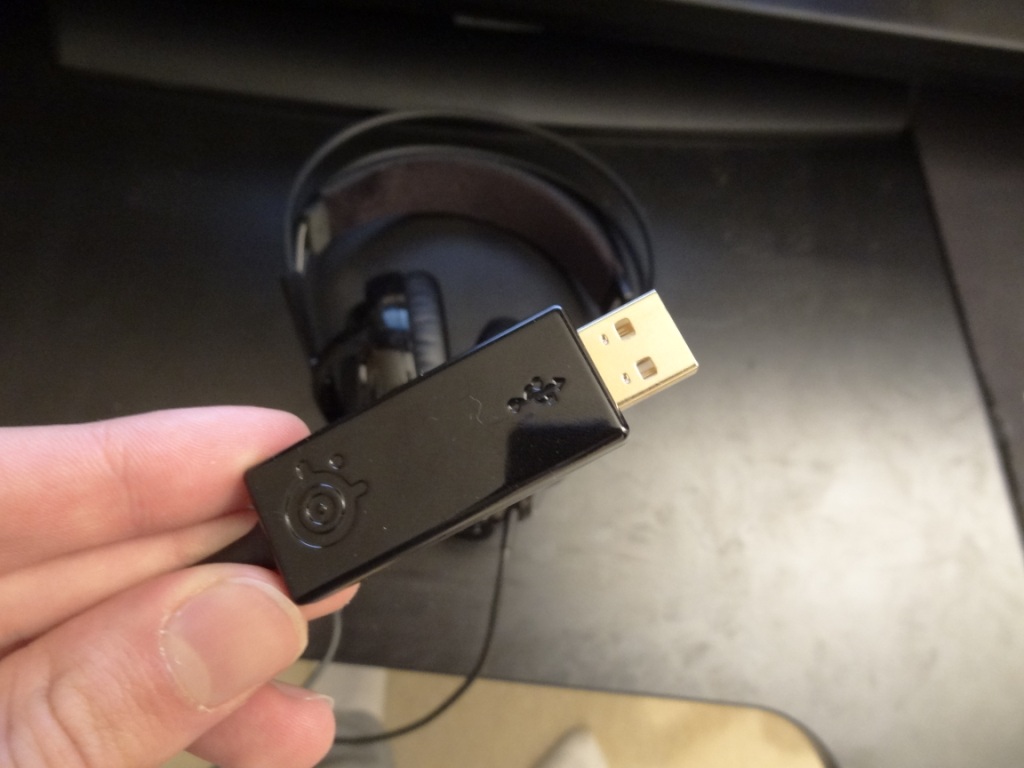 Overall, the build quality is hard to fault. It is very much impressive that SteelSeries thought about how a headset should or would be used. 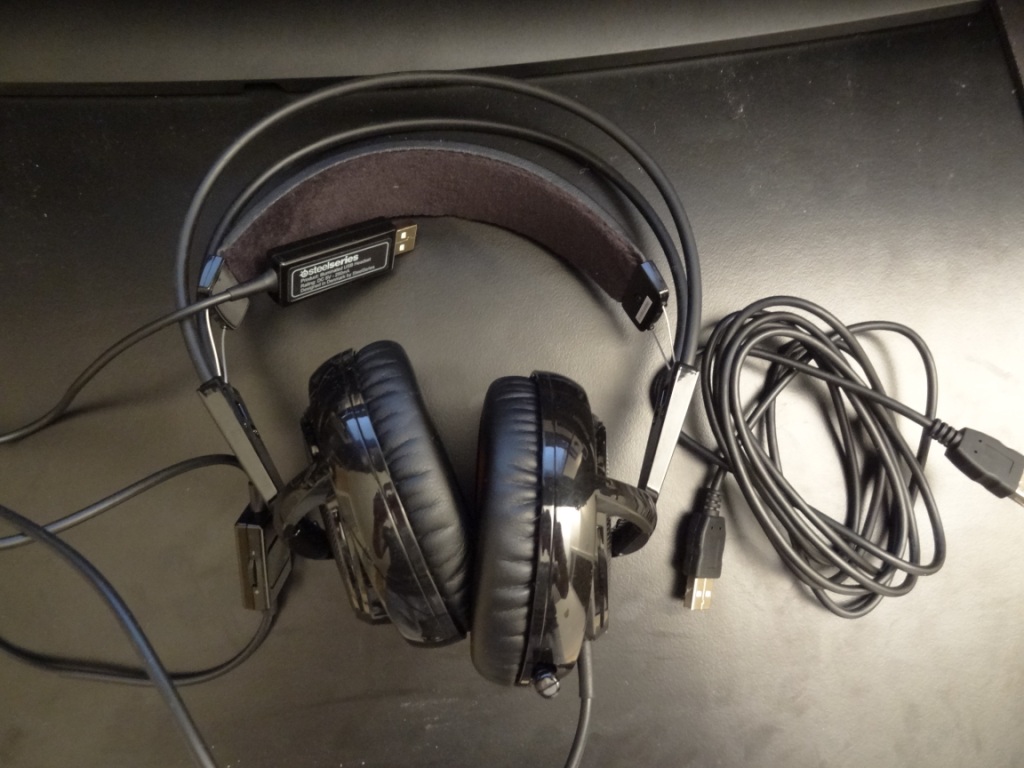 I touched upon the comfort in the build quality section above, although I felt it deserved its own category. The comfort of the headband as previously mentioned is very well made and thus leads to great comfort. The construction of the headband makes it so that you can wear them for an extended period of time, without worrying of the headset either digging into your head due to its weight or headband construction. This is also something that should be mentioned, is the overall weight of the headset. As it is light, it means that it is very much comfortable for extended periods of time.
With that said there was a point of concern for me and that was leading to its pads. The pads on the headphone are reasonably thin and this means after a long session of gaming, I felt my ear was touching the inner driver. Furthermore, if you are like me and wear glasses, then you’ll find it slightly uncomfortable with any sort of usage over 1hr.

The comfort is thus good, but not perfect. I think the Siberia Elite would address this issue, with its thicker pad design. 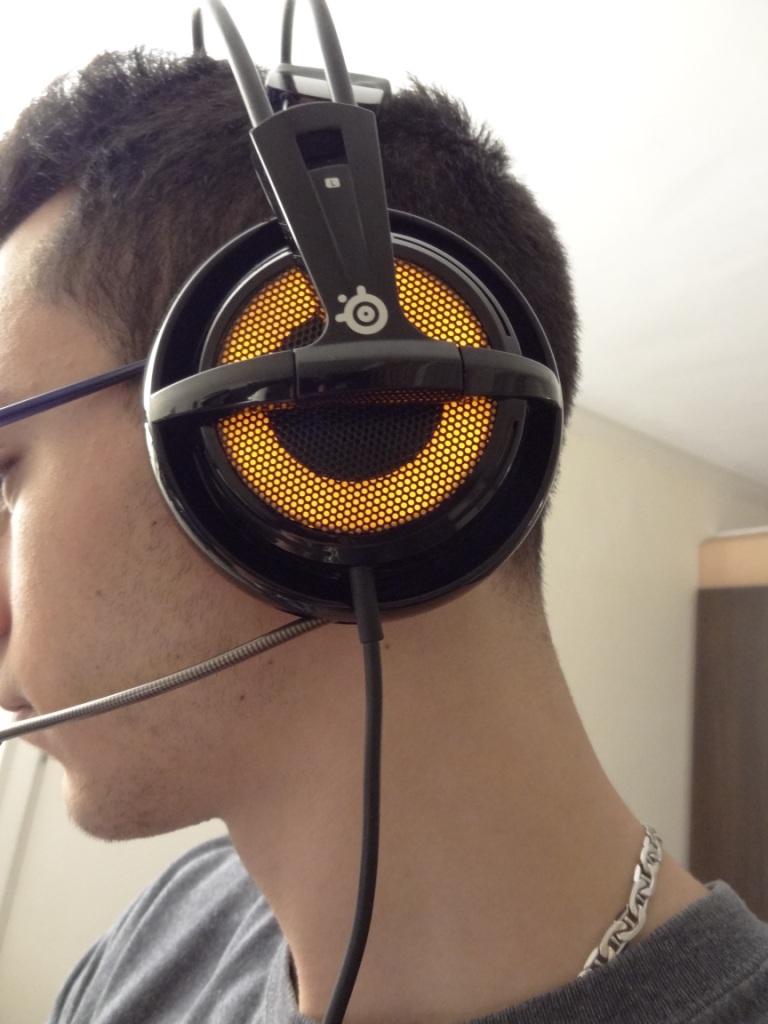 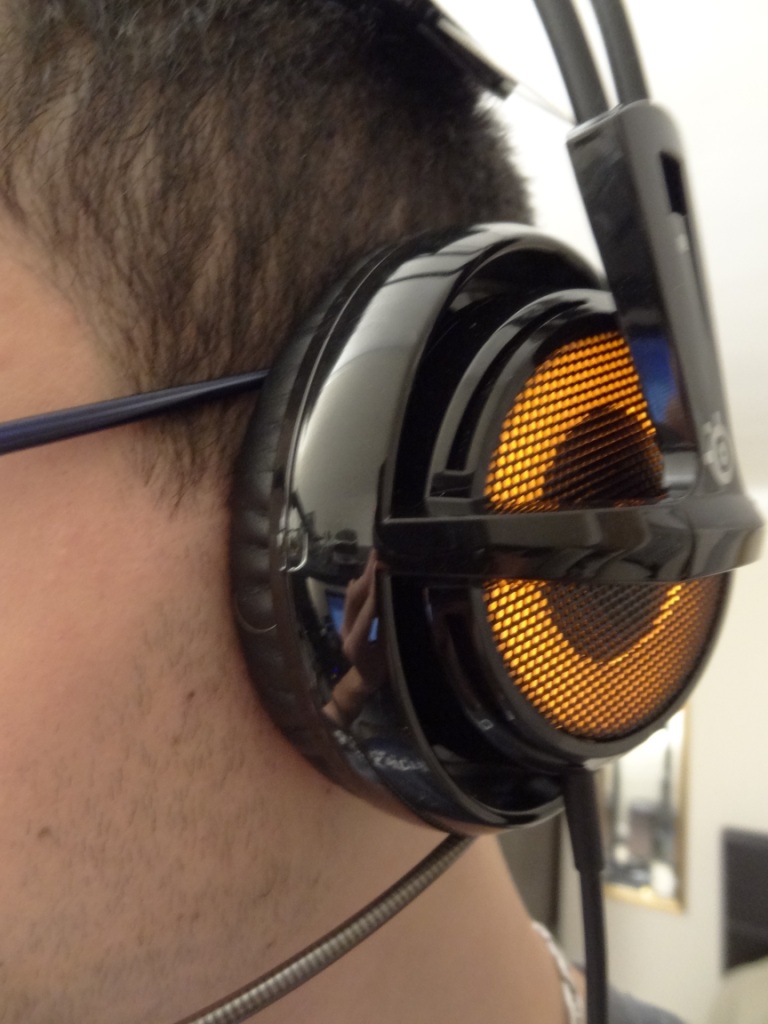 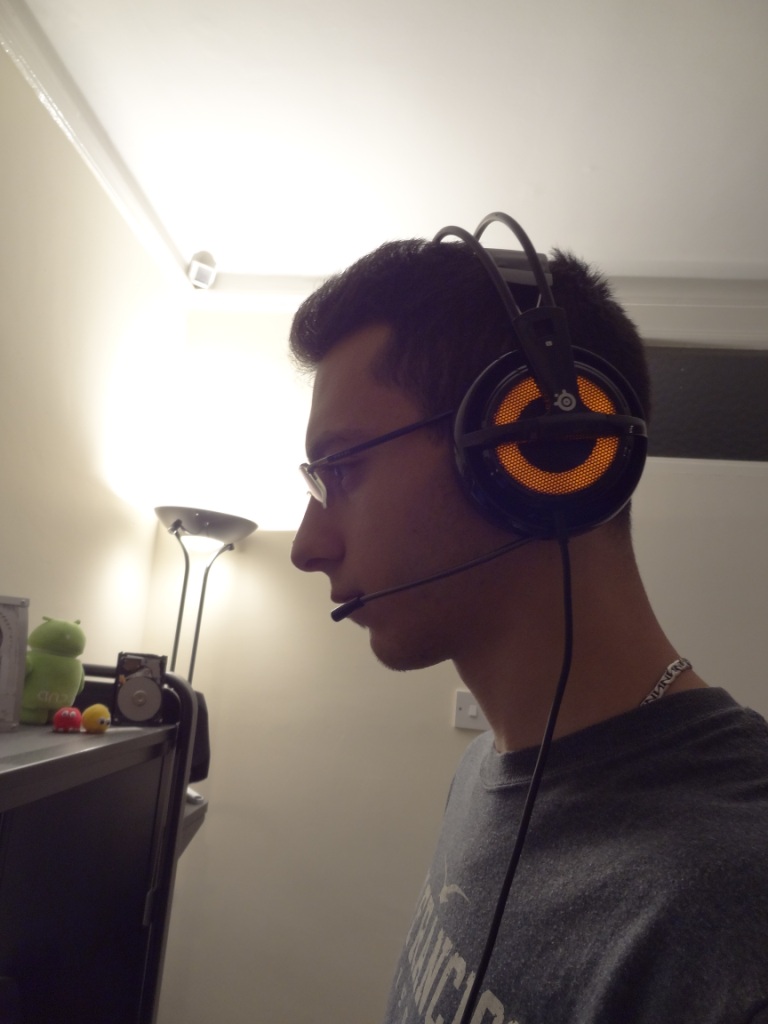 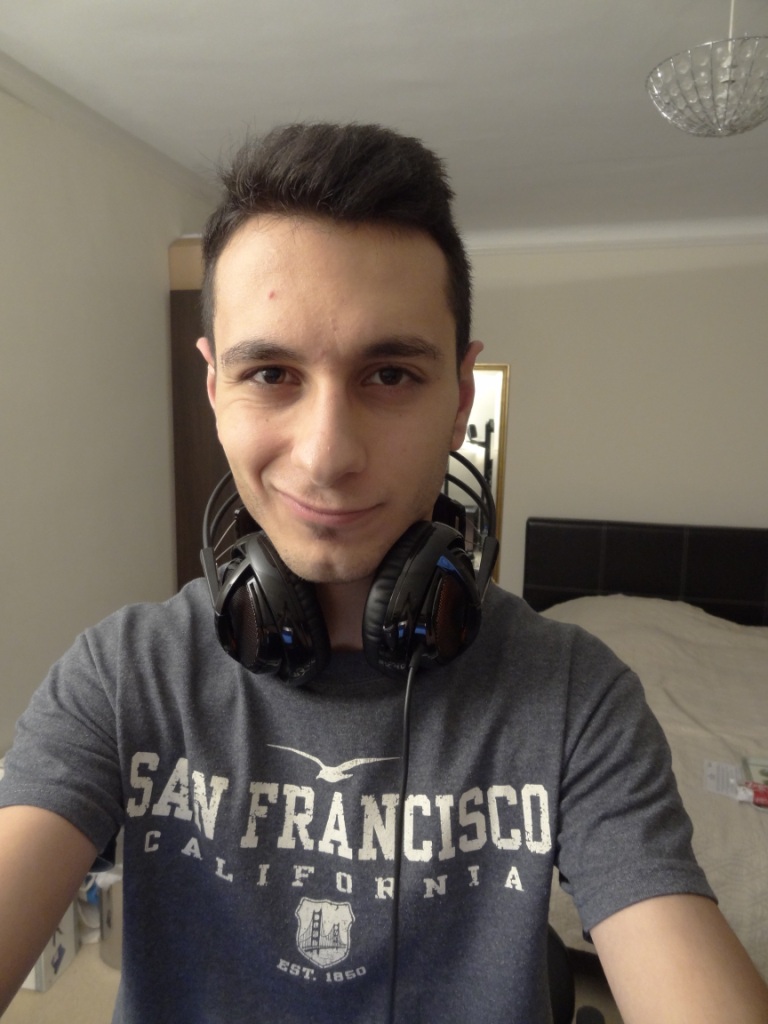 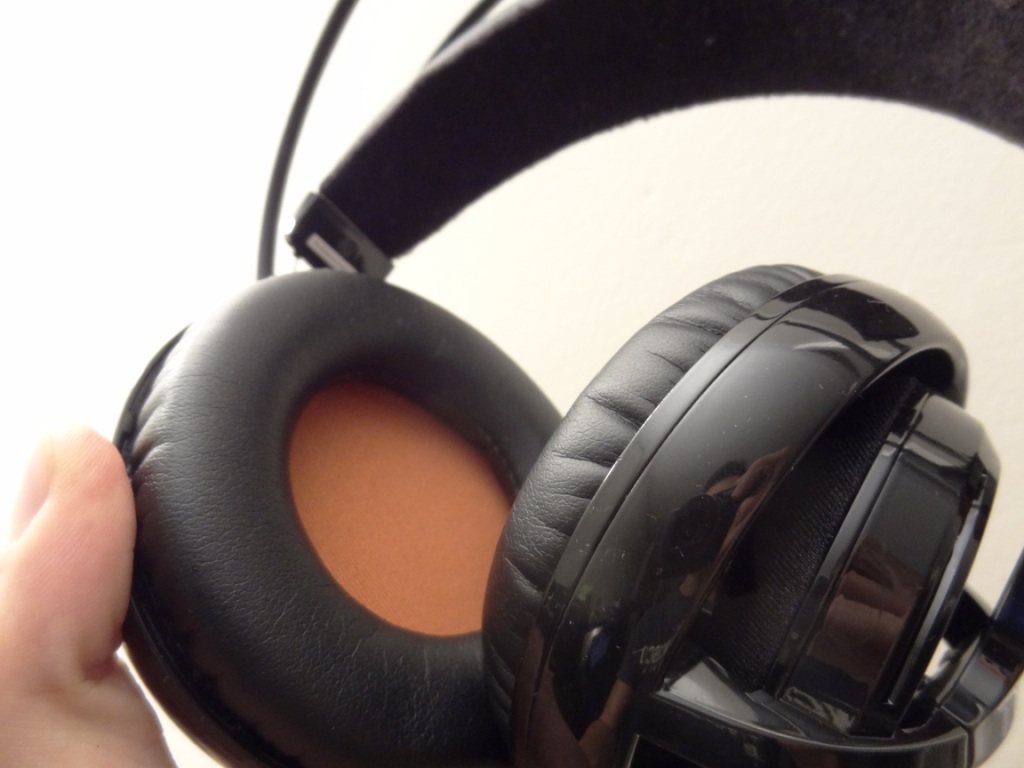 The sound quality was something that was worrying me, as I have a background of reviewing more audiophile grade headphones and earphones, I was a little worried what this headset would produce sonically. The reason I’m saying this, is because of my previous experiences with headsets I’ve heard in the past – I’ve had a poor experience with other headsets.
The Siberia V2 on the other hand, really surprised me.
I don’t think it is fair to compare a headset to a headphone in terms of sound quality only, but with that said I was extremly impressed that it left me thinking the Siberia V2’s sounded like a dumbed down version of my AKG K545’s (which I found to be an absolutely excellent set of headphones) – The Siberia V2 had a lot of the same characteristics as the AKG’s – the mids and highs were quite clear, whilst the bass was its weakest point. Furthermore, the soundstage of the Siberia V2 (due to its open back design), reminded me greatly of the AKG’s open and wide sound. This is very much desired for gaming, as it provides a better imaging and a deeper immersion in the game, due to a wider soundstage. 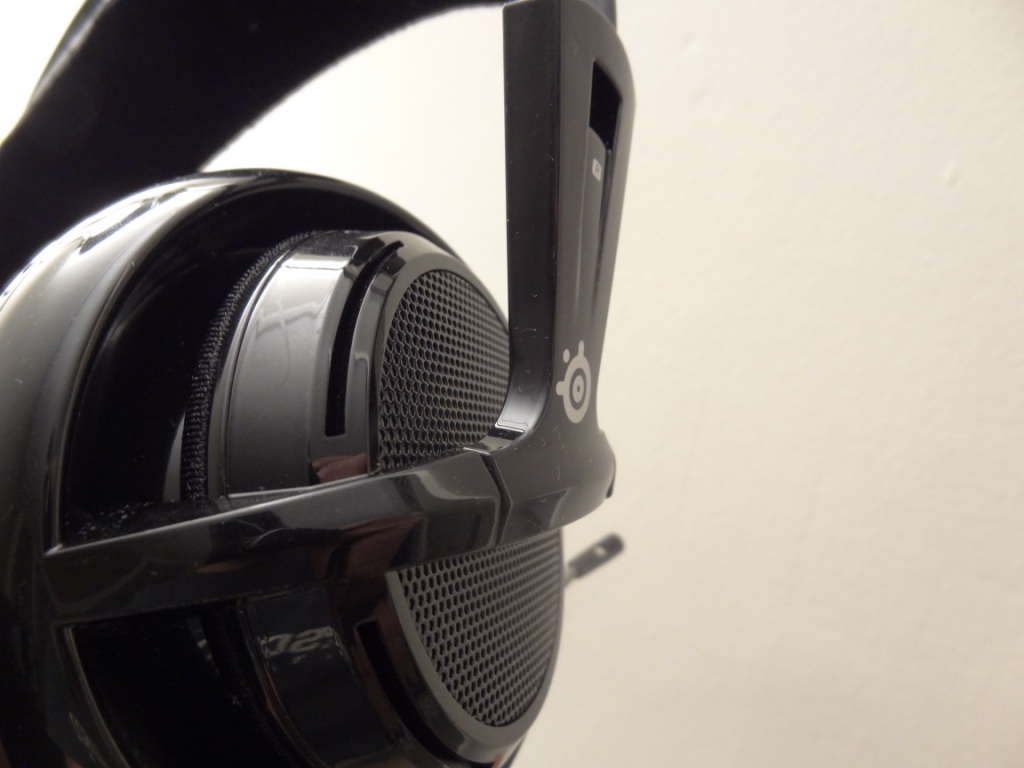 As said above, the bass wasn’t the Siberia V2’s strongest points. Explosions in games felt a little “muffled” and rolled off. This is because the headset had a little trouble extending those low end tones. I confirmed my thoughts, when I played music through the headset.
In terms of the mids and highs, I was very much surprised on how well it did. The mids were slightly veiled and the highs were slightly rolled off – but other than that, I was very much impressed.

Overall the sound quality was very good, I was very much impressed with it and really left me with a smile on my face. As for the isolation, on the other hand, they didn’t fair too well. This is because of their open back design. Isolation shouldn’t really matter at home, however there are households that need good isolation (from siblings) or a gamer that doesn’t want music to leak much sounds. Unfortunately, if you’re looking for something that isolates well or doesn’t leak music, then I would suggest looking for close-back headsets. 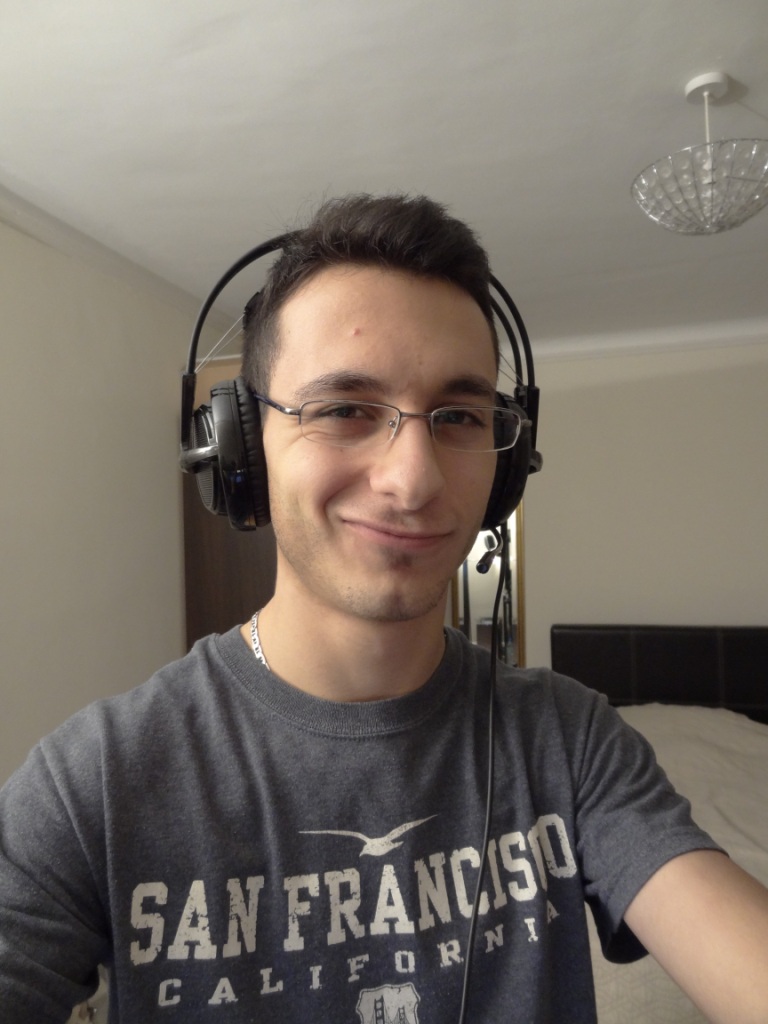 The microphone quality was something that was going to be very important. Especially with the Heat Orange model sporting an active noise cancelling mic, it is one of the headset’s selling points.
I was impressed with the microphone quality, whilst nothing was playing (ie when I was just recording), however when music started playing (you’ll be able to hear the difference in my video review linked at the start) the noise cancelling kicked in. Unfortunately, I didn’t like the noise cancelling part of the mic. I do appreciate why it is there and how it performs, but unfortunately, when it came to the recording quality, whilst listening to something on the headphone, it cause the mic to be severely effected. That’s not to say the mic quality was bad, but it was dampened, due to the noise cancelling feature that was included. The sound wasn’t as clear and thus sounded a little muffled.
With that said, you could still clearly hear what someone is saying with the headset on and wouldn’t have any issues with its clarity. 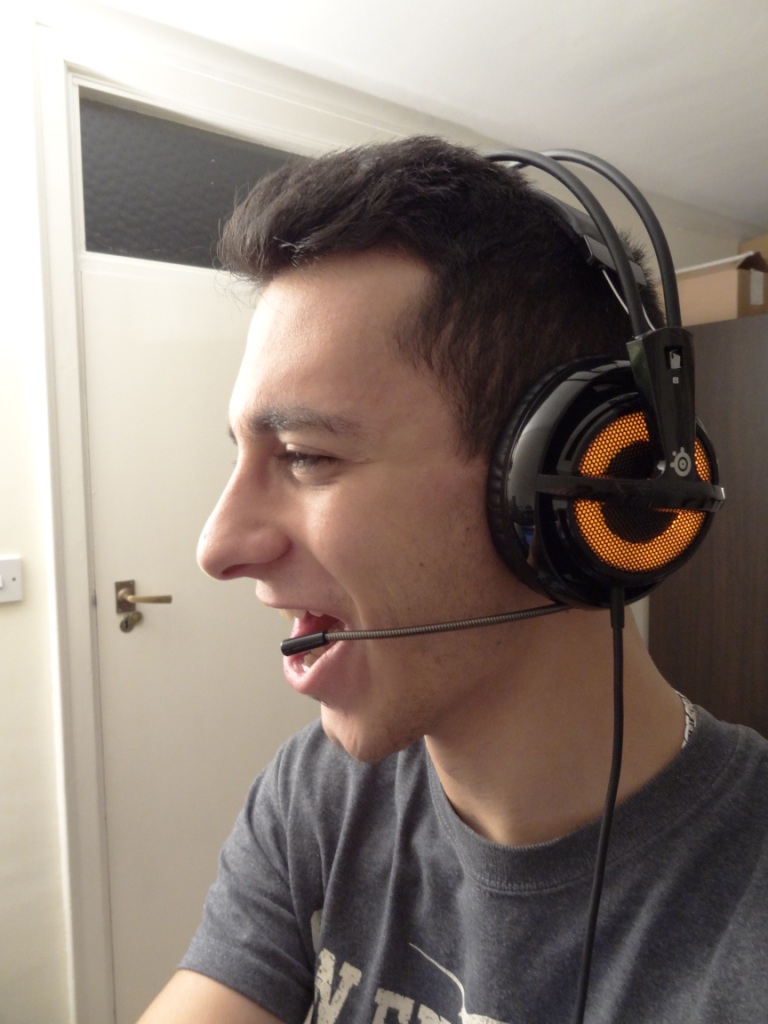 Thus, the recording quality was good for a gaming headset, but when you compared it to a microphone (ie my Logitech USB mic) it was a shame to see it under-perform when sound was being played through it. This meant, I wouldn’t feel as comfortable gaming with it, with my mic on and recording my mic whilst gaming, with these on. I would prefer the Logitech USB mic in that respect.

The software was something I didn’t really like at all – as it conflicted with my Logitech gaming and Anker software. Others had demonstrated this on certain forums, so I thought to make a video about it and show you how the SteelSeries products would conflict with other software out there:

Thus, because of this my experiences with the provided software were a little negative. However it should be said, if you don’t have other software included on your PC, then you’ll find the software to be adequate for your needs.
I liked the fact that it was simple and easy to use. There was an EQ functionality, profile switching and more so the ability to customise the intensity and pulsation of your gaming headset.

Overall, the software can cause problems with other software that you might have included and because of this, I couldn’t give it a higher rating. However, when I pull the software on its own and review it, I think it does a marvellous job in all respects. 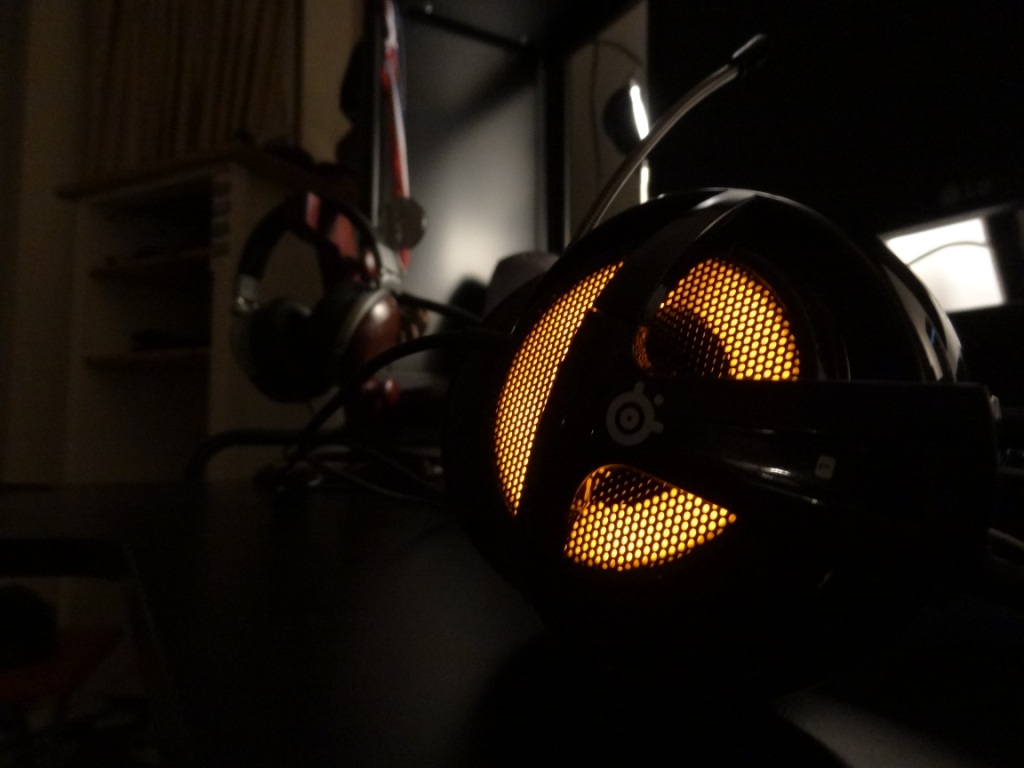 In conclusion, I was really impressed with the SteelSeries Heat Orange Gaming Headset. It did all the things it had to do and performed very well sonically. I thus couldn’t give it a lower rating of 9/10 as an overall piece of equipment. Especially seeing as it can now be bought for a cheaper price. I didn’t feel it was fair to give it a full 10/10 (even though I had previously done so in my video), as the comfort issues were slightly concerning for people who game for hours on end with reading glasses, like myself and furthermore the microphone quality whilst playing was a little disappointing.
Overall, the headset is very much recommended by myself. I really enjoyed using it and would definitely suggest it to users out there looking to buy a new headset for their gaming rig. 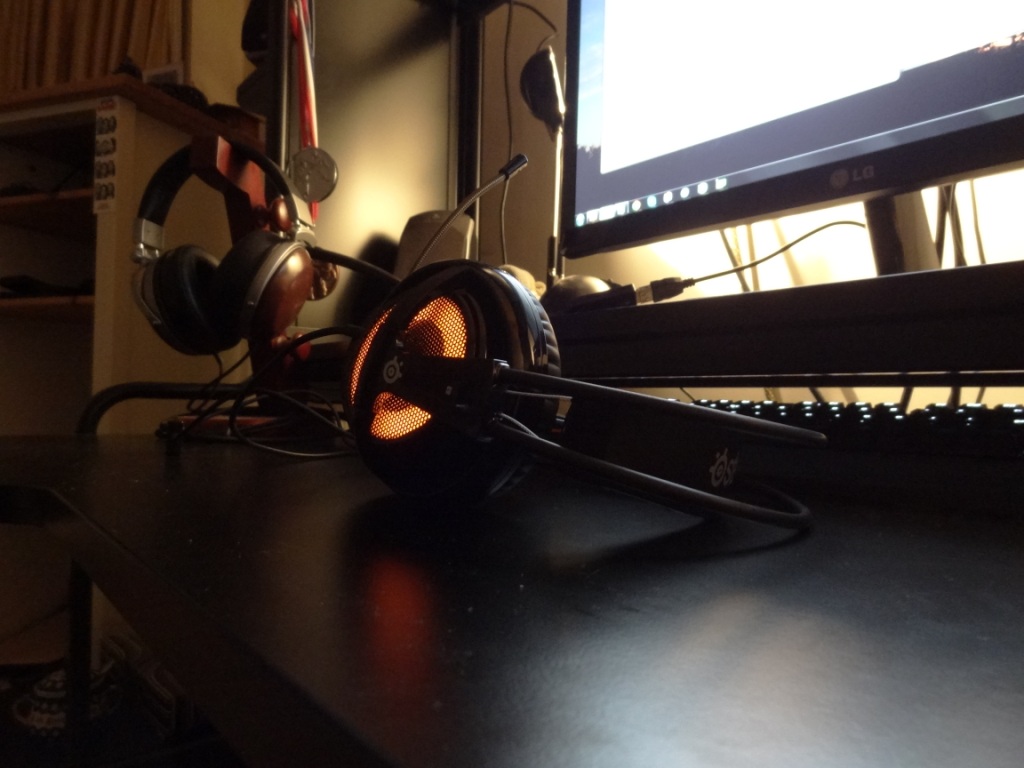